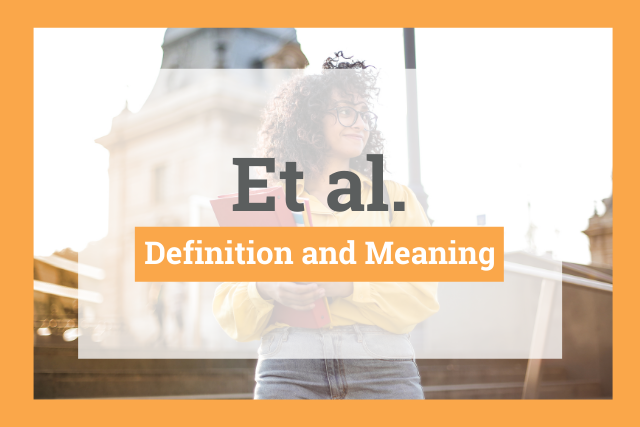 If you’ve read research-based articles or studies, academic papers, or other scholarly writing, you’ve probably seen the abbreviation et al. used, specifically after an author’s name, like this:

In that sentence, and all others, et al. is a reference to other people. “King” is not the only author of “the report.” The et al. tells us that there were other contributors.

Et al. is an abbreviation that means “and others.” 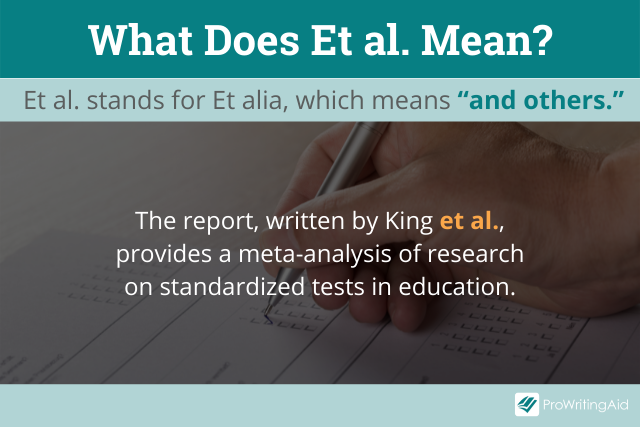 Et al. is an abbreviation for these Latin phrases. The phrases all mean “and others” but have distinctions based on the gender of the “others” referenced.

In current usage, et al. is understood to abbreviate et alia, the neutral form of the Latin phrase.

The most common contexts for et al. are in-text citations, or bibliographical entries, or footnotes of scholarly writing. Authors, editors, or additional contributors to work are the “others” represented by et al.

The abbreviation avoids having to include extensive lists of authors or contributors in those contexts, and stands for two or more names. 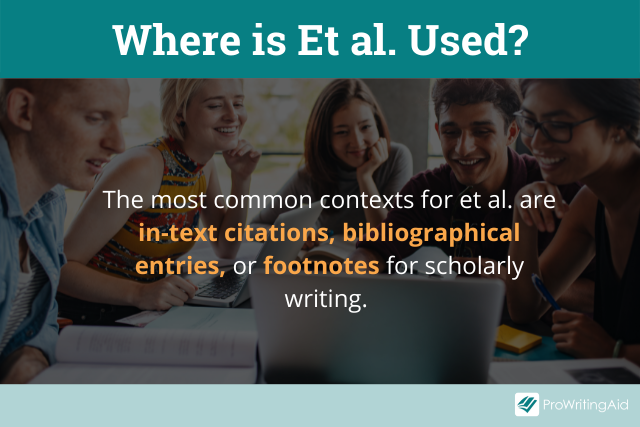 What Does Et al. Mean in a Citation?

When you see et al. in a citation, it means multiple authors, not just those specifically named in the citation, contributed to the work cited.

In MLA and APA style citations, when a work has three or more authors, include the name of the first author followed by et al.

In Chicago style, if a work has more than three authors, list the first three followed by et al.

All style guides are updated regularly and have different requirements for listing authors in a first citation and subsequent citations. Be certain to stay current with the style requirements. 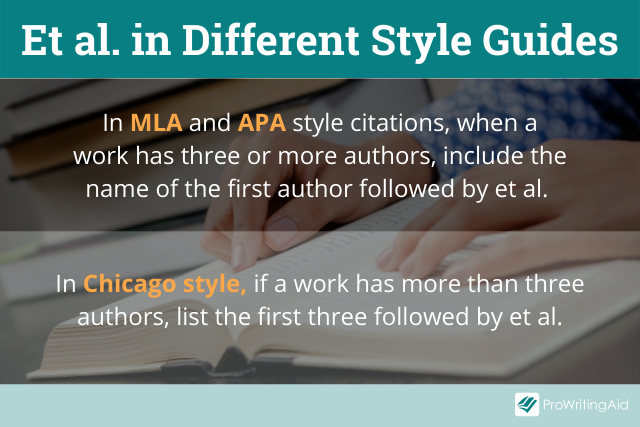 How to Use Et al. for Et Alibi

Use et al. to mean et alibi or “and elsewhere” when referring to locations. For example, if you’ve conducted business in a variety of countries, you could say:

Though it is not common practice anymore, et al. (for et alibi), has been used at the end of footnotes to indicate that a passage or item appeared elsewhere in the text. For example, in a book explaining figurative language, an explanatory footnote might say:

How to Punctuate Et al. 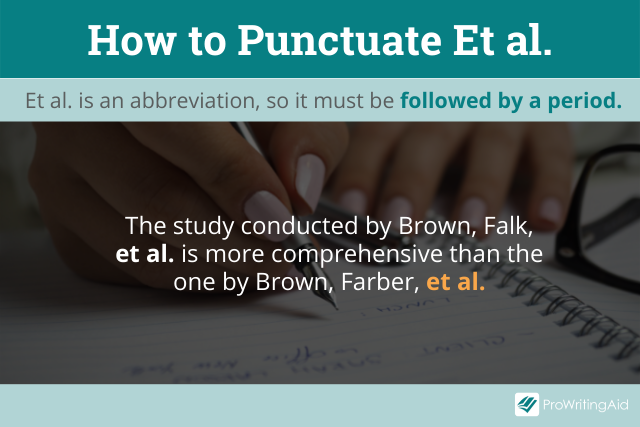 Et al. is an abbreviation, so it must be followed by a period. It does not have to be italicized, though some publications or style guides may have that requirement.

If you’re afraid you might forget to add that period, don’t worry. Running your work through ProWritingAid’s Realtime Report will catch the omission and remind you to add it.

Only place a comma before et al. when you’re including more than one name in your citation, such as when two or more cited works share the same author or have different authors who share the same last name. If you need punctuation after et al., keep the period and add that additional punctuation mark, such as the comma below:

If et al. ends your question, add the question mark after the period, like this:

If et al. appears at the end of the sentence, do not add a second period.

In APA parenthetical citations, put a comma between et al. and the year of publication, like this:

The most common context for et al. is scholarly works; however, you will find it in popular publications.

In these contexts, et al. still mainly represents people but sometimes represents names of other things, such as films or companies, that share a common purpose. For example, rather than list the names of all fast-food chains, a writer might say:

Imagine if someone asks you who is on your wedding invite list. You could say, “The Smiths, The Greens, Aunt Sue, et al.” but you might get a strange look in response! Saying “and a bunch of my other friends and relatives” is a better approach.

Similarly, et al. doesn’t fit the tone of professional email greetings. Emails usually start with Dear or Hello or Good Morning, professional yet friendly terms. Et al. doesn’t align with that professional, friendly email tone. Since et al. is not commonly used in greetings and may be unfamiliar to some of the email’s recipients, your “Dear Ellen et al.” greeting is likely to cause confusion.

Examples of Et al. in a Sentence 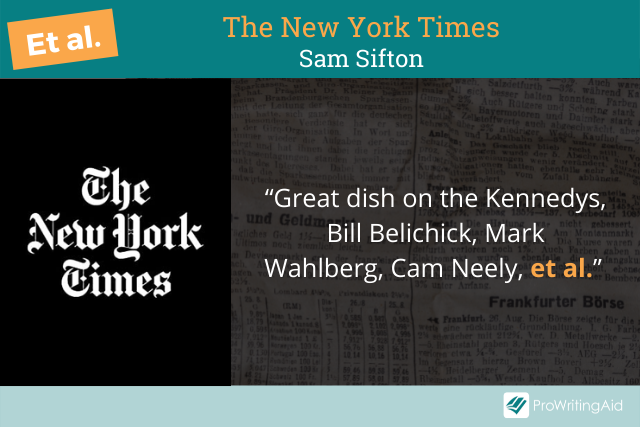 “...it’s hard to shake the suspicion that Toy Story 4’s creation was motivated less by a passion to further explore the lives of Woody, Jessie, Buzz Lightyear, et al., than by a passion to make another billion dollars.”—Slate.com, Dana Stevens, “The Best Part of Toy Story Four…”

How is et al. different from etc.?

Et al., which means “and others,” refers to people or names.

Etc. is the abbreviation for the Latin phrase etcetera and means “and the rest” or “and so on.”

Etc. does not refer to specific people or names like et al. does, and is most often used in lists of things.

Follow etc. with a period, like all abbreviations. If it appears in the middle of a sentence and requires punctuation, put the mark after the period. If etc. appears at the end of the sentence, do not add a second period. 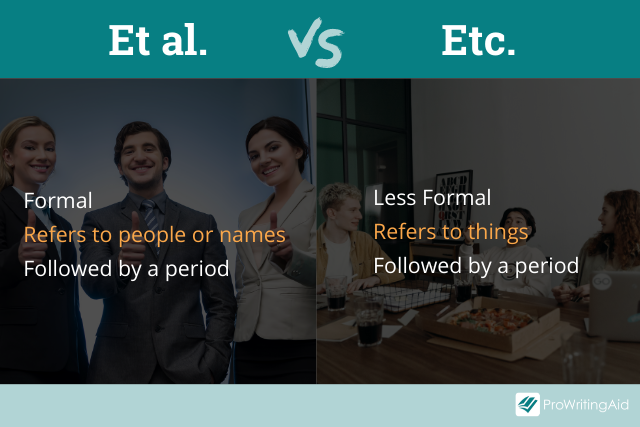 The English language includes a variety of Latin abbreviations, and et al., an abbreviation of et alia, is one of them.

Et al. most frequently means “and others.”  You’ll encounter the term most often in an in-text citation or bibliographic entry of scholarly writings, where it refers to other people or contributors.

However, popular publications also use et al. to avoid including a long list of names of other entities with shared characteristics, such as companies, films, or social media platforms.