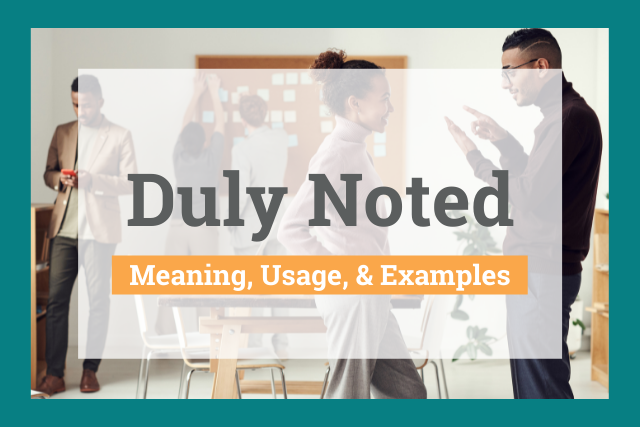 Duly noted is a phrase you might hear or see in a professional context. But what does “duly noted” mean? Is it a rude thing to say?

“Duly noted” is often used to mean “understood” in formal settings. We’re breaking down exactly what “duly noted” means, and when you should and shouldn’t use it.

Duly noted means “acknowledged and given the proper consideration.”

Where Does the Phrase Duly Noted Come From?

To understand what this phrase means, let’s break down the two words.

Due and duly both have several different but closely related meanings. The word “duly” comes from the adjective “due.” “Due” has several definitions, including “"rightful,” “proper,” “fitting,” “adequate,” and “sufficient.” For example, you might hear the phrase in due time, which means in a fitting amount of time, at a sufficient time, or at the proper time. These synonyms help us understand the many definitions of “duly.”

Duly means properly or fittingly. It can also mean “at the right time” or “in an appropriate manner.”

Noted has several meanings, but the relevant one here is “recorded.”

We often use duly noted in official documentation, like meeting minutes.

For example, if someone brings up an objection to a policy, the meeting minutes might say, “the objection was duly noted.” This tells us that everyone present heard and acknowledged the objection. 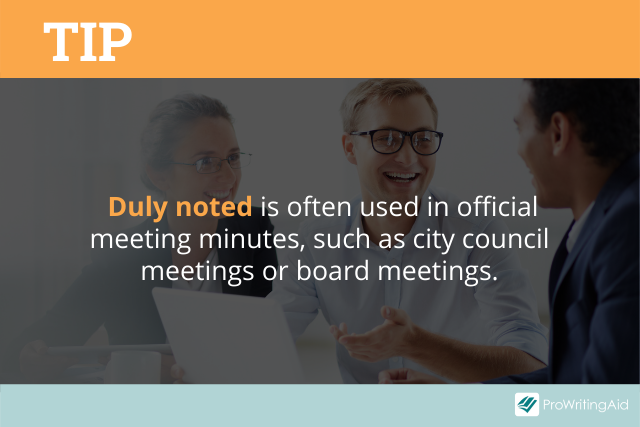 Duly noted implies that an idea, argument, or contribution was given proper consideration and recorded appropriately.

We can use “duly noted” in both written and spoken conversations.

If you tell your boss about an issue your team is encountering, and she replies, “Duly noted,” it means that she heard you and has given the issue proper consideration.

In a professional setting, people use the phrase “duly noted” as a quick way to acknowledge someone’s email. Let’s look at an example.

Hi Kris, I wanted to let you know that the team has some concerns about the workflow you’ve set up. They have a few suggestions to help maximize productivity. Let me know how you want me to handle this.
Thanks!
Beth

To: Beth
Subject: Re: Workflow concerns

Duly noted. I’ve added it to the meeting agenda for Friday.
Best,
Kris

This is an ideal example of how to use duly noted correctly. There’s enough elaboration for Beth to know her boss has heard her concerns. It’s polite and to the point. 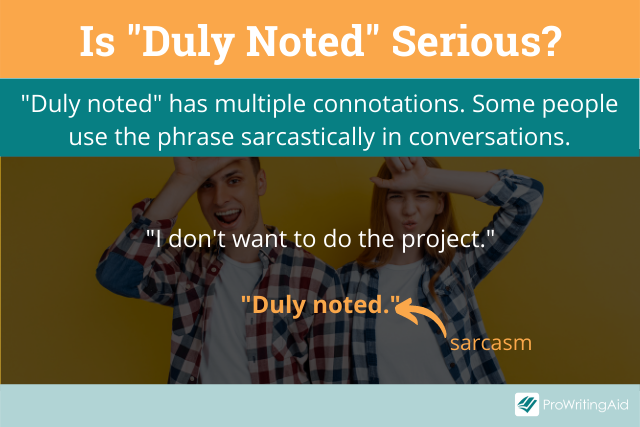 Duly noted can sometimes mean the exact opposite. It’s so formal that people will use it as a sardonic phrase. When someone says duly noted sarcastically, they aren’t considering your request.

The long-running hit show The Simpsons has a great example of this sarcastic usage from Bart’s sardonic teacher, Mrs. Krabappel.

Here’s a scene where Bart, ever the troublemaker, tries to get good grades so he can go to Kamp Krusty:

Bart: Mrs. Krabappel, in figuring out my final grades, I hope you’ll note that all of my textbooks are being returned in excellent condition. In some cases, still in their original wrappings!

Mrs. Krabappel knew that Bart was scheming, but she didn’t care what he was up to. It’s clear that she won’t give another thought to his textbooks or grades.

Duly noted is a succinct phrase, so people often think it sounds rude. Someone can use it to dismiss another person’s ideas or concerns. Sarcastically, it’s a way to say, “your ideas are ignored” or “I don’t care.” 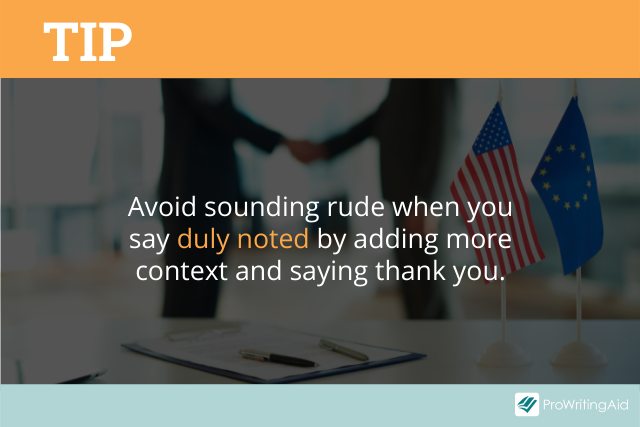 The context matters, as does a person’s tone. When used in a less formal setting, it’s often seen as abrupt, even when the speaker isn’t necessarily being rude.

It’s best to add context in written communication so people can understand the intended tone.

“Duly noted” is a great phrase for official meeting minutes and memorandums, but in emails or chats, there are other ways to say the same thing.

Even adding the phrase to a complete sentence and saying thanks will eliminate some of the rudeness: “Your concerns are duly noted. Thanks!”

Examples of Duly Noted in Sentences

Here are a few examples of how to use duly noted in a sentence: 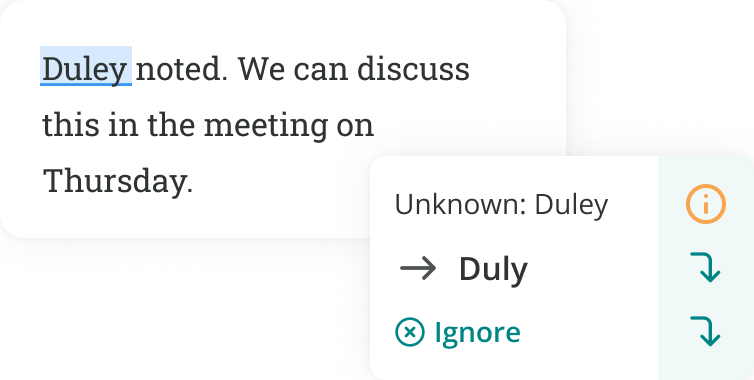 Follow that rule to ensure you don’t misspell “duly.” If you struggle with writing the adverb forms of root words, ProWritingAid can help.

trejo.alec
Thank you so much for the explanation, I wasn´t sure if I should use for my work emails But I did and I think it reads really professional.

kyle.kucera1
Hey there! We're so glad we could help! :)