Dieing vs Dying vs Dyeing: Which Is Correct? 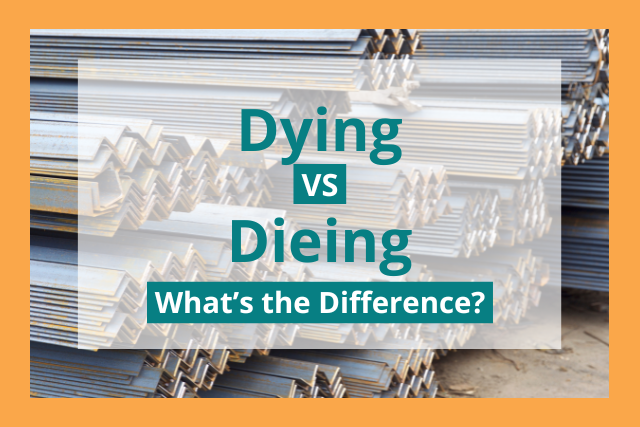 The words dieing, dying, and dyeing are often confused because they’re homophones, which means they’re pronounced the same way. Many writers accidentally use the wrong spelling in their work, which can confuse the reader.

So, how do you know if you’re using the right spelling?

This article will explain the meanings of these three similar words and help you remember which one to use in your own writing.

What’s the Difference Between Dieing, Dying, and Dyeing?

Let’s start with a quick definition of each of these words.

Quick Definition and Meaning of Dieing

Dieing is a rare word that means “cutting or stamping with a die or die-cast.” A die or die-cast is a tool used to shape metals, so dieing refers to the process of shaping metals in a machine shop.

Of the three possible spellings, dieing is the least commonly used. Unless your job involves machining, you might never need to use this word at all. Chances are, you should be using dying or dyeing instead.

Quick Definition and Meaning of Dying

Dying is the present participle of the verb to die, which means “to cease living” or “to be near death.”

For example, you might say the grass on your lawn is dying if it looks very yellow and dry, or that a hospital patient is dying if they’re nearing the end of a terminal illness.

Many people also use dying in a figurative sense rather than a literal one. For example, you might say you’re “dying of laughter,” “dying of hunger,” or “dying of boredom.”

It’s a common mistake to misspell dying as dieing if you simply add an I-N-G after the verb die. To avoid this mistake, remember to switch out the vowels I-E for the vowel Y before you add I-N-G.

Quick Definition and Meaning of Dyeing

Dyeing is the present participle of the verb to dye, which means “to color with a liquid.”

For example, you might say that you’re dyeing your hair, your clothes, your curtains, or even your pillowcases. Just remember to spell dyeing with a Y-E, not dying with only a Y. 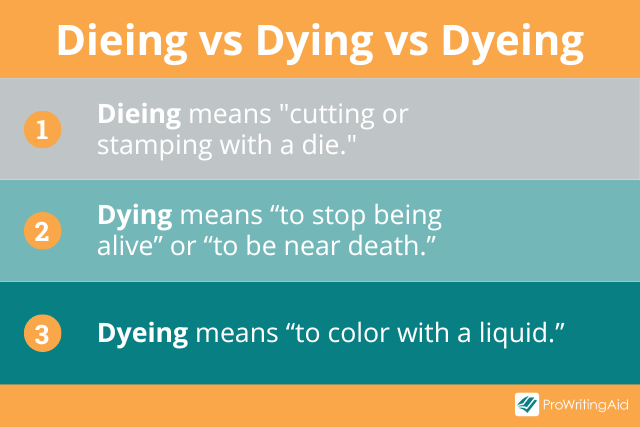 When to Use Dieing, Dying, or Dyeing?

The best way to learn new words is by seeing them in action. Let’s look at some complete sentences that use dieing, dying, and dying.

Examples of Dieing Used in Sentences

Here are some examples of the word dieing in a sentence:

Examples of Dying Used in Sentences

Here are some examples of the word dying in a sentence:

Examples of Dyeing Used in Sentences

Here are some examples of the word dyeing in a sentence:

How to Remember the Difference

If you’re struggling to remember the difference between dieing, dying, and dyeing, you can start by eliminating dieing, since it’s the rarest of the three words.

Most often, you’ll be choosing between dying and dyeing. You just have to remember that the verb dye is conjugated the normal way (simply adding the -ing), whilst the verb die is conjugated in an unusual way (switching out the I-E for a Y). 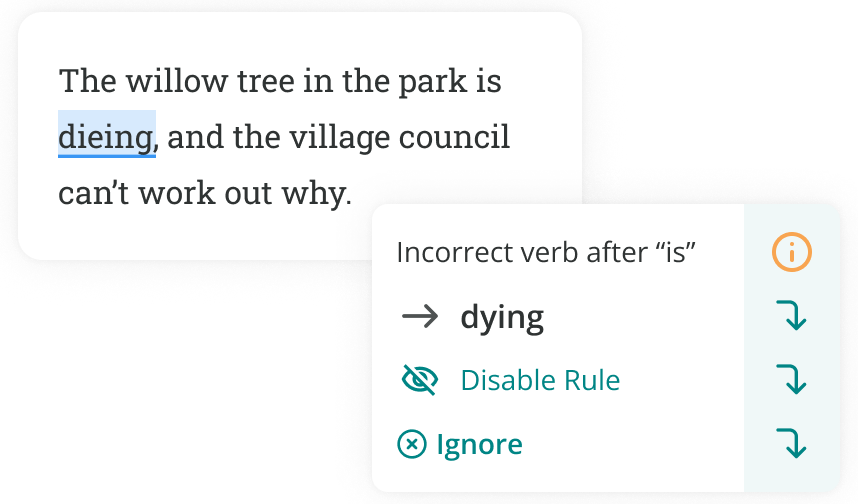 If you’re worried about mixing up homonyms and homophones, don’t forget to run your work through ProWritingAid, which will catch commonly confused words for you!