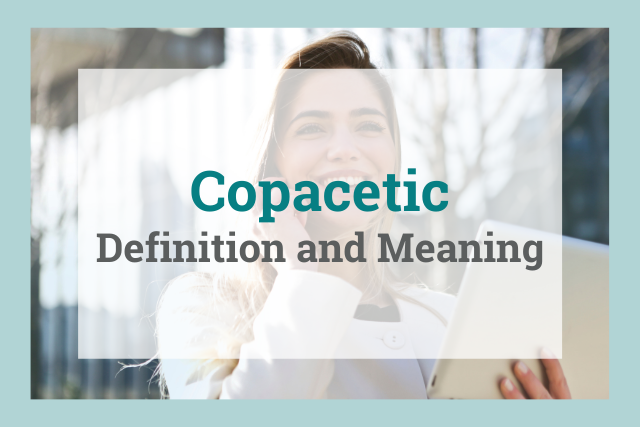 What does copacetic mean?

Put it this way, you would not describe the years 2020 or 2021 as copacetic. They were not fine or satisfactory—not copacetic.

2020 and 2021 were full of virus variants, masks, isolation, and political and social conflict. They were not “okay” years. They weren’t copacetic.

Copacetic is an adjective. It describes nouns or pronouns, and lets readers or listeners know that all is okay with that noun or pronoun. 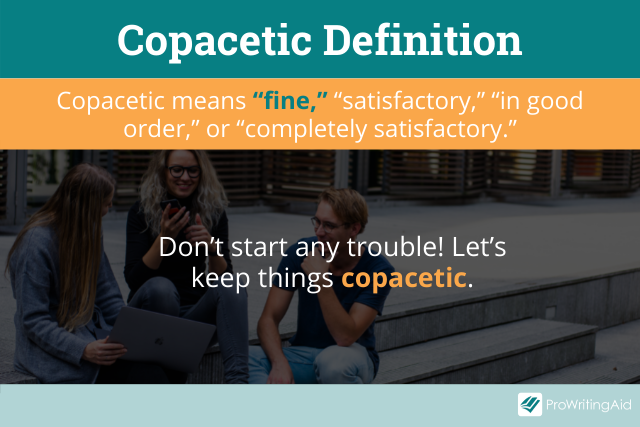 For example, in the sentence John said everything is copacetic., the adjective copacetic is describing the pronoun everything.

How to Use Copacetic

Copacetic is considered an informal term in American and Canadian English. Some even categorize it as slang. Collins English Dictionary categorizes it as “US and Canadian slang,” though Merriam-Webster does not include that label.

Copacetic synonyms include more obvious slang terms such as “hunky dory,” “A-OK,” and “peachy-keen,” but also formal words like “agreeable,” “palatable,” and “all right.” These examples show how copacetic straddles both standard and slang-word territory. 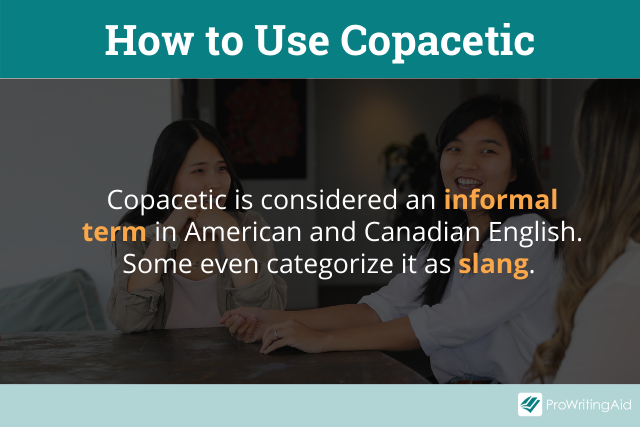 Though it might be more at home in conversations and writing that takes a conversational or informal tone, copacetic is a real word, and has its place in standard English, as shown in the examples below.

You can find evidence for copacetic’s real-word status through its presence in many respected publications.

The New York Times used copacetic as its word of the day in September 2019, noting its use in eight articles that year.

Additionally, sports writer Marc Stein found use for it as did film reviewer Glenn Kenny:

“Meanwhile, all is copacetic in Laker-land: LeBron James and Anthony Davis both agreed to new long-term deals over the off-season.”—Marc Stein, The New York Times, 2020 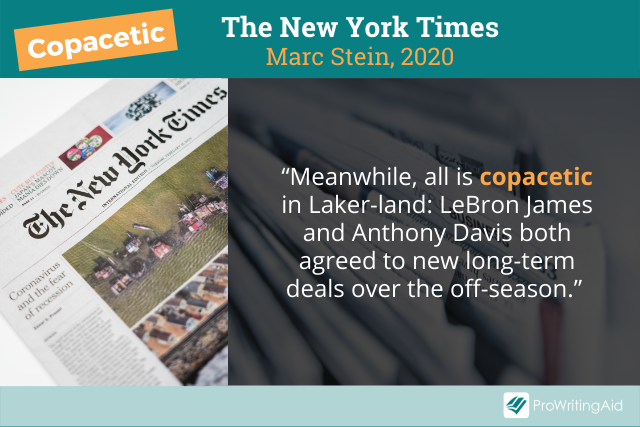 It appeared in a newsletter analyzing President Trump’s response to a 2017 disaster in Puerto Rico:

“The problem is that faced with this trouble, the White House has, rather than acknowledging the challenges and offering comforting words, simply insisted that everything is copacetic”—David Graham, The Atlantic, 2020

Copacetic also found its way into an article on Internet privacy:

“…we all know (at least subconsciously) that our data is being taken, mined, and sold. We’re often copacetic with that with that because we get enough value out of the systems that we don’t mind this cost.”—Neil Sahata, Forbes, 2020

Copacetic is at home in more informal contexts, such as entertainment, and more serious ones, such as political and social commentaries.

Though copacetic may find its way into formal speeches, its presence there is less frequent.

While the meaning of copacetic is clear enough, the word’s origin is more complex. Some believe it originated in Southern African-American Communities in the 1800s while others theorize it started with speakers of Creole, Italian, and Hebrew. As yet, there is no definitive answer.

Merriam Webster claims that copacetic (with many variant spellings) is probably better known for competing theories of its origin than for any other word recorded in American English.

I guess you could say the origin of copacetic isn’t quite copacetic.

What is certain is the first published use of copacetic. This occurred in 1919 in Irving Bacheller’s novel about young Abraham Lincoln titled A Man for the Ages.

In his novel, however, Bacheller spelled the word as “copasetic.”

So what’s the correct spelling?

Copacetic is the most common spelling. If you review the examples of copacetic in publications, they all use this same version.

“Copasetic,” the spelling used in the first printed appearance of the word, is less common than copacetic, but not unpopular. It is a commonly cited alternative spelling.

However, if you conduct a search for “copasetic,” you’ll be directed to dictionary entries for copacetic, with “copasetic” included as an alternative spelling. If you’re writing for a publication, the chances are that an editor will adjust the spelling to copacetic.

“Copesetic” and “copesettic” are less common and regarded more as misspellings than alternate spellings.

ProWritingAid can help ensure you’ve spelled the word properly. The Real time Report will detect your spelling error, and provide the correct alternative.

There’s not much to say about this version of the term, as it doesn’t exist! “Copasthetic” is just a mispronunciation or misspelling of copacetic. The error is popular enough though, that search engines know what you mean and will lead you to copacetic.

A Final Word on Copacetic

Copacetic is a way of describing something as “fine” or “very satisfactory.” Though it has a variety of spellings, copacetic is the one most regard as correct.

If you use copacetic in your writing, the best way to keep things copacetic is to use the spelling copacetic!