Comma Before Including: When and How to Use Correctly 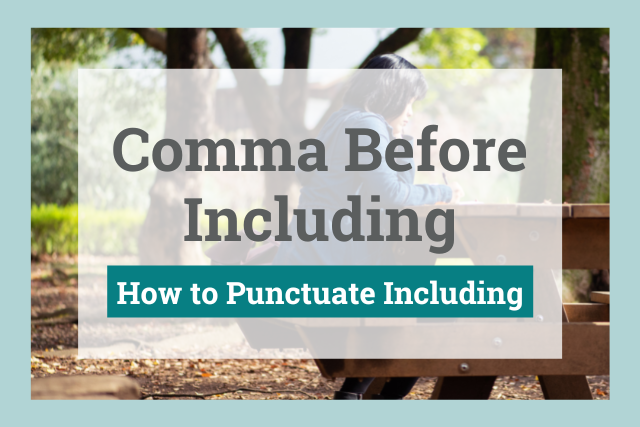 Many people get confused about how to punctuate the word including in a sentence. If you’re wondering what punctuation to use, you’re not alone.

So when do you need to use a comma before a word like including?

You should use a comma before including when you’re adding a nonessential clause or phrase, which doesn't change the basic meaning of the sentence.

If the phrase beginning with including is essential for the meaning of the sentence, you shouldn't use a comma.

In this article, we explain these grammatical rules and give you examples of sentences that do and do not use a comma before the word including.

Should You Put a Comma Before or After Including?

To decide whether or not you need to use a comma before including, imagine what would happen if you were to remove the phrase that begins with including. How much would that change the meaning of the sentence?

If taking out the phrase that begins with including would alter the fundamental meaning of the sentence, you should not use a comma before including.

This is because you don’t want to separate that phrase from the rest of the sentence.

On the other hand, if taking out the phrase wouldn’t fundamentally alter the meaning, you should use a comma before including.

Let’s look at each of these situations in more detail.

You should use a comma before including if you’re using the word including to introduce a non-restrictive clause or phrase.

In other words, you should use a comma if you could remove the phrase that begins with including without completely changing the sentence.

For example, consider the sentence, “My sister loves sugary foods, including ice cream and chocolate.”

You can take out the phrase, “including ice cream and chocolate” without changing the fundamental meaning of the sentence.

The sentence, “My sister loves sugary foods.” can stand alone to express what you’re trying to say. 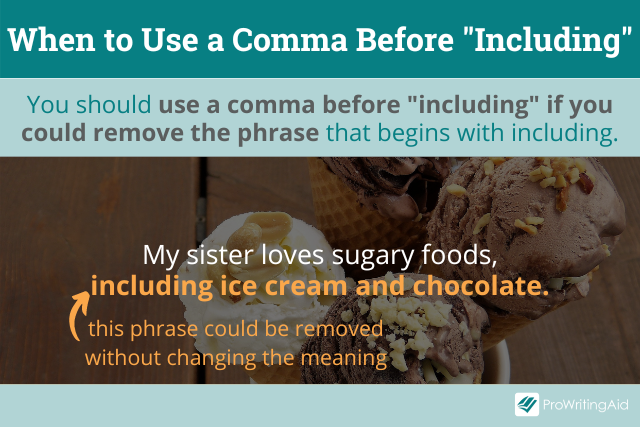 Here are some other examples of cases when you need to use a comma before including:

You should only do this when you’re interrupting the sentence with another word or clause immediately after the word including. 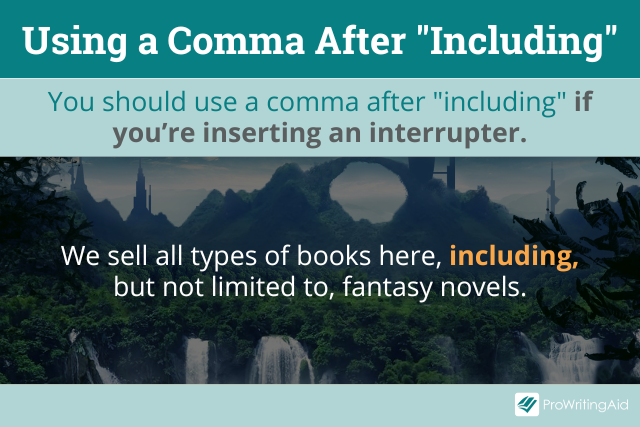 For example, consider the sentence: “We sell all types of books here, including, but not limited to, fantasy novels.”

The purpose of the comma after including is to add a pause before the interrupter “but not limited to.”

Here are some other examples of cases when you might use a comma after including:

If you’re not sure whether to include a comma before or after including, you can run your writing through ProWritingAid, which will highlight incorrect comma usage and help you fix it. 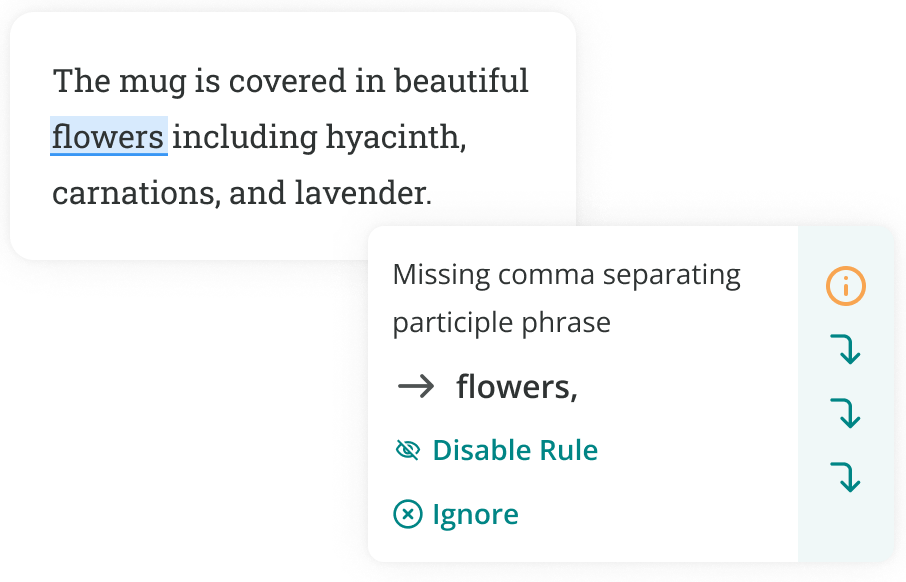 No Comma Before or After Including

On the other hand, you should not use a comma before including if you’re using including to introduce a restrictive phrase or clause.

In other words, you shouldn’t use a comma if removing the phrase that begins with including would fundamentally change the meaning.

For example, consider the sentence, “My sister is including ice cream in her diet.”

In this case, taking out the phrase “including ice cream in her diet” would change the meaning of the sentence because, “My sister is” doesn’t express a complete thought. 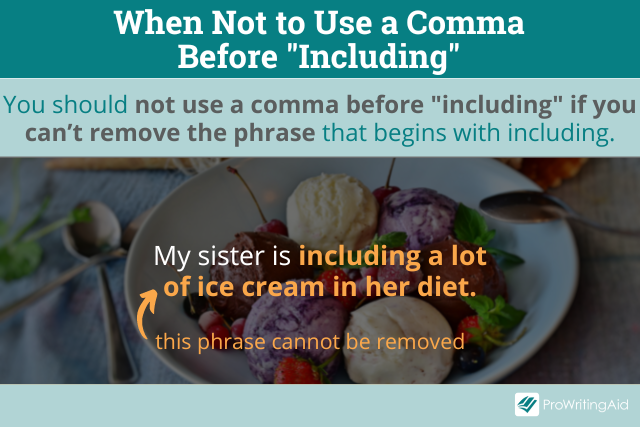 Here are some other examples of cases when you don’t need to use a comma before including:

Should You Put a Semicolon Before Including?

You should never use a semicolon before including. Semicolons should primarily be used to separate items on a list or to separate two complete thoughts.

The word including is rarely used to start a complete thought, so you should use a comma before this word, not a semicolon.

Examples Using Including in a Sentence

Let’s look at some examples from English literature of sentences that use or omit a comma before the word including.

“By including animals in my life I was always engaging with the Other, imagining the animal mind and life.”—Brenda Peterson, Build Me an Ark

“I saw him glance at Amena, who at the moment was an inert pile of limbs under a blanket with a pillow jammed into her face. (Humans do everything weird, including rest.)”—Martha Wells, Network Effect

“Most things break, including hearts. The lessons of life amount not to wisdom, but to scar tissue and callus.”—Wallace Stegner, The Spectator Bird

“As strong as he looked, inside he was a ruin, or perhaps a funeral pyre, like the Cusp—only instead of the melted bones of ijji, he was made up of the skeletons of babies and children, including, as he had always believed, his own child: her.”—Laini Taylor, Strange the Dreamer

“When it comes to actually pulling this off, the writer is much more fortunate than the filmmaker, who is almost always doomed to show too much…including, in nine cases out of ten, the zipper running up the monster’s back.”—Stephen King, On Writing

Conclusion on How to Punctuate Including

There you have it: a complete guide for how to punctuate including. Here’s a quick recap:

ProWritingAid can help improve all types of writing, including yours!