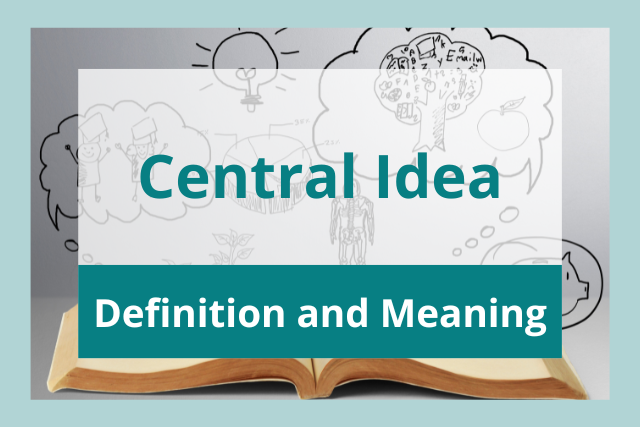 In literature, there are many elements that work together to make a cohesive story. At the heart of each story is the central idea.

The central idea, also called the main idea, is a brief, overall summary of what the entire story is about. Typically, we explain the central idea in one sentence.

The central idea is different from the theme and the message. It’s the backbone of a story’s plot. Let’s take a closer look at what the central idea means in literature. 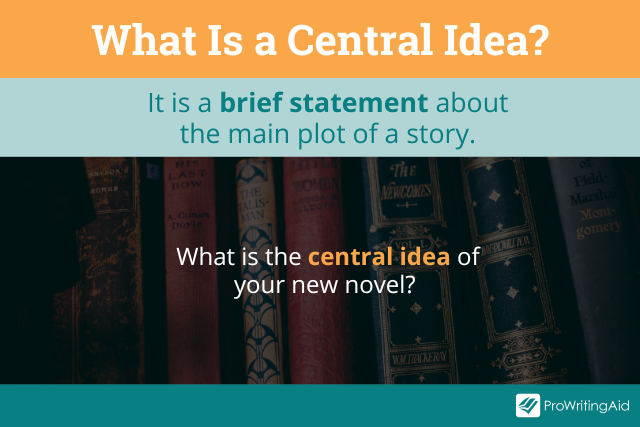 Central Idea Definition: What Is It in a Story?

The definition of the central idea is a statement that explains the main scenario of a story. All plot lines, supporting details, and conflicts support the central idea.

Fairy tales are a great way to understand literary elements. Let’s use Goldilocks and the Three Bears as an example.

The central idea of this story is:

A girl named Goldilocks enters a house in the woods, helps herself to porridge, and breaks furniture, not knowing the house belongs to three bears.

We don’t explore every individual event of the story or even dive into the themes. We briefly summarize the plot and hint that there will be consequences to Goldilocks’ actions. The central idea doesn’t give away “spoilers” by revealing what happens in the story’s climax when the bears come home.

Central Idea Meaning: What Does It Mean?

People often confuse the central idea with a story’s theme. These two literary elements are closely related but distinct.

The central idea addresses the main ideas of the plot. The theme, on the other hand, is the unifying element or elements weaved into a story. A literary theme is a generic truth found in many stories. Themes often have a message for readers from the author.

Examples of literary themes include courage, friendship, revenge, and power.

Central ideas are not generic. They are specific to an individual story.

Let’s return to our example of Goldilocks and the Three Bears. The theme is the effect of selfishness on others. There’s a message or moral there too: Be considerate of other people.

You can see how these differ from the central idea statement, which dealt with the story’s main character and plot. 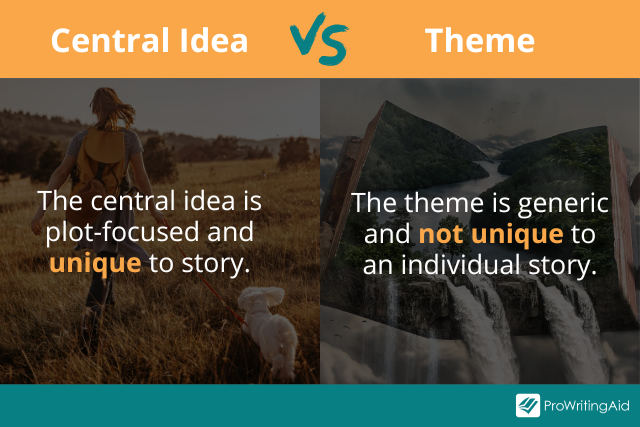 The Importance of a Central Idea in a Story

Imagine writing a story is like building a house. When you have a clear central idea for your story, you have laid the foundation. This foundation supports every other part of the story.

The floors and walls of your story are the external conflict, internal conflict, characters, plot elements, setting, and more. The theme is like the electrical system that runs throughout the entire building.

In the Goldilocks story, the plot events, characters, and theme all relate back to our central idea. Imagine if the theme of Goldilocks and the Three Bears was forbidden love overcoming all. That doesn’t fit the story at all! The fable would sound very strange.

Tips on Using Central Ideas in Your Story

Here are a few tips on the most effective ways to use central ideas in your writing.

The stronger your foundation, the sturdier your house. The same goes with a central idea.

But spend some time honing your central idea. A well-written central idea will explore not just the main plotline but also touch on underlying themes.

A young girl suffers the consequences of her selfish actions after breaking and entering and destroying property in a home owned by three bears.

This central idea still tells us the gist of the story and introduces the main characters, while also touching on the theme of selfishness.

Match the Theme to the Story

Like we discussed above, throwing in a theme about forbidden love to the classic Goldilocks tale won’t fit the story. The themes of a story must be relevant to the central idea.

Most novels or other long-form work have more than one theme expressed in the story. Spend some time figuring out which themes fit your central idea. Then you can plan character arcs, conflicts, or other elements to help you explore that theme.

It’s difficult to sum up an entire story in one or two brief sentences. Start with a big overview then whittle it down to find your central idea.

You can start by writing a synopsis, which is a roughly two-page plot summary. Then try to narrow that down into a paragraph by focusing on the main events and key characters.

Writing a central idea statement from a paragraph is much easier. Keep it short: one or two sentences max.

As an added bonus, you can then use your central idea as your elevator pitch to quickly introduce people to your book. 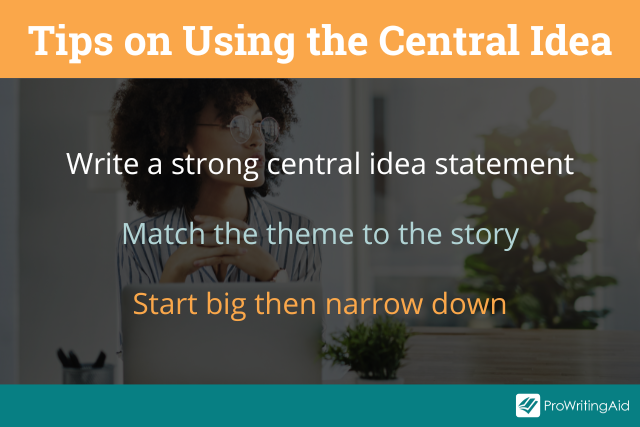 Examples of the Central Idea of a Story

Your book is likely more complicated than a fairy tale. Let’s look at some examples of central ideas in other works.

Romeo and Juliet by William Shakespeare

Two young, star-crossed lovers cause a deadly war between opposing families when they hastily marry.

In the 1920s, Jay Gatsby has achieved great wealth through unsavory means in an attempt to impress the love of his life, Daisy Buchanan. Regardless, they are still divided by their differences in social status, rampant materialism, and Daisy’s abusive husband.

A Christmas Carol by Charles Dickens

A lonely miser named Ebenezer Scrooge is haunted by the spirits of Christmas Past, Present, and Future to confront his life choices and learn about love and compassion.

Conclusion on Central Ideas in a Story

Finding the central idea of a story will help you understand how the plot and themes work together. Discovering your own story’s central idea will guide your writing process and help you develop a cohesive story.