Cancelled vs Canceled: Which Is Correct?

Unless it’s a work conference or dental appointment, the last thing any of us wants to see when we turn up somewhere, is a large sign saying, Event Cancelled.

And yet, in the era of the global pandemic, it is something we have all grown used to seeing.

Thanks to COVID-19, there have been announcements such as: 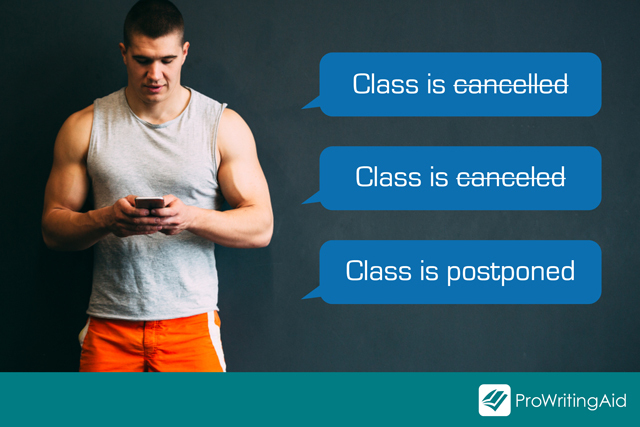 In Florida, the US PGA Golf tournament was canceled and over in London, Wimbledon was cancelled too.

Similarly, the launch of the latest James Bond movie was postponed and then cancelled in 2021 whilst guess what happened to the much-anticipated launch of the Top Gun sequel in early 2021? It was canceled!

In case you haven’t noticed, there are two different ways of spelling cancelled / canceled and both are grammatically correct.

How is this possible? Does one version have a different meaning to the other? Or does the spelling depend on the intended function in the sentence?

Thankfully, the answer is a lot less complex. The correct spelling will depend on where you consider your home to be.

Canceled or Cancelled: What’s the Difference?

Both spellings—canceled and cancelled—are the past tense of the verb to cancel and are used whenever something has been annulled, invalidated, or not taking place.

Here are a few further examples:

The rule for the different spellings is very simple. Canceled and cancelled are both spelled correctly, but the difference is purely regional.

If you come from America and use American English, then you should use the single L spelling and write canceled.

On the other hand, if you come from the UK and use British English then you would use the LL spelling and write cancelled.

Hopefully that helps explain the rule. Now let’s take a closer look at each version. 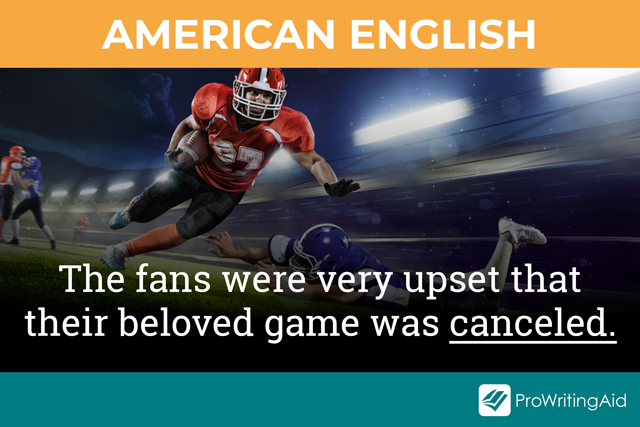 When writing for an American audience, the preferred choice will be to use canceled with a single L.

From then on, canceled gradually took over and became the preferred spelling in the AP Stylebook (and all of the other US stylebooks.)

Let’s look at some examples from American newspapers and news media: 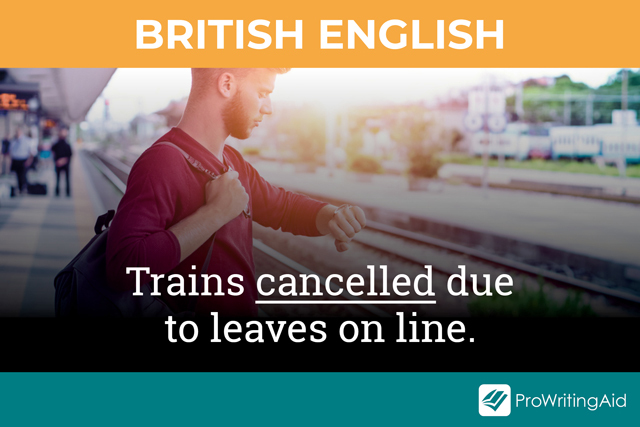 When writing for a British audience the preferred choice would be to use cancelled with LL.

Whilst the L spelling is not grammatically incorrect, the LL spelling has been the overwhelmingly dominant form of usage in the UK for centuries and it’s unlikely to change any time soon.

All the newspapers and stylebooks recommend the LL spelling, as we will see below:

What about the Canadian spelling? Because Americans use the American English spelling of canceled, a lot of people assume that Canadians will do likewise. That’s not the case.

Although Canada is part of North America, the country is a member of the British Commonwealth and the people of Canada write and speak British English rather than American English.

Consequently, they use the LL spelling for cancelled in Canada.

Is it Canceled or Cancelled in Other Countries?

The same LL spelling is used in most countries across the world, apart from the US. Any English-speaking country that is, or was, a part of the Commonwealth—such as Australia, New Zealand, or (formerly) Ireland—will use the British English version and refer to cancelled or cancelling.

Canceled and Cancelled: A Brief History

At what point did the US spelling diverge from the UK? No one can pinpoint the exact moment, because for hundreds of years there was little standardization in the English language.

British English spellings can be traced all the way back to Johnson’s dictionary and in the US, Webster’s Dictionary was equally influential.

However, in that first edition of Webster’s dictionary in 1806, cancelled appears under the original LL spelling.

It was not until 1828 and the first edition of Webster’s An American Dictionary of the English Language that the single L spelling canceled appeared in the dictionary.

The reason for this is uncertain, though most historians believe it was the influence of Noah Webster himself.

Webster was a passionate advocate for the simplification of spellings and particularly of words with the unstressed LLs.

Webster thought that many British English spellings were too complex and that they would work just fine without the extra letters.

He therefore set about the process of shortening / simplifying several such words, including: 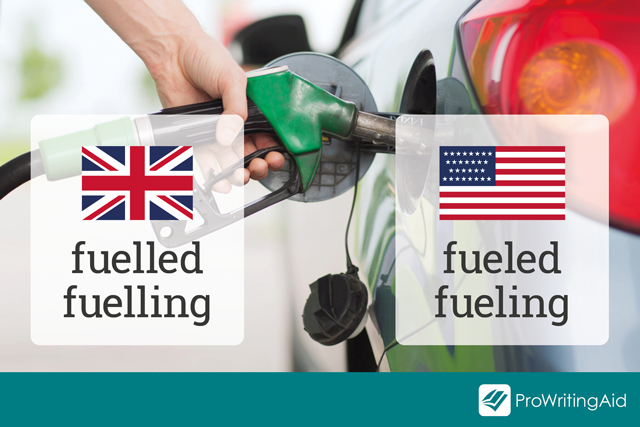 Other L and LL Words

Consequently, in addition to canceled / cancelled, there are plenty of other words that follow the same division between British and American English.

Whereas in British English most words ending in L will double to LL, American English prefers the single L.

There are inevitably exceptions. Rebel is one such example in which the British English and the American English follow the same LL form —rebelled, rebelling. Similarly, compel also uses LL—compelled, compelling.

If you ever find yourself confused, you can always run your writing through our ProWritingAid Realtime Report.

You can set it up to write in American English or British English to ensure you get the right spelling, and you can run the consistency checker to make sure you are consistent in your spellings. 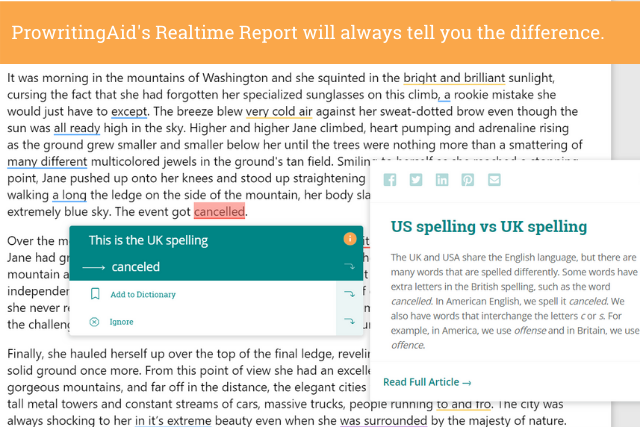 As with the exceptions mentioned above, canceled / cancelled also has an exception to keep in mind.

Regardless of the country you are in or the audience you are writing for, both American English and British English spell cancellation with the LL spelling: 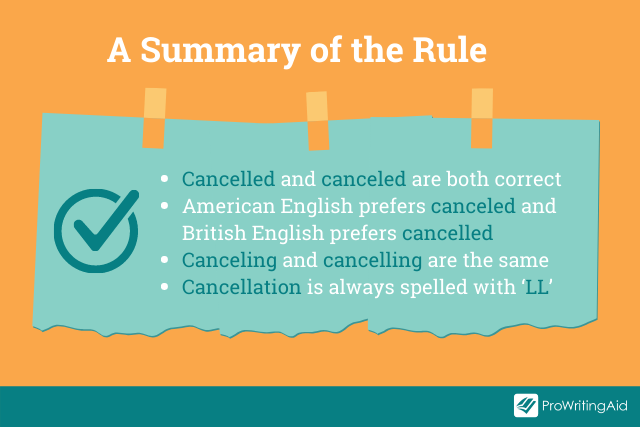 So, there it is. If you’re an American or writing for an American audience, the single L spelling of canceled is the one to opt for. And if you’re back in old Blighty you’ll stick to the LL.

If you’re struggling to remember which is which, don’t forget that the ProwritingAid Realtime Report will always be there to tell you the difference. Sign up for a free trial today to get started.

Alternatively, there is a simple rule. If you’re trying to recall which spelling belongs to which country, just remember that American English always opts for the shorter, simpler version.

But don’t worry too much—both spellings are fine. No need to worry about being canceled!

gayphilips
Thank you!!! This has confused me for a number of years. Although I'm American, I always believed the British spellings were correct.

millie.dinsdale
I totally agree with you! It's so difficult to tell if a spelling is incorrect or from British, Canadian, American or Australian English.