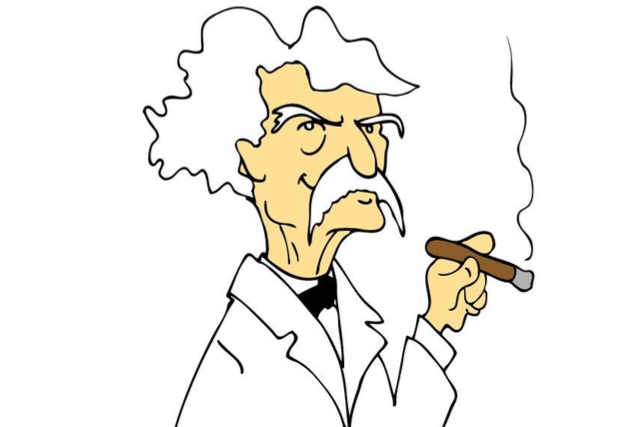 Writers who use satire to get their point across do so by wielding humor, wit, irony, or sarcasm. They expose an individual or society for its weaknesses, corruption, hypocrisy, or foolishness. And no one does it better than Mark Twain.

The Innocents Abroad is a non-fiction story about Mark Twain traveling to Europe and the Holy Land. He pokes fun at how countries package and sell their history for others' consumption. He also points out the contrast between his actual, sometimes boring trip and the overly inflated, amazing descriptions in travel writing at that time.

Twain's most famous use of satire is the incomparable The Adventures of Huckleberry Finn. Told from a young boy's perspective, it makes a mockery of the adults in his life and points out their hypocrisies. For example, Huck can't figure out why he will go to hell for helping Jim escape slavery. He thinks it must be because of his lack of education or something.

How to write satire

The British do satire very well. It's subtle and wickedly funny. The Americans tend to do it poorly: very in-your-face, loud and obnoxious (I'm American so I can say that!). Here are a few of the golden rules about writing satire to help you write this most sophisticated form of humor.

If you're writing a novel for feisty senior-aged women (think Golden Girls), you wouldn't use college humor. And the differences don't have to be that stark. You may need to focus your satire differently if you're writing to married couples or single people. If you want your satire to hit the right chord, make sure you target your material to the right crowd.

You know when you've pushed the envelope too far. It's when the FBI or the MI5 breaks down your door. Or when you deeply offend a group of people who hold something or someone sacred. Just don't go there. You may think it's funny, but it's deliberately disturbing to others. Not worth the few laughs you might get from the cavemen still out there.

3. Don't be afraid to be irreverent

The other side of the fine line that limits good taste is irreverence. Irreverence is funny when done well. So, don't be afraid to poke fun at the mistakes the Pope makes or the many bumbles of politicians. You may offend some people, but you're not writing for those in the middle of the road who are trying to play it safe anyway.

Did you ever read the book Primary Colors: A Novel of Politics written by Anonymous? Fantastic, thinly veiled satire of Bill Clinton's presidential run. The author exaggerated Clinton perfectly where it counted most: the fictional politician Jack Stanton talks too much, eats too much, and flirts with women too much.

There's no reason to be a jerk and be mean. Making fun of someone or something is what middle school bullies do. You want to be thoughtfully funny and clever with your observations. In fact, satire is perfect for bringing up new ideas and using humor to make them accessible and acceptable.

6. Don't expect to get rich

While Mark Twain did satire very well, there is no market for satirical writing--unless, of course, you write for Saturday Night Live. But the true reward is it's fun. Some people take themselves too seriously. Have a little fun and pop their pompous balloons to bring them back down to earth. Think of Jim and Tammy Faye Bakker as characters in your next novel.

Satire is really hard to write. You have a tendency to over-explain so everyone gets the joke. But, have faith in your readers, cut out most of the explanation, and give them a few subtleties. Those who get it will laugh hysterically. Those who don't will just think you're quirky.

Finally, leave your reader asking some tough questions. Make him or her struggle with important issues long after reading your piece.

Hey, have you ever written satire? Let us know in the comments below what you wrote and how it was received.

sirtomfool
I have finished and published my satirical book, " 'Will I See My Grandmother Naked in Heaven?' (http://www.amazon.com/dp/1722973013) Where I need help is in promoting the book. I cannot tell if your services include promotion. If they do, I am interested.