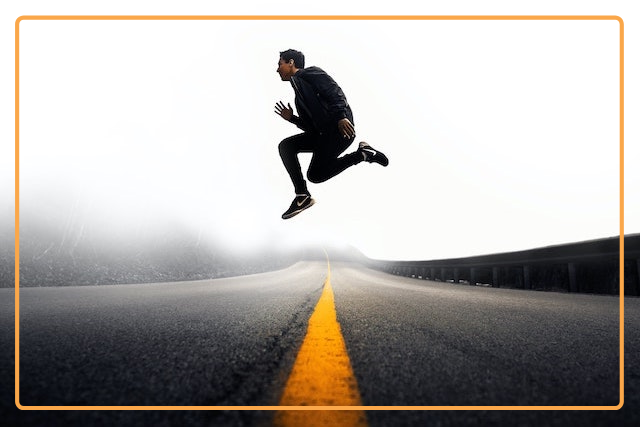 Take a gander at the above picture. What can you infer about the man in this photo? Go ahead, take your time.

I think this character is a fun-loving guy. Seems like he’s outdoorsy, in good shape, probably a runner, maybe even a former (or current) track and field star. I’m guessing he’s also a risk-taker, since he’s posing for a photo on what looks like a rural highway with intense fog cover. Finally, this image would make for a trendy profile pic, so I’m guessing our guy is active on Facebook, Instagram, or both.

This is what character development is all about. We writers must draw our readers’ attention to the right details at the right time—and that’s only the beginning! For more on building great characters, keep reading.

Voice is more than just dialogue. Dialogue is the method by which characters most often express their voice, but the term encompasses far more. Voice is a character’s world view, their word choice, their eloquence (or lack thereof), their regional dialect, and more.

Let’s look at a line from one of my favorite books ever: Jennifer Egan’s A Visit from the Goon Squad.

Sasha speaks only seven words here, yet we can almost hear her saying them. Through dialogue, we see that Sasha is not being honest with herself: nobody’s "always happy," as she puts it, and it seems unlikely that one would forget the feeling. Indeed, from the voice established in these two sentences, we get her world view. Sasha isn’t entirely honest with herself about her own feelings.

When developing voice, I find it helps to have a specific person in mind. Maybe this is someone you’ve known all your life; maybe it’s someone in line in front of you at the grocery store. Whatever you choose, try mimicking their tone, word choice, and speech patterns in a character. I guarantee it will add zest to your writing. 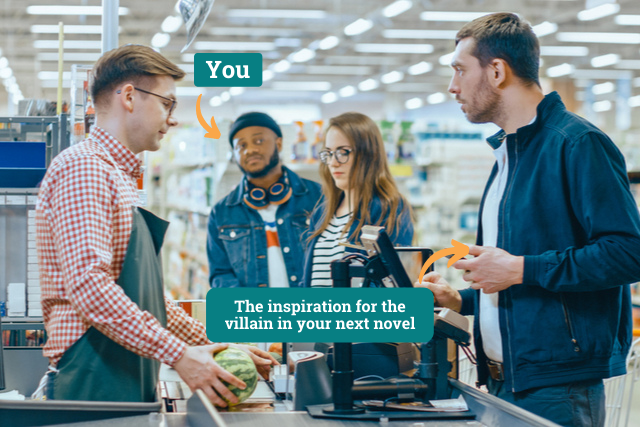 Also, remember that character voice can manifest in narration as well. This is most obvious in first-person narratives, which are by definition told in a single character’s point of view (J.D. Salinger’s The Catcher in the Rye is a classic example of a vivid first-person voice). But don’t forget third-person limited narratives as well, such as George R.R. Martin’s A Song of Ice and Fire.

Each chapter in Martin’s series is told from the point-of-view of 31 rotating characters (yes, even the author has agreed that’s probably too many). The voice of the narration in each chapter matches the voice of the point-of-view character the chapter’s about. Take Sansa Stark, for instance. She’s an idealistic and oftentimes naïve young girl who wants to be a woman, but is still a child in many ways. Therefore, her chapters feature some intentional word choices. When she refers to her stomach, for example, the narrative voice opts for the word "tummy," which is of course most commonly used by kids.

Always keep voice in mind, especially in dialogue and occasionally in narration, if your story calls for it.

Unless you’re writing about a newborn or an artificially created lab monster, every character has a backstory. Delving into that backstory is essential.

Take Harry Potter. From the very first chapter of the very first book, the reader knows much of Harry’s backstory. He’s a special child, he’s connected to the wizarding world, and his parents were murdered by Lord Voldemort. All that backstory makes him a compelling character—and in that first chapter, he’s only a baby!

Devising backstory for our own characters can work in a couple of ways. I like to call this starting with the chicken or the egg. The chicken means that we’ve already created our present character, so we devise a backstory that explains how they became the person they are. The egg approach is the opposite: we start with someone’s past and examine what sort of character that past would create.

Both approaches are acceptable, and you might alternate depending on the character. Use whatever comes naturally. Details to examine in your characters’ backstory can include family, upbringing, economic status, religious affiliations (or lack thereof), cultural identity, sexual identity, job history, happy memories, traumatic memories, and milestones. That’s by no means an exhaustive list, but hopefully it’ll get you started.

How to show that backstory? The flashback is the most direct method, though it can slow your story if overused or placed in the wrong spot. As in the Harry Potter series, you could begin with a prologue. Just be aware that prologues need to be especially compelling, otherwise a first-time reader might not continue. Backstory can also be expressed through dialogue, direct narration, or even dream sequences.

ProWritingAid’s Pacing Report can help you work out if you’ve spent too long on introspection or backstory. 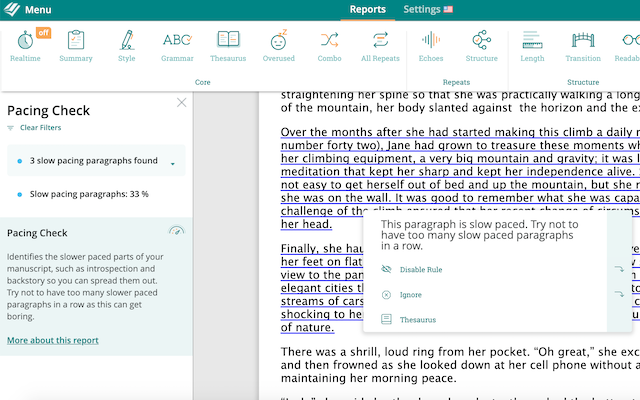 You’ll see straight away where you need to add in dialogue or action beats to keep your reader engaged.

In my experience, this is one of the trickiest parts of characterization. Sure, it’s easy enough to describe what someone looks like. The key is focusing on not just any detail, but the important ones.

"Below the waterbag were [Roland’s] guns, carefully weighted to his hands; a plate had been added to each when they had come to him from his father, who had been lighter and not so tall...The holsters were oiled too deeply for even this Philistine sun to crack. The stocks of the guns were sandalwood, yellow and finely grained. Rawhide tie-downs held the holsters loosely to his thighs, and they swung a bit with his step; they had rubbed away the bluing of his jeans (and thinned the cloth) in a pair of arcs that looked almost like smiles."

Perhaps the coolest thing about this physical description is that it never mentions predictable details like hair or eye color. Here the author draws our attention to Roland’s guns, his holsters, the tie-downs, and his jeans. Yet his equipment tells us tons about him.

For starters, his guns are clearly important to him (makes sense for a guy called "The Gunslinger"). He wears them frequently enough that they’ve rubbed the color off his jeans. We’ve also learned that these guns are a family heirloom, that Roland uses them often, and that he’s pretty tall (since he’s taller than his father was).

When writing physical description, always be direct and intentional. Select details that not only paint the picture of the character, but also inform the reader of pertinent facts.

There are many more aspects of characterization that deserve examination. However, for the purposes of this article, I wanted to go in-depth on three that I think are especially impactful—and in some cases, misunderstood. I hope these tips help! 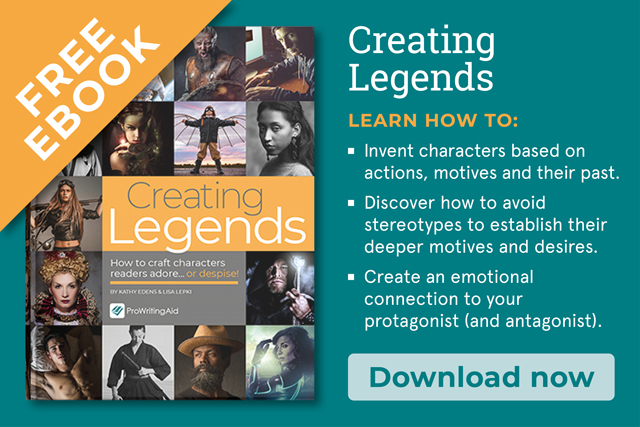