Affective vs Effective: What's the Difference? 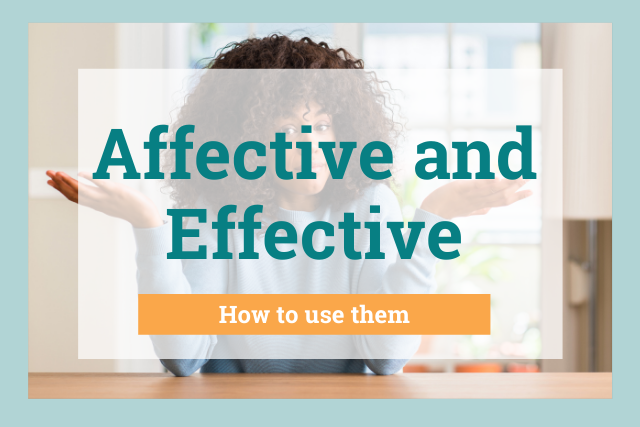 What Does Affective Mean?

Affective is an adjective defined by Merriam-Webster as “relating to, arising from, or influencing feelings or emotions.” A simplified version of the definition is simply “emotional.” Affective is pronounced with the “a” as in apple sound or the “uh” as in umbrella sound.

So for affective, think psychology: feelings, emotions, and moods. 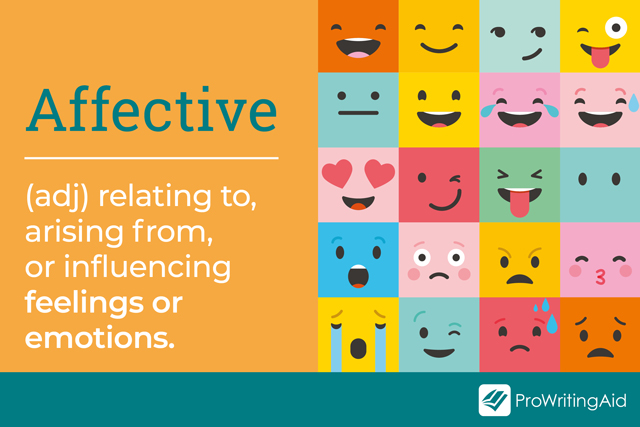 What Does Effective Mean?

Effective is also an adjective. It’s defined by Meriam-Webster as “producing a decided, decisive, or desired effect” (result). It has other less common meanings we will review later. Effective is pronounced with the “e” as in eat sound or the “ih” as in information sound.

So, for effective, think results. 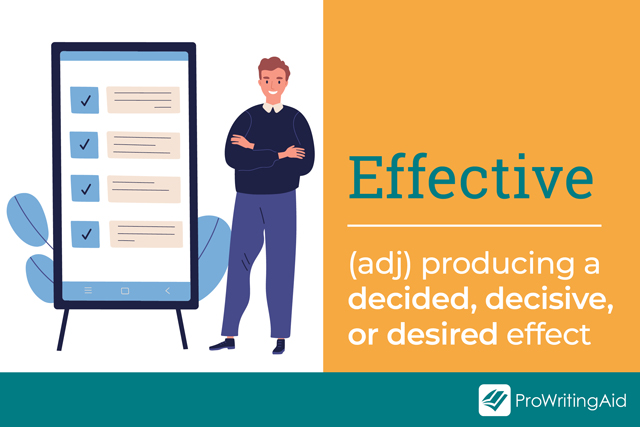 How to Use Affective

Affective is used in discussions about feelings, emotions, and mood, as well as in psychological contexts; most specifically to describe psychiatric disorders. Affective disorders affect the way a person thinks and feels.

Did you notice the use of the verb “affect” in the prior sentence? As with many words in the English language, affect can be used in different ways. However, only one of those ways relates to the use of affective (the adjective). I’ll explain.

Affect Can be Used as a Noun or a Verb.

In its noun form, affect refers to an expressed or observed emotional response. For example, a person in a state of shock might seem to have no affect—they just wear a blank expression. A person who has just won a brand new car will have a positive affect—full of bright-eyed smiles. A person who is depressed may have a “flat” or less responsive affect.

In its verb form, (to) affect means to influence or bring about change. For example, including more fruits and vegetables in your diet will affect your health in positive ways. Kind words can affect a person’s day, turning it from bad to good. An impending rainstorm might affect your beach plans.

Based on those examples, does the adjective affective relate to the noun or verb form of affect?

Affect, the noun, is the correct answer! Affect in its noun form and affective, the adjective, both refer to feelings, emotions, and moods.

Remember that affective has a specific use and narrow context. It belongs in discussions of psychology, emotions, moods, and feelings. Take a look at these examples and you’ll recognize that context. 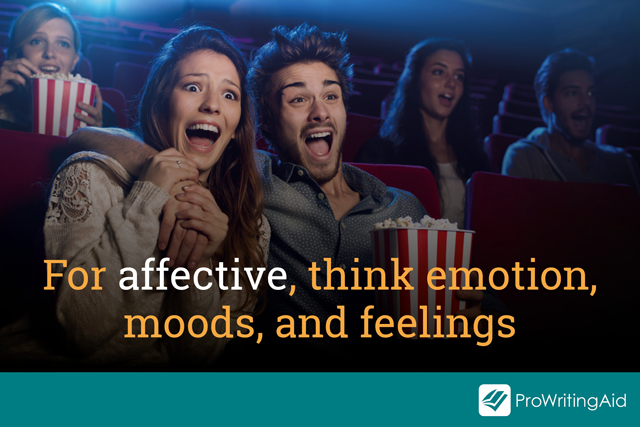 How to Use Effective

Effective is used in more varied contexts than affective. Simply stated, if you aren’t writing about psychology, feelings, emotions, or moods, effective is most likely the correct choice. Knowing the difference between affective and effective will help you effect the most accuracy in your sentence.

I did it again—did you notice how I used “effect” as a verb in the prior sentence? Like affect, effect takes different forms, but one of those forms is more closely related to the adjective effective.

In its noun form, effect refers to a result. Think cause and effect. The effect of the rain was that the picnic was canceled. The effect of eating fruits and vegetables is a healthier body.

In its verb form, (to) effect means to bring something about or to cause change.

Of those two forms, effective, the adjective relates more closely to the noun “effect” as both address the idea of results. Keep in mind, though, that an effect can be either good or bad, but when something is described as effective, that description is always positive. Other Uses of Effective

There are other ways to use effective.

You’re probably familiar with the use of effective in examples like these:

In these examples effective means “operative” or “being in effect.” The phrase effective immediately basically means “starting now!” 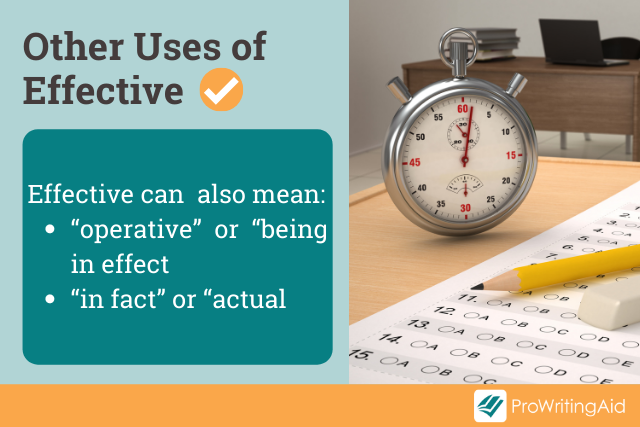 A less common use of effective in its adjective form occurs in these examples, where the word means “in fact” or “actual.”

Much less common is the noun-form of effective, which refers to a soldier who is ready for service.

Affective and Effective: Contexts to Consider 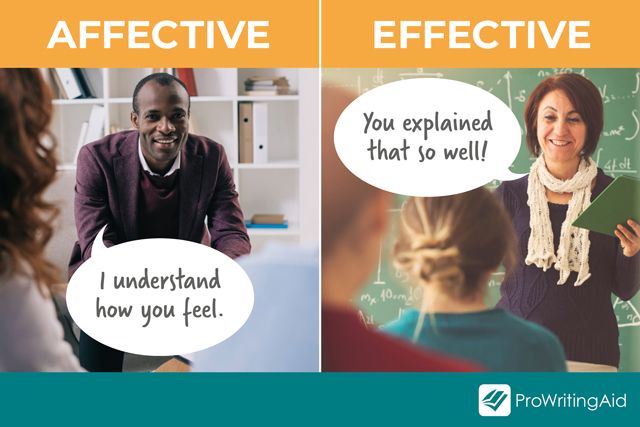 There are a few contexts in which you may need to think a little more carefully about using affective and effective.

For example, communication can be described as affective and/or effective. So which should you use? It all comes down to what you mean.

Affective communication refers to how a person conveys and responds to feelings and emotions. Strong affective communication skills can help you in your personal and professional lives. It means you’re responsive to the emotional needs and cues of others and can express your emotions appropriately.

If you simply want to indicate that someone got a point across well or kept an audience engaged or made something complicated seem simple, then that person would be showing effective communication skills. They got their message across successfully.

In terms of education, teachers may be described as “effective” teachers. They are successful in facilitating learning among students. However, teachers can also be “affective” teachers, meaning they recognize the role of emotions in learning and create an environment of learning around that relationship.

An Affective vs Effective Challenge

Here’s my attempt at using affective and effective, um effectively, in one paragraph. Check me for accuracy and then try one yourself! You can run it through ProWritingAid to check your work.

My friend noticed he would get really sad and experience energy loss as fall began, so he went to the doctor. The doctor said the change in his mood and overall affect was likely caused by seasonal affective disorder. She recommended a light box as an effective part of therapy and suggested my friend begin sitting or working by the light box for 20-30 minutes per day, effective immediately. Thankfully, the doctor was right! My friend noticed the symptoms of his affective disorder decreasing and his mood improving. The light box was an effective remedy for my friend.

This might be a lot to remember but not to worry, the ProWritingAid tool is always there to help you if you forget. Our Realtime Report can almost always tell when you’ve used the wrong word and our built-in dictionary is there as extra help. 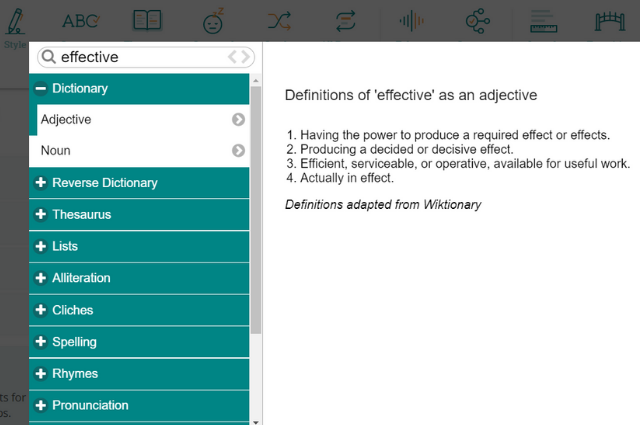 meshaun
Thank you for the article.