ProWritingAid
ProWritingAid
Blog Grammar Rules Former vs Latter—What Is The Difference And When Do You Use Them?

Former vs Latter—What Is The Difference And When Do You Use Them? 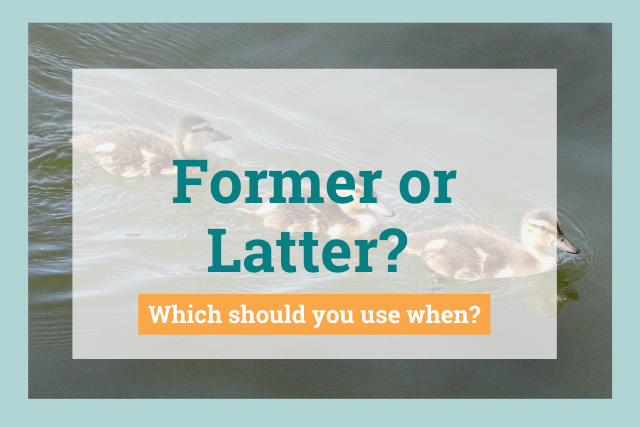 What Type of Words are Former and Latter?

Former and latter are referential words, used as adjectives to describe a noun that comes before them. That means they refer to something else—a person, place, or thing mentioned before.

To distinguish between latter and former, you need to understand what the reference is. The reference is usually a comparison of two items in the preceding sentence or paragraph.

Here’s an example of a sentence as a base for using former and latter:

Steve’s tasks for the day were leading the weekly team meeting and exercising the dog on a long walk. 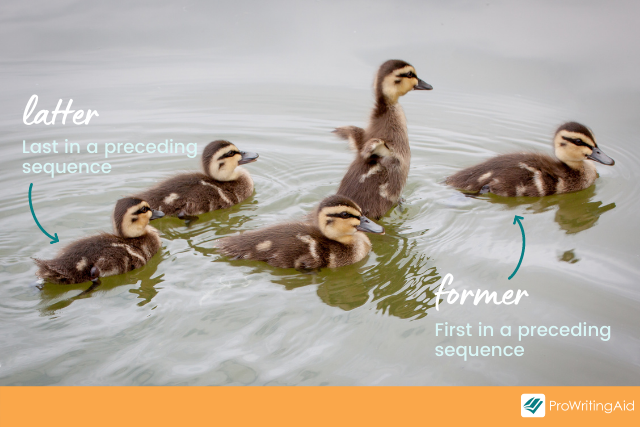 When to Use Former and Latter

Because former and latter refer to a preceding sentence, it’s unusual to find them in everyday speech, a casual blog article, or a social media post.

A listener in conversation may have a hard time remembering the order of items they just heard. A blog reader might think your wording sounds stilted. And someone scrolling through social media posts may not have enough information to understand the reference.

But, former and latter are used in formal and technical writing to help readers understand the focus of the current sentence.

Use of both former and latter has declined in usage in both British and American English as writers increasingly discover that direct reference creates clarity in books, journals, and magazines.

In order to use the words former and latter correctly, you'll need to understand their conventional uses and limitations. Let's take a look.

How to Use Former

Former is an adjective that uses three rationales. Each use refers to something previous.

Use #1: Using Former After a Sequence

In the first type, former refers to the first of two items mentioned in a sequence.

Here are some examples of using former following a sequence: 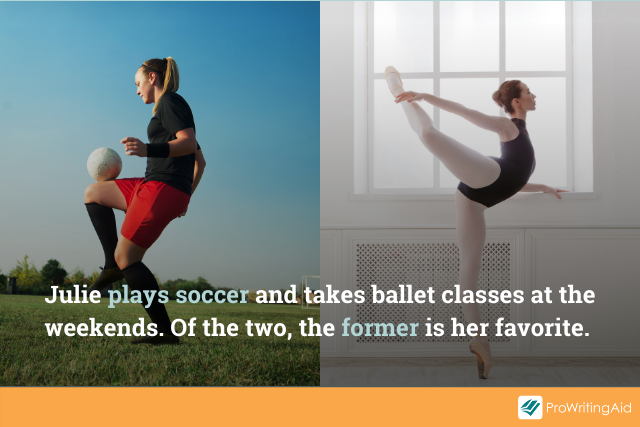 PRO TIP: Do not use former with a sequence of three or more ideas. In that case, rephrase the statement for clarity.

Use #2: Using Former to Refer to Something Past

Former also refers to something that happened in a previous place or time.

Examples of using former to refer to previous occurrences:

Use #3: Former to Show a Previous Condition

Finally, former can indicate a previous position or state that no longer exists.

Check out these examples of using former to show a previous condition:

Included in this use is a common idiomatic expression: former self.

Throughout all of these examples, the basic guideline for using former is to refer to something that occurred before. It can be the first in a sequence, a previous occurrence, or an earlier position or state.

How to Use Latter

Latter is an adjective with two common uses. You’ll refer to a person, place, or thing that comes at the end.

Use #1: The Latter Item in a Sequence

Use latter to refer to the last of two items in a sequence.

Here are some examples of using latter to refer to the last item in a sequence. 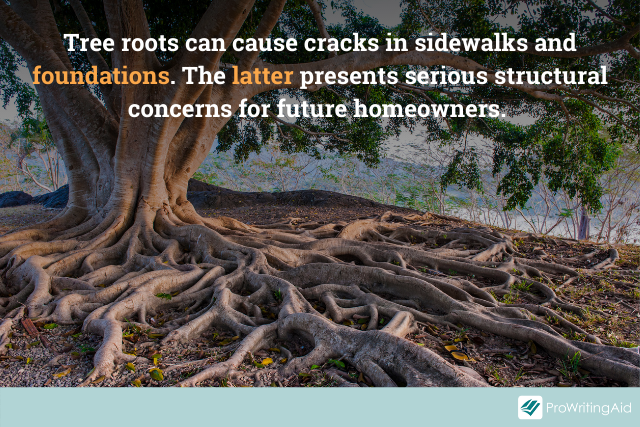 Because latter refers to the last item in a sequence, you can use it in lists longer than two items.

Example of latter with a list longer than two items:

Examples of latter as a synonym:

Remember that latter refers to the last or final person, place, or thing.

Ways to Modernize Your Reference Language

When you use former or latter, you require your reader to stop reading—never a good thing—and go back to reread the preceding sentence.

You can modernize your language with explicit references. Clarity helps your reader understand your point immediately.

Here’s an example with former: 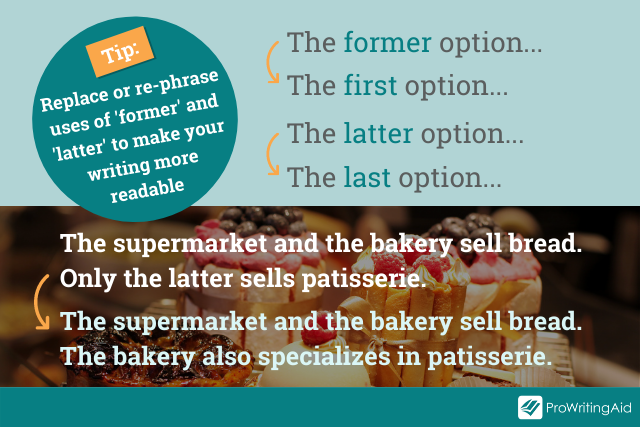 Here’s an example with latter:

And here's how to modernize your reference language when you use both latter and former:

Just don’t do it. You make your reader work too hard to understand your message. First, your readability score will be high, and, second, your reader needs to go back to reread the entire previous sentence.

Especially when you are presenting complex concepts, clarity works in your favor. You make it easier for your reader to understand the logic of your argument.

In business writing, coming across as a person who is easy to understand and relatable is an advantage. 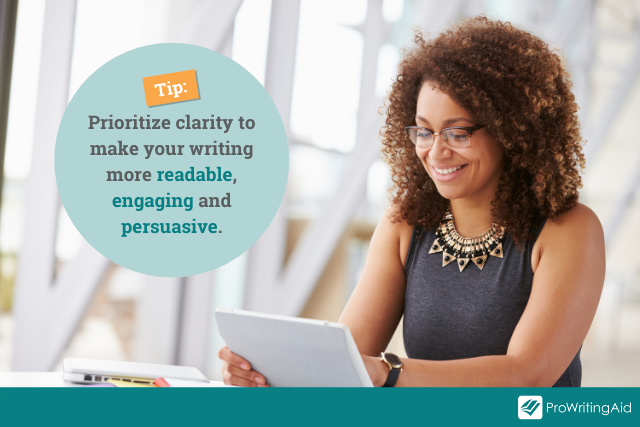 Rephrasing your sentence to eliminate using former or latter and instead clearly stating the noun enhances reader understanding. You improve readability to help your reader comprehend your exact meaning. And your language won’t sound formal and outdated.

Using these terms correctly means you understand the grammar rules. But good grammar isn’t the only test for how your reader comprehends your text. Your job as a writer is to connect with readers.

If your text is difficult to understand, your writing will repel rather than attract readers.

Readability is usually described as a grade-reading level. But readability also indicates how well your writing connects with readers.

Formal, stilted language, even though it is grammatically correct, can make what you say difficult to read.

Improve readability by using the simplest words. For example, instead of using former, use first. There will be no question in your reader’s mind about your reference.

Check out this excerpt on readability from our recent session, The Five Principles of Creating Clarity. You'll see how ProWritingAid's editing software can help you spot places where you may need to make your document easier to read.

Or, watch the whole video to find out how to make your writing as clear as possible for your readers.

Writing isn’t about showing how smart you are, it’s about getting people to read what you write, understand what you say, and follow your logic.

Use ProWritingAid's Style and Readability reports to identify places where you can simplify text for better understanding. Your readers will appreciate your direct, clear approach.

If you want to remind yourself to avoid using the words latter and former in your writing, you can set up a custom rule in your own personal ProWritingAid Style Guide.

Now that you understand how former and latter refer to people, places, or things—including ideas and concepts—start writing text that uses clear references. You’ll increase reader response to your business correspondence, articles, white papers, and books.