Everything You Ever Wanted to Know About Punctuating Dialogue

Dialogue serves many purposes in writing, especially in fiction. It can advance the plot, supply backstory, and show characterization.

But dialogue has its own grammatical rules, especially regarding punctuation. Where do the commas go? When do you use dashes? And what is the difference between a dialogue tag and an action beat?

“Have no fear!” the writer said. “I’ll tell you everything you need to know about punctuating dialogue!”

You might know that there are both single and double quotation marks. But how should you use them?

American English: “Put it in the trash can,” she said.

British English: ‘Put it in the rubbish bin,’ she said.

Quotes inside of dialogue might seem tricky. But all you have to do is alternate between single or double quotation marks, like these examples:

The king said, “We are not going to lose this war. We will do everything in our power to defeat the invaders. We have heart, but they do not.

“Bring everyone inside the gates. Have the blacksmiths forge as many weapons as possible. Ration the food to last through a long siege, and recruit any able-bodied citizen to fight.” 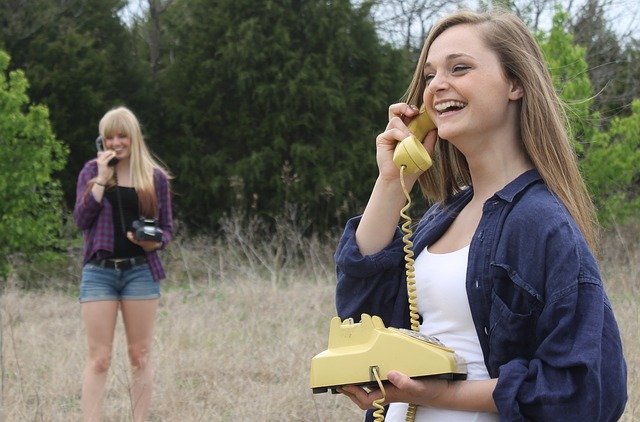 If the dialogue ends with a question mark or exclamation point in the quotation marks, you will still begin the dialogue tag with a lowercase letter. You will always end a dialogue tag, even if it contains another clause, with a period.

However, if the dialogue tag breaks a sentence in half, put a comma after the tag, then open the quotation marks with a lowercase letter (unless it is a proper noun).

The most common dialogue tags are “said” and “asked.”

In fact, using other dialogue tags like “shouted” or “squealed” will brand you as a novice. And it’s worse if you add an adverb.

Dialogue is one of many areas where ProWritingAid can help your writing shine. With the Dialogue Check, you can learn instantly what dialogue tags you’ve used and where to find them. 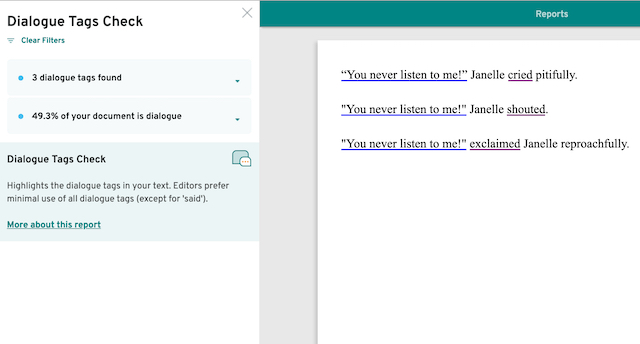 This helps you determine if you’ve used appropriate tags, if you shown rather than told, and if it’s clear who’s speaking.

Find out how you’re using dialogue tags with ProWritingAid.

Action beats are a great way to identify who is speaking without the repetition of he said, she said. They can show action or emotion and many other elements in a scene. However, they have different rules for punctuation.

Action beats are standalone sentences without a version of “said.” Therefore, you do not use commas to connect them with dialogue. In fiction, you will generally always end an action beat with a period, although some authors may use exclamation points on rare occasions.

But what if you use an action beat to interrupt dialogue? If you separate two complete sentences, you will simply place the action beat as its own sentence between two sets of quotes.

If you use an action beat to break up a sentence, you will use an em dash after you close the first set of quotation marks and immediately before you open the second set. Also, this action beat will not start with a capital letter unless it begins with a proper noun.

You can access the em dash with the keyboard shortcut Alt + 0151, or Option + Shift + Hyphen on Mac. Never put a space on either side of an em dash. 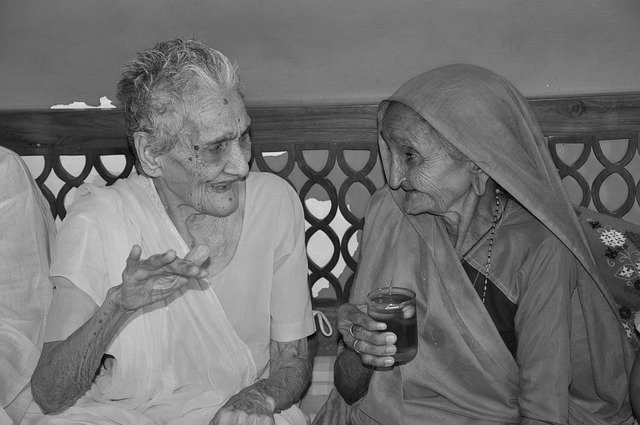 There are two ways you can show that dialogue has broken off before the character completes their thought. The first is by using the em dash again, although this time it goes inside the quotation marks.

If the character later continues what they were saying, you can start the new dialogue by placing an em dash after the new set of quotes.

“I can’t believe—”
Frances put her hand up to cut me off, but I pushed it away. “—that you are so rude!”

But if your character’s speech isn’t interrupted and instead trails off, you can use an ellipsis. The ellipsis contains three periods in a row—never more, and never less. Depending on your style guide, you may place spaces between each dot. The ellipsis will go inside of the quotation marks.

Other Dialogue Rules to Consider

Whenever the speaker changes, start a new paragraph. This helps prevent your readers from being confused about who is saying what. Always make sure that your dialogue tags and action beats provide clarity about who is speaking, as well.

What is your biggest challenge when it comes to writing dialogue? Let us know in the comment section.

Dialogue is a great way to reveal more about your characters while keeping the story moving.

armine
Really excellent article. The hardest thing for me in writing dialogue: making every word count.

amy.cohen
We're so glad that you enjoyed this article! Dialogue writing is no joke!