Analogy vs Metaphor: Understand the Differences

Creating a vivid image in your reader’s mind is a concrete way to create a memorable moment. Metaphors and analogies are literary devices you can use to fix an idea in your reader’s mind. They work differently because a metaphor is a figure of speech but an analogy is a logical argument.

“A metaphor is something, a simile is like something, and an analogy explains how one thing being like another helps explain them both.”

Let’s look at an example of the difference between a metaphor and an analogy.

Metaphor: Joyce is a pig.

Analogy: Joyce’s personal care and hygiene are the same as a pig who roots in the mud and rolls in the dirt day after day. 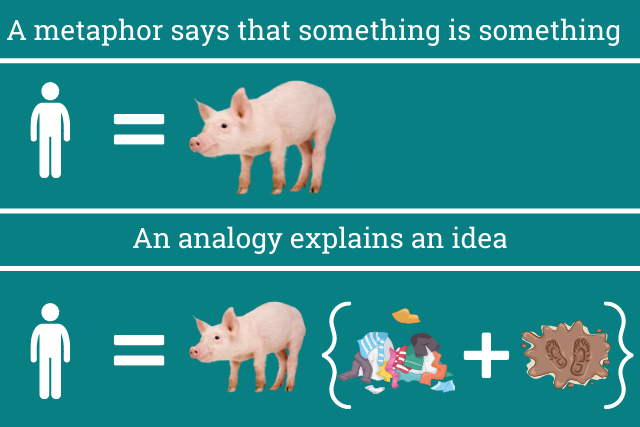 The goal of the metaphor is to create a mental image in your reader’s mind. The aim of the analogy is to show how two things are alike in order to make a point about the comparison.

With that introduction, let’s look at how metaphors and analogies work in your writing so you can spot the difference.

A metaphor serves as a figure of speech in writing. A word or phrase is used not literally but as a representation for a vivid effect. In other words, the word or phrase denotes an object to suggest a similarity that is not literal.

Metaphors bring color to your writing using concise words. This combination of economy of words and vivid imagery creates an emotional connection with your reader.

In Adrian McKinty’s Falling Glass, he describes a view of Hong Kong as “a mashup of Canaletto and Blade Runner.” This metaphor brings to mind a bay filled with boats in Venice combined with the super-modern architecture depicted in the film Blade Runner. It gives the reader an instant visual impression without slowing down the story.

McKinty’s metaphor suggests that Hong Kong looks like a bay filled with boats and a city of almost surreal modern buildings covered in neon. And he does that with just two short references that bring images alive in the reader’s mind.

Metaphors create an immediate connection with your reader by generating a visual image. The compressed imagery sparks a response to something familiar while leading to a new way of understanding the compared object.

A practical way to understand metaphors and how you can use them is through metaphor examples. Here are five ways you can use metaphors in your writing.

Metaphors are useful in fiction because they don’t detract from the storyline but add vivid imagery. A metaphor compresses a concept into an easily understood image.

2. Create a Sense of Familiarity

Because a metaphor uses familiar imagery, the reader instantly understands the reference.

3. Create An Image in the Reader’s Mind

Because a metaphor condenses down to imagery, the reader “sees” it in their mind. 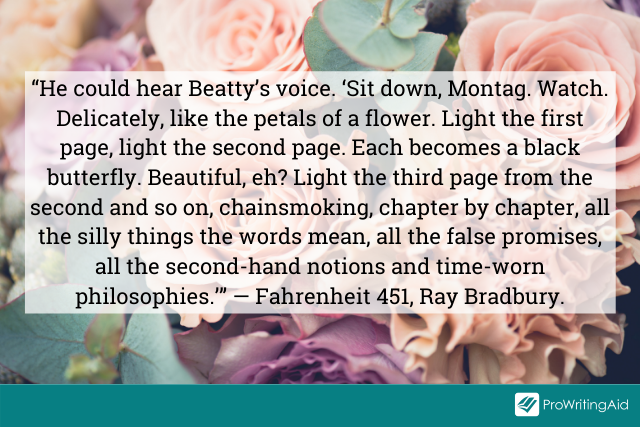 Because metaphors are concise, you can use them to pack an emotional punch.

When a character uses a metaphor, you get a sense of their worldview. Your reader instantly understands how that character sees the world. They understand the character’s personality through the metaphor (image) your character uses.

A metaphor is visual shorthand. It plays on the reader’s senses through sounds, images, scents, tastes, images, and touch to make an idea accessible. ProWritingAid’s Sensory Report makes it easy to check that your writing targets all five senses. 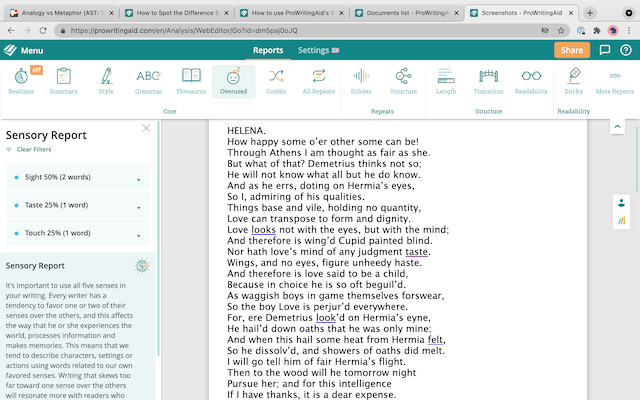 What Is an Analogy?

An analogy works by creating a logical argument comparing two things to make a point. Unlike the poetic figure of speech in a metaphor which lets one thing stand for another figuratively, an analogy aims to explain something.

An analogy uses two usually unlike things, and draws a conclusion from the direct comparison. It uses logic to present an argument.

American author E. B. White wrote a memorable example of an analogy:

“Explaining a joke is like dissecting a frog. You understand it better but the frog dies in the process.” 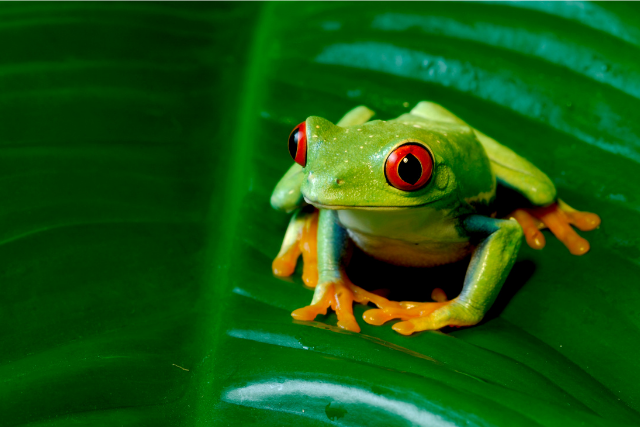 The analogy presents the argument of how the joke and the frog are similar.

Here are three ways you can use analogies in your writing.

While a metaphor creates a visual image, an analogy uses familiar concrete terms and images to solidify a concept. The familiar terms help to illustrate exactly what the writer wants to say.

Analogies work well in fiction to explain a concept without taking a reader away from the storyline. That way the writer avoids long narrative explanations.

Here are some examples of analogies in literature:

2. Create An Image in the Reader’s Mind

References to familiar terms and objects help grab a reader’s attention. Then, the explanation of their relationship works to consolidate the idea. The visual imagery creates a concrete image, often an image with emotional overtones.

The images are a shorthand for understanding the logical concept. 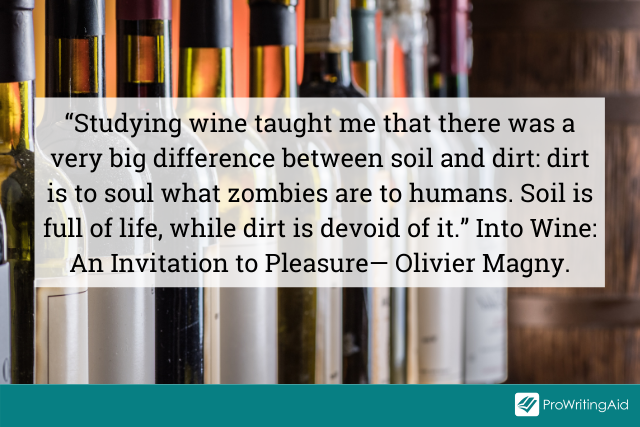 Here, the writer uses the image of zombies as opposed to humans to emphasize his point. Anyone who has held rich soil in their hand knows how it feels and smells.

And they know how dirt coats the side of their car or dusts their shoes. Without mentioning soil chemistry or physics, the writer evokes the difference and why soil content is important to vineyard culture.

The best use of an analogy is to lead the reader to a logical conclusion in a visual and concise manner. Non-fiction writers use analogies to introduce and summarize major points.

Speech writers use analogies to help an audience understand their point without a long, tedious explanation. They know that a speech must move in order to maintain audience attention.

Here are some examples from non-fiction and speeches:

The Differences Between Metaphors and Analogies

While both metaphors and analogies are concise and rely on visual imagery, the intent is different.

An analogy may incorporate metaphors to strengthen imagery in the comparison. The emotional power of metaphors boosts interest in the logical conclusion.

The best way to identify and separate metaphors and analogies is to examine the aim. 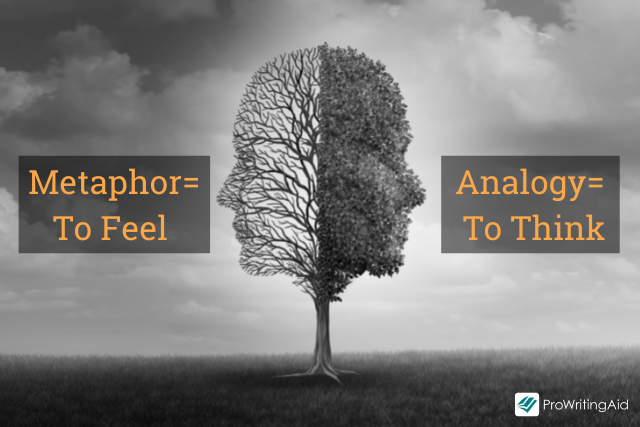 The best way to learn how to tell the difference is to read. Metaphors and analogies are common literary devices—look out for them in the next book you pick up. Your own writing will improve as a result.

tony.h.ridler
Dreaming, is a metaphor, for life, and, “life could be a dream”, in metaphor!

millie.dinsdale
This is the comment of the week, Thank You for this!

kyle.kucera1
We're so glad you enjoyed the article! :)