Won't vs Will Not: What's the Difference? 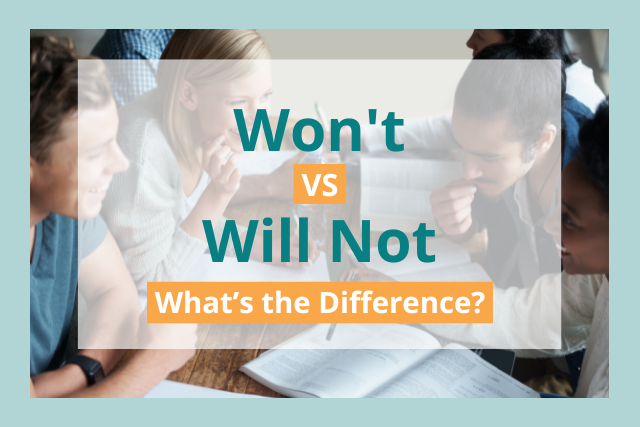 Won’t and will not are two words that mean the same thing, but you shouldn’t always use them in the same contexts.

The short answer is that won’t is the contracted form of will not, which means it’s slightly more informal.

Read on to learn how to use won’t vs will not correctly.

What’s the Difference Between Won’t vs Will Not?

Won’t is a contraction of the phrase will not. It’s a shorter way to say the same thing.

You can use both won’t and will not to indicate that something is not going to happen in the future. The only difference is that will not is more formal, while won’t is more informal.

Let’s take a closer look at the difference between these two words.

When to Use Won’t

Because won’t is a shortened form of will not, it feels more informal and more modern.

It’s very natural to use won’t when speaking out loud. Saying will not out loud might feel too stiff and overly polite.

You can also use won’t in informal writing, such as emails to your colleagues or blog posts on the internet.

When to Use Will Not

You should stick to will not in formal writing, such as in an academic essay or a legal document.

Finally, you can use will not if you’re writing something that isn’t meant to feel modern, such as a historical fiction story set in a time period before the 20th century. 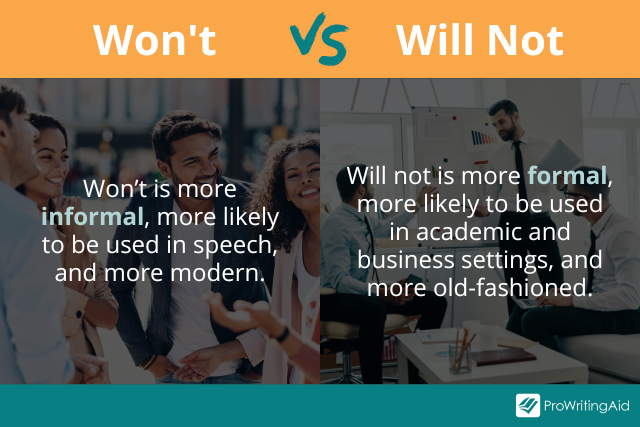 Won’t vs Will Not Examples in Sentences

Here are some example sentences of won’t from popular English books.

“I would die for you. But I won’t live for you.”—Stephen Chbosky, The Perks of Being a Wallflower

“Mom and Dad won’t be pleased if they find out."—Cassandra Clare, City of Ashes

“Don’t give in to your fears. If you do, you won’t be able to talk to your heart.”—Paulo Coelho, The Alchemist

“I won’t ever leave you, even though you’re always leaving me.”—Audrey Niffenegger, The Time Traveler’s Wife

“Too many of us are hung up on what we don’t have, can’t have, or won’t ever have. We spend too much energy being down, when we could use that same energy—if not less of it—doing, or at least trying to do, some of the things we really want to do.”—Terry McMillan, Disappearing Acts

Now here are some examples of will not in sentences:

“Well, they shall see what the earnest will of a determined man can do. I will not yield, I will not retreat even one inch; and we shall see who shall triumph in this great contest—man or nature.”—Jules Verne, Journey to the Center of the Earth

“He is a weapon, a killer. Do not forget it. You can use a spear as a walking stick, but that will not change its nature.”—Madeline Miller, The Song of Achilles

“The city does not know itself; it will not feel the parasites that grow upon its skin until it is far too late. This city is a miscellany of parts smashed together and functioning in one collective stride.”—Chloe Gong, These Violent Delights

“The body clings to life, as ivy to a wall, and will not easily let go.”—Maggie O’Farrell, Hamnet

“I will not say it was an easy decision, but it was the only one I could have made. The world was on fire and Theseus was a shaded green pool.”—Jennifer Saint, Ariadne

Conclusion on Won’t vs Will Not

In short, the difference between won’t vs will not is formality. 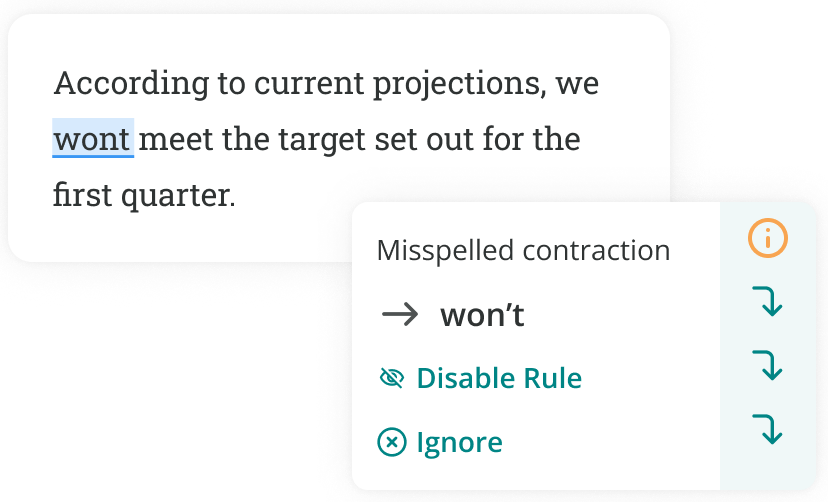 You can set your document type in ProWritingAid so that you match the appropriate formal or informal style. This will allow you to make sure your word choice and syntax fit what you’re writing.