Whose vs Who’s: What’s the Difference? 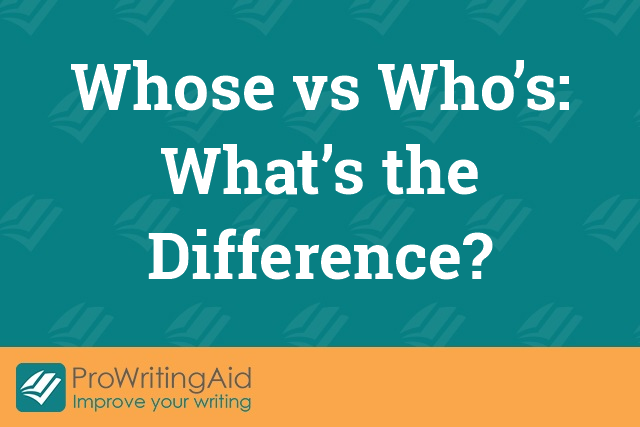 What Is the Difference Between Whose and Who’s?

Whose vs. who’s is one of the easiest mix-ups in English. Even though both words contain "who," they have different meanings and are different parts of speech. This difference means that the two words can't be used interchangeably. 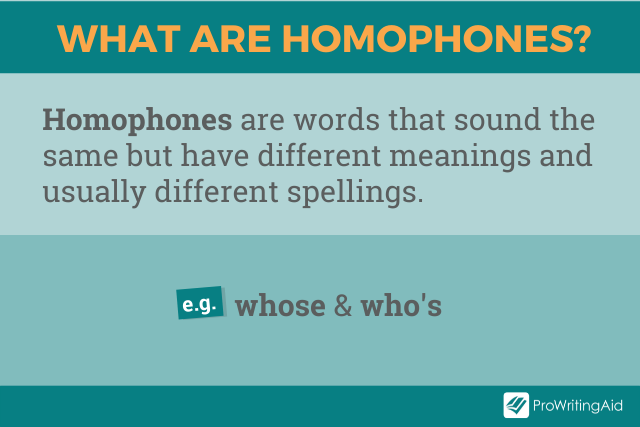 In short, the difference can be summed up like this:

To better understand the difference between whose vs. who’s, we need to dive deep into the definitions of each word, as well as their grammar functions. Let’s get started!

Whose and who’s are tricky homophones. These words sound alike, but they don't have the same meaning at all.

Keep reading to learn more about the difference between whose and who’s.

What Does Whose Mean?

Whose is used to indicate that something belongs to or is associated with a person or thing that has previously been mentioned.

Here, whose means that the dog is associated with the paw prints—he left them on the carpet.

Because whose doesn’t give us enough information on its own to work out who someone is talking about, it is used after you have already mentioned a specific thing or person, or in a question when you don’t know who you are talking about.

This gets easier with examples:

In this sentence, whose shows that the hair being talked about belongs to the man. Without referencing the man first, we wouldn’t know what subject whose was referring to.

But if we want to know who something belongs to, we can use whose in a question, like this:

What Kind of Word Is Whose?

Okay, now we’re going to get a bit more grammatical.

Whose is technically always a possessive pronoun. That means that it shows possession or ownership. For example, in the question "Whose phone is this?" you’re asking who owns the phone.

However, whose is also often used as a possessive adjective. What does this mean? It takes a few steps to explain.

A pronoun (like he, she, it) is a word that replaces a noun (a thing, person, or idea), especially a proper noun (a name).

Whose is a possessive pronoun, which means it shows possession or ownership. It replaces the person or thing to whom something belongs in a sentence.

Look at the following example.

In this example, whose is showing that the eyes belong to the girl. But it’s also doing something else. At the same time, it is telling us which girl we are talking about by describing her.

Because of this dual function, this possessive pronoun is also functioning like a possessive adjective. It’s a stand-in for the girl, like a pronoun, but it is describing ownership of the eyes, like an adjective.

An example of this would be asking:

Whose is replacing a specific noun, and we would need more context to know what object is being referenced.

Whew. That’s a lot of definitions.

In short, whose is a possessive pronoun that indicates ownership or belonging. 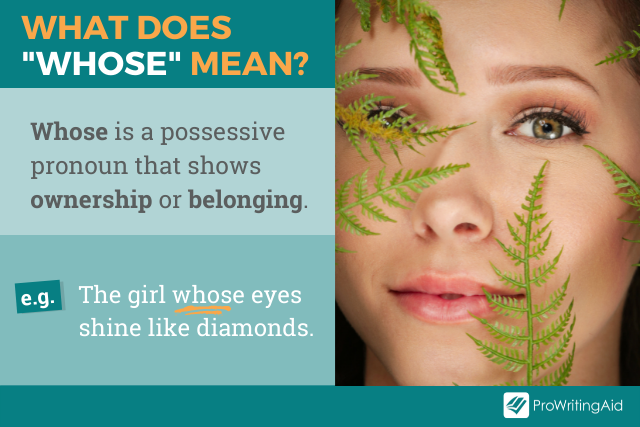 How Do You Use Whose in a Sentence?

Let’s look at some examples of how to use whose in your writing.

Notice that each of these sentences references a noun or pronoun in the possessive form. It’s talking about possession, which is why we are using whose.

What Does Who’s Mean? 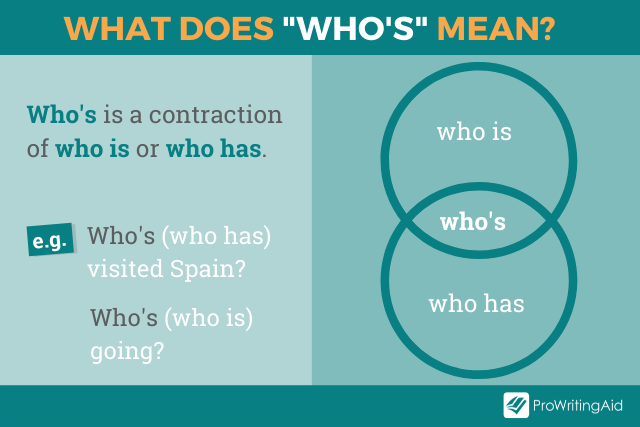 A contraction is a way to combine and shorten words, usually two words or more. We speak in contractions often, so it’s important to use them in informal or conversational writing.

Who is also pronoun but it isn’t the possessive form like whose. Instead, it is a questioning or interrogative pronoun (which means it is used to ask a question).

The apostrophe in who’s replaces part of the verbs is or has in the phrases who is and who has.

To determine whether the contraction means who is or who has, the context of the rest of the sentence or conversation is crucial.

When who’s means who is, it’s dealing with the present tense. The word "who" is followed by either a verb, adverb, or adjective, like in the examples below. 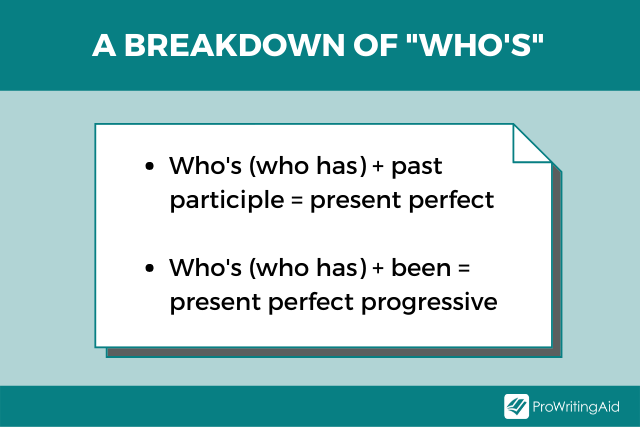 Present perfect is a tense that references something that occurred in the past at an unspecified time or began in the past. When this is the function of who’s, it precedes a verb.

For example, "Who’s been a writer for more than five years?" We know this sentence contains the contraction for "who has" because it’s asking about someone who started being a writer in the past and is now still a writer in the present.

How Do I Use Who’s in a Sentence?

Now let’s look at some examples of how to use who’s in a sentence. Since who’s can be a contraction for two words—"is" and "has"—we need examples of both.

We'll divide these up between "who is" and "who has" to really help you understand how who's is used.

Here are some examples where who’s is a contraction of "who is." 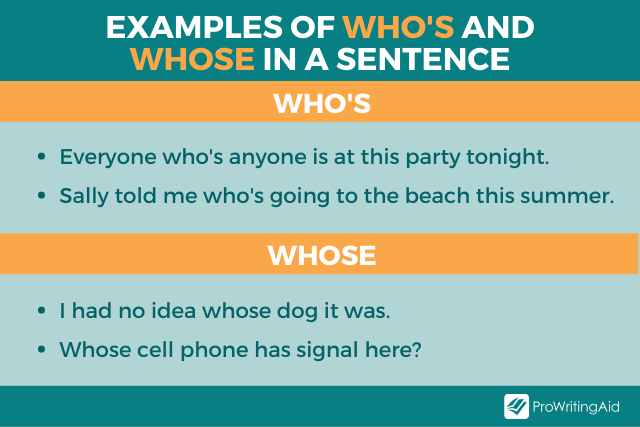 If you read all of the examples above and replace who’s with "who is," they’ll still make sense. But what about the other use of who’s?

While replacing who’s with "who is" doesn’t make sense, "who has" does. That’s how we know to use_ who’s_ in each of these sentences.

How Can I Remember the Difference Between Whose vs Who’s? 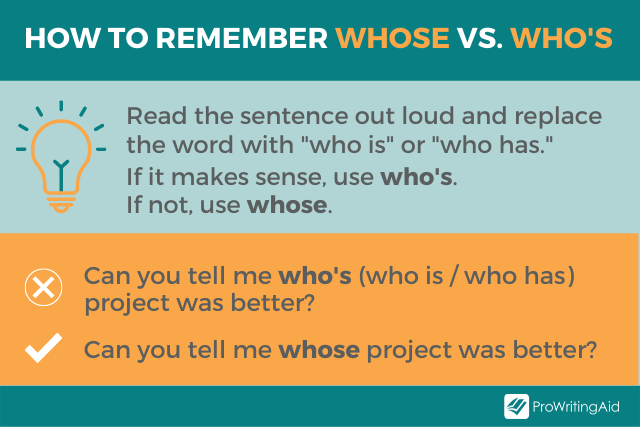 Those were some pretty technical definitions of whose and who’s. When you’re in the flow of writing, you might not think about the intricacies of grammar, like parts of speech and verb tenses.

So what’s an easier way to remember the difference between whose vs. who’s_ in the moment?

If you’re looking at your writing and can’t decide whether to use whose or who’s, read the sentence out loud and replace the word in question with "who is" and "who has."

If it makes sense with one of those, you’ll use who’s. If it doesn’t make sense, use whose.

Typos are embarrassing. If you’re worried about using the wrong word, use ProWritingAid to highlight confused words as you write.

Download the free browser extension to catch this and 1000s of other errors wherever you write.

Whose vs. Who’s Test

Are you ready to test your knowledge in the great battle between whose vs. who’s? Take a look at these example sentences and decide whether to use who’s or whose.

How did you do?

That’s everything you need to know about these tricky homophones. We hope you have a greater understanding of the difference between whose vs. who’s.