What are Phonemes, Graphemes, and Digraphs? 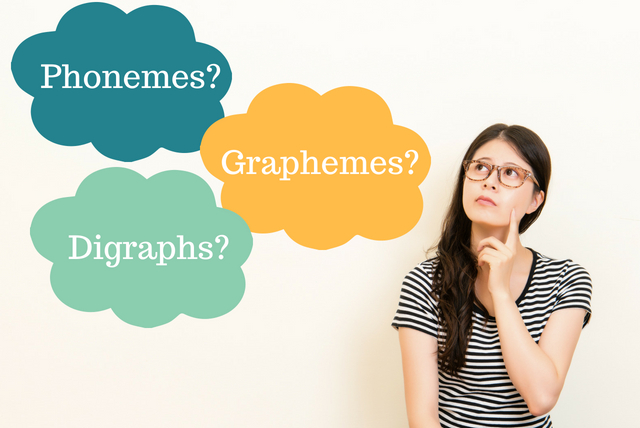 We keep hearing from parents and students that they just don't understand this new vocabulary that teachers are using. So here is a quick lesson on the three terms that seem to be causing the most confusion!

We learn how to read by sounding out words phonetically and by matching sounds with letters or groups of letters.

Each sound that you hear in a word is a Phoneme. It’s the smallest unit of sound that makes up a complete word. This is not to be confused with the letter itself; Phonemes are only the sounds made. It's important to understand that Phonemes can be made of more than one letter.

Take the word dog for example. There are three Phonemes involved: the “d” sound, a short “aw” sound, and a “g” sound.

And for something a little more difficult, the word “school” has four Phonemes: the “s” sound, a “k” sound, a long “uu” sound, and an “l” sound.

There are 44 Phonemes in the English language, consisting of 24 consonant sounds and 20 vowel sounds. Think of the different combinations of consonants and vowels (like “ch” or “ea”) that make unique sounds.

A Grapheme is a symbol used to identify a phoneme; it’s a letter or group of letters representing the sound. You use the letter names to identify Graphemes, like the “c” in car where the hard “c” sound is represented by the letter “c.”

To confuse everyone, some Phonemes (sounds) can be spelled with different Graphemes (letters).

Finally, a Digraph is a two-letter Grapheme that makes one sound. For example, consider the “ch” in choose, “sh” in shut, or “oa” in boat.

A Split Digraph is when an “e” on the end of a word makes the middle vowel long, such as the the difference between “din” and “dine.” They both have three Phonemes (sounds), but the Split Digraph in “dine” makes the long “i” sound.

Now to test your understanding: what’s a Trigraph?

(Here’s a hint: The answer is not too “high” above your ability.)

Phonemes, Grapheme, and Digraphs (not to mention Trigraphs!) may seem complicated, but practice makes perfect!

All you have to do is remember that each of these three terms is related to how letters come together to make sounds. Here are some tricks to help you remember: