Thy: Definition and Meaning 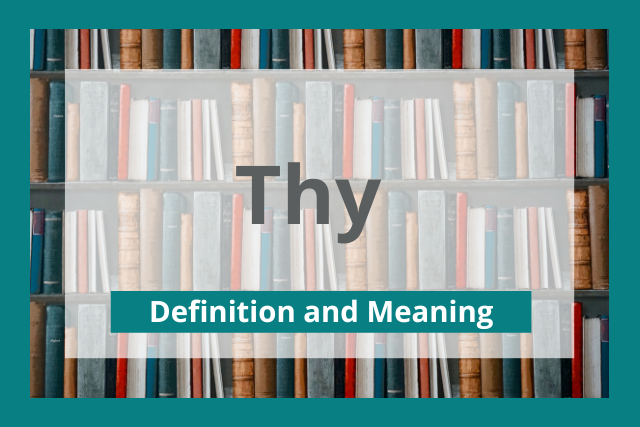 Archaic texts can be confusing, especially when they use pronouns we don’t use in the modern English language.

Thy is a possessive form of thou. It means “your” and is used before a noun that begins with a consonant.

Let’s learn more about what thy means and how to use it correctly.

Thy always comes before a noun. For example, “thy body” means “your body.”

Usually, thy only precedes a noun that begins with a consonant, although some texts place thy before a vowel. However, it was more correct to use thine before nouns that began with a vowel or vowel sound. Here’s an example:

These days, of course, we use “your” instead, regardless of what the following noun begins with. 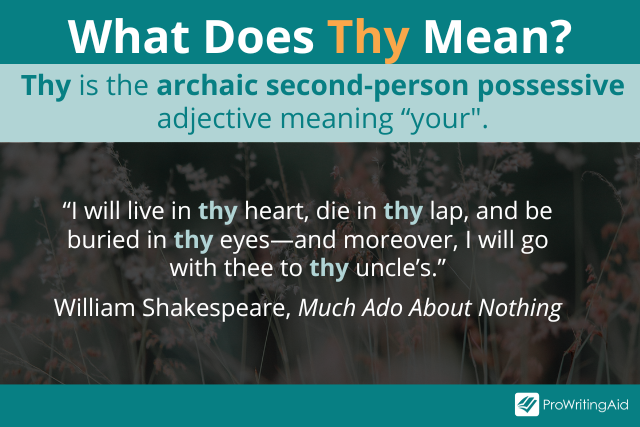 The origin of thy dates all the way back to the Old English thīn, which was the genitive (possessive form) of thū, which later became thou. By the twelfth century, the possessive adjectives were thine and thy in Middle English.

Thy and its related pronouns continued into early Modern English. However, by the mid-sixteenth century, usage had sharply declined. Using thou, thee, thy, and thine was mostly derogatory by this point. It was often used to denote your social inferiors.

Shakespeare’s work is a great example of this usage. People often associate words like thy with the Bard, but his plays usually reserve thou and thy for either close friends, subordinates, or characters the speaker dislikes.

Another major source that uses words like thy frequently is the Bible. Certain translations, such as the King James Version, use thy and its related pronouns.

Thy stuck around in British English in certain religious sects, but it never made its way into modern American English after the Puritan colonies ended.

Examples of Thy in Sentences

Understanding how to use archaic pronouns is easier the more you read them. Let’s look at some examples of how to use thy from some famous texts.

“I will live in thy heart, die in thy lap, and be buried in thy eyes—and moreover, I will go with thee to thy uncle’s.”—William Shakespeare, Much Ado About Nothing

“Save for thee and thy lessons, man in society would everywhere sink into a sad compound of the fiend and the wild beast; and this fallen world would be as certainly a moral as a natural wilderness.”—Hugh Miller, My Schools and Schoolmasters, or the Story of My Education

“Seek not, my soul, the life of immortals; but enjoy to the full the resources that are within thy reach.”—Pindar, Pythian Odes

There you have it—everything you need to know about the archaic word thy. 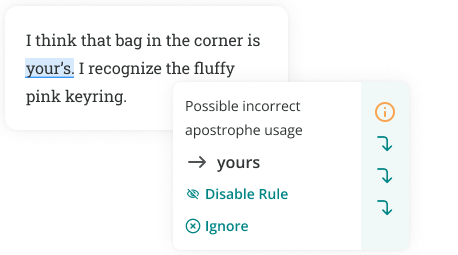 For your modern pronoun usage, however, you can use ProWritingAid’s free grammar checker, which can ensure you’re always using the correct form.