Thru vs Through: What's the Difference? 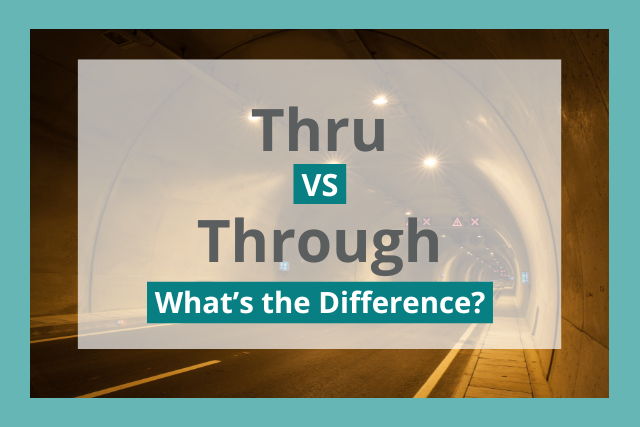 The words thru vs through have evolved through the years. Both words mean the same thing, but thru is a more modern spelling.

Through should be used in formal writing, while thru is more appropriate in informal writing and when referring to “drive-thru” windows at restaurants or businesses.

In this article, we’ll discuss the difference between thru and through, their definitions, and how to use them in sentences.

What’s the Difference Between Thru vs Through?

Through and thru are often used interchangeably. They both mean the same thing; however, thru is more suitable for informal use, while through is the go-to for formal writing.

If you’re sending a text to your friend or making a post on Facebook, then you can use thru. But if you’re writing a cover letter or turning in an essay, we suggest sticking to through. 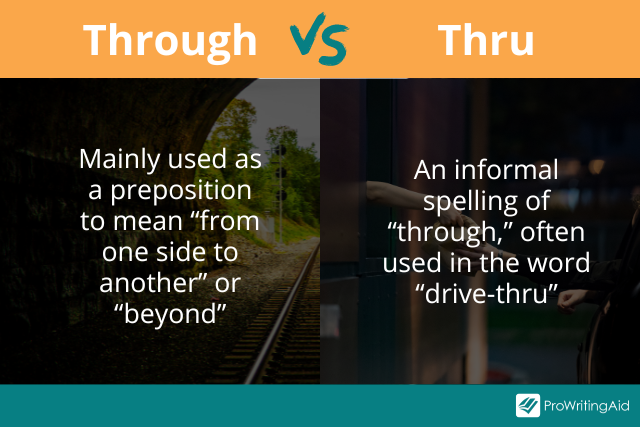 Thru Definition and Meaning

Thru is non-standard spelling for through that has become more acceptable over time.

When Is It Okay to Use This Abbreviation?

If you’re going to use thru, it’s best to keep it in casual settings, like texting your friends. Avoid using it in your professional and academic writings.

We also use thru when referring to drive-thru windows at restaurants or other businesses. In some cases, we can see thru on traffic signs.

Through Definition and Meaning

Through can be an adjective, a preposition, and an adverb. In all of these functions, it essentially means “from one end to another.”

When used as a preposition, through means “from one side of a person or thing to another,” “past a stage or barrier,” “because of,” or “from beginning to end.”

Let's look at a few examples of each of these meanings:

1) Movement from one side of a person or thing to another.

2) Past a stage or barrier

4) From the beginning to the end of an activity, a situation, or a period of time

When used as an adverb, through means “to completion,” “over an entire distance,” and “in at one end and through the other.”

Here are some example sentences of each meaning.

1) Completion, as it relates to an accomplishment or along the extent of something

2) Over an entire distance

3) In at one end and through the other

When used as an adjective, through describes “something that is done or finished,” or “an item going from a point of origin to a destination without change.” Here are a few examples of how this looks in a sentence.

Examples of Through Used in Sentences

Here are some examples of through used in famous literature works. Do you recognize any of these quotes?

“In one word, Queequeg, said I, rather digressively; hell is an idea first born on an undigested apple-dumpling; and since then perpetuated through the hereditary dyspepsias nurtured by Ramadans.”—Herman Melville, Moby Dick

“I’m just going through a phase right now. Everybody goes through phases and all, don’t they?”—J.D Salinger, Catcher in the Rye

“Through all my punishments, disgraces, fasts and vigils, and other penitential performances, I had nursed this assurance; and to my communing so much with it, in a solitary and unprotected way, I in great part refer the fact that I was morally timid and very sensitive.”—Charles Dickens, Great Expectations

Examples of Thru Used in Sentences

Here are a few examples of thru being used in a sentence. Always remember that you should avoid it in formal writings.

Conclusion on Through vs Thru

Let’s sum up what we’ve learned.

Through is the official spelling and means “from one end or side of something to the other.” It mainly functions as a preposition, but can be used as an adjective and an adverb.

Thru is an alternate spelling for through that should only be used in informal contexts. You can check your spelling and consistency with ProWritingAid’s grammar checker.