Spaces Between Sentences and Words: How Many Should You Use? 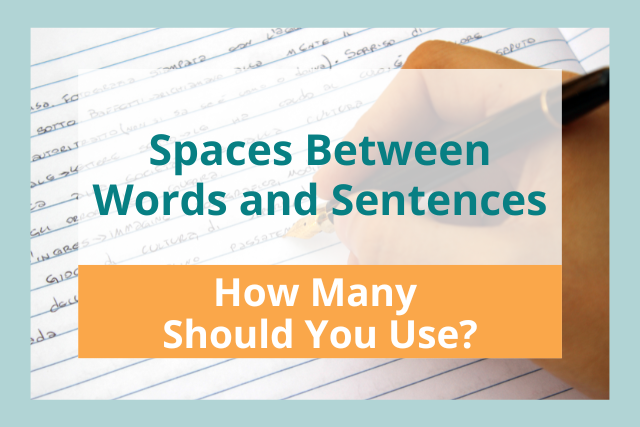 Some people learned in school that two spaces should separate each sentence in a paragraph, while others were taught that you should only use a single space. Which rule is correct?

The short answer is that you should only use one space between words and sentences. The rule about using two spaces between sentences is outdated advice that only applies to typewriters, not to modern word processors.

This article will explain how to correctly format spaces between sentences and give you our best tips for fixing incorrect spacing.

How Many Spaces Do You Need Between Words and Sentences?

The best practice is to use only one space between words and sentences.

This rule holds true whether you’re writing essays, emails, novels, or any other form of writing.

Why Were Some People Taught to Use Two Spaces?

Before digital word processors existed, most people learned to type on typewriters.

Typewriters have wide letters that take up more space, as well as uneven spacing between words, which makes paragraphs harder to read.

If you learned to type on a typewriter, you were probably taught to leave two spaces after a punctuation mark that indicates a full stop, such as a period, question mark, or exclamation point. This rule was standard practice to help separate sentences more clearly.

Why Is One Space Correct Now?

These days, it’s important to use one space between sentences, not two spaces. This change happened when people switched to typing on laptops and computers rather than on typewriters.

Digital word-processing software, like Microsoft Word or Google Docs, uses proportional typesetting. This means that the program automatically adjusts the width of each letter to make your writing easy to read.

With proportional typesetting, using two spaces between sentences does nothing to improve readability. Instead, it just looks awkward and jarring since the font is already adjusted correctly if you use one space. That’s why the two-space rule is considered incorrect now.

When Should You Still Use a Double Space Between Sentences?

Typewriter-style fonts, also known as monospaced fonts, are fonts where every letter is the same width. These fonts include Courier, Consolas, and Menlo.

It’s worth noting, however, that monospaced fonts are generally considered to be harder to read than proportional fonts, so you should avoid using them unless you’re required to. 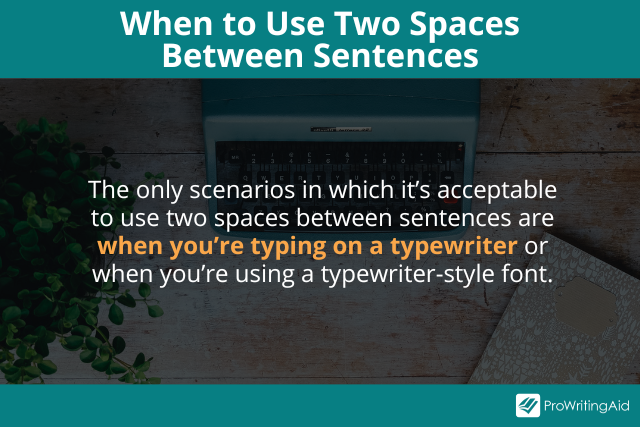 Reasons to Use One Space Between Sentences Instead of Two

If you’re reluctant to change your typing habits, you’re not alone—many people still want to use two spaces after a punctuation mark.

But there are many reasons to follow the one-space rule. Here are just a few:

1. Too Much White Space Bothers Readers

Documents need just the right balance of white, or blank, space. With a modern word processor, using an extra space will look like a river of white flowing through your document.

A “river of white” disrupts the balance between text and white space and makes your writing harder to read.

Most people associate double spacing between sentences with documents written before personal computers were widespread.

When people read an email or book with two spaces between sentences, they might feel like someone who’s out of touch with the modern world wrote it. You don’t want that to be anyone’s first impression of your writing.

3. Double Spaces Are Harder to Edit

When you proofread your writing, only using single spaces makes it easier to check for consistency.

If you’re writing for a company or academic institution, they probably have an official style guide that they’d like you to adhere to, so it’s important to follow that style guide’s spacing rules.

Even if you’re only writing for yourself, it’s still a good idea to stick to a widely used style guide, so readers don’t find your writing strange or jarring.

If you’re used to using extra spaces after a punctuation mark, it might be hard to break the habit.

Don’t worry—there are easy ways to fix your spacing without manually combing through your document.

Here are our top tips for making sure you’re using correct spacing on a modern word processor.

How Do You Check If Your Spacing Is Correct?

ProWritingAid will highlight incorrect formatting for you, including double spaces between sentences. That way, you can fix your mistakes with a single click. Try our free grammar checker here. 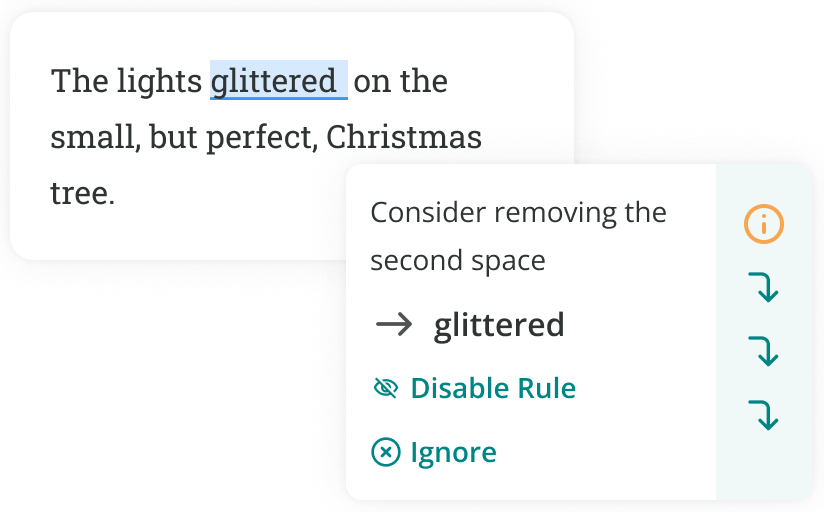 How Do You Quickly Fix Incorrect Double Spaces?

In many word processors, you can quickly remove all double spaces using the “Find and Replace” functionality.

What If You Need More Space Between Words?

If, for some reason, you need to use more space between words, you can consider using the “tab” key instead of an extra space. This practice will ensure that your words are correctly aligned.

There you have it—a complete guide on how to master spacing between words and sentences.