Are you excited to write a science fiction story but unsure what to write about? Using a writing prompt is a great way to get started.

You can start with the categories that you’re most excited about, or read through all of them to see if anything unexpected tickles your imagination. 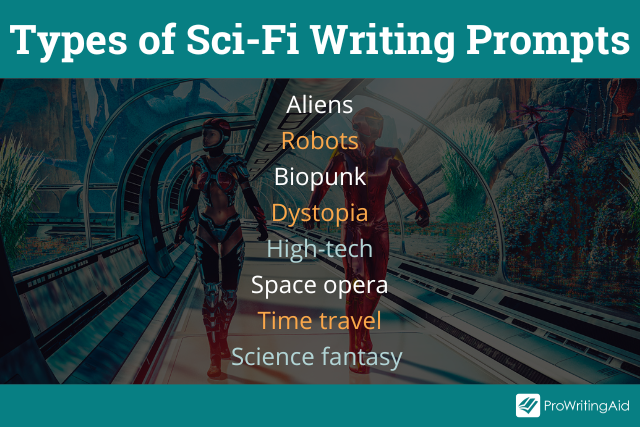 This article has 80+ science fiction story ideas that you can use for your next novel, screenplay, or short story. Happy writing!

The alien subgenre is a classic in science fiction literature. Different writers have envisioned countless scenarios for what might happen if we discovered other life in the universe. 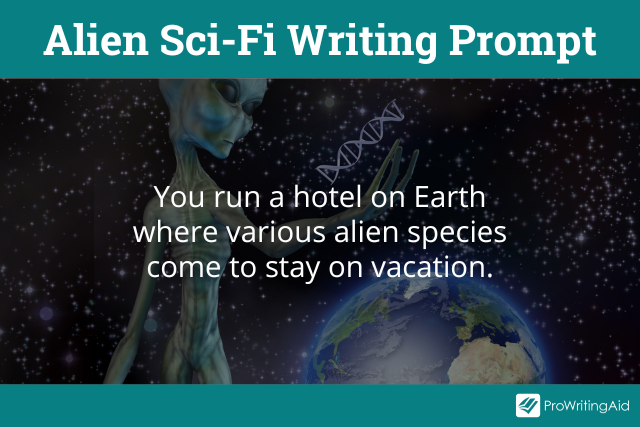 Biopunk is a subgenre that grapples with the implications of biotechnology. What happens when humans learn how to engineer and augment their own bodies?

If you like critiquing the state of our society or political system, dystopian world building is a great way to do it. This subgenre lets you interrogate the dark side of government control and the erasure of individual autonomy.

Many science fiction stories imagine new types of futuristic technology that might change the way we interact with the world, from virtual realities to extreme social media. If you like inventing new things, this sub-genre could be an exciting one to try.

Robots and artificial intelligence are another classic science fiction subgenre. What happens when people create machines that are smarter than we are? 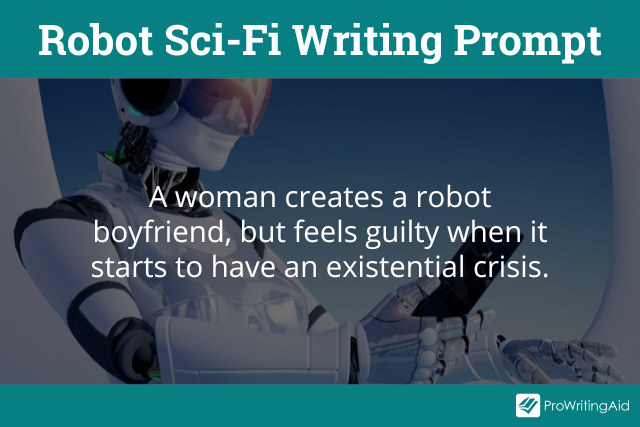 Science fantasy lives at the intersection of science fiction and fantasy. Who says stories based in science can’t have a little magic too?

Space opera stories are adventures set in outer space, full of action, drama, and romance. There are a lot of different directions you can take these stories. 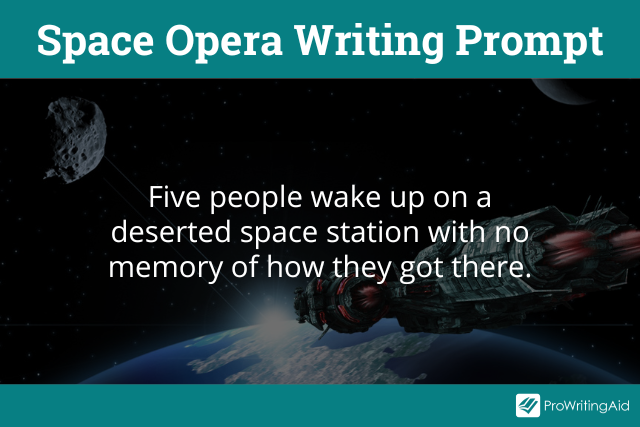 Time travel is an exciting element of science fiction! If you’re a history buff, you might send your characters back to big events in the past. If you like logic puzzles, you might want to figure out a tricky series of actions in time.

Remember that a prompt is just a starting point. You still need to decide how you’re going to put your own unique twist on the story.

Most of these science fiction ideas have been used many times before, but that doesn’t mean your story can’t be original and unique.

For example, E.T. and Lilo and Stitch are two movies that could conceivably have originated from the same prompt—“a kid discovers an alien and keeps it as a pet”—but they’re very different movies. 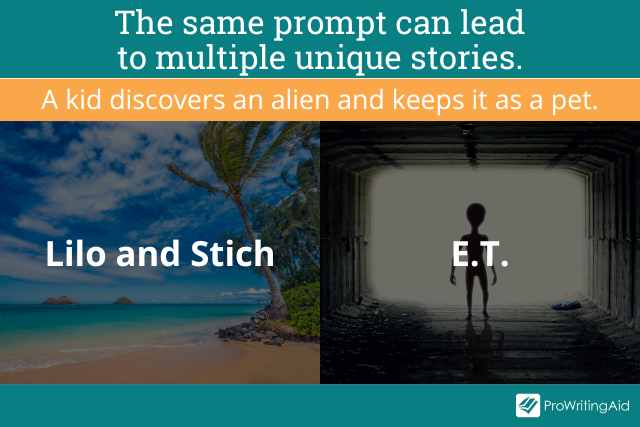 Here are some tips for how to use these prompts to create exciting and original stories.

You can consider combining a prompt with an idea for a character or setting, or even with a second prompt.

For example, maybe you want to take an alien prompt and a time traveler prompt and include both in the same story by making the aliens turn out to be humans from the future. When you let two ideas collide, new and exciting possibilities can arise.

Tip #2: Write What You Know

“Write what you know” is a great adage that applies even to science fiction. That’s how you create an original, authentic story that resonates with readers.

Using your real life as a starting point for a story can imbue it with your own perspective and voice.

An interesting premise is important, but there are other skills you need in order to flesh out your writing. Craft elements like character development and world building are still crucial for creating a good story.

Tip #4: Write with a Friend

Writing doesn’t have to be a solitary activity! It can be fun to write the same prompt with a friend and then trade stories. Chances are, you’ll be surprised by the different ways you and your friend can use the same idea.

If you’re excited to try some of these prompts and meet other sci-fi writers, don’t forget to register for our free Science Fiction Writers’ Week. 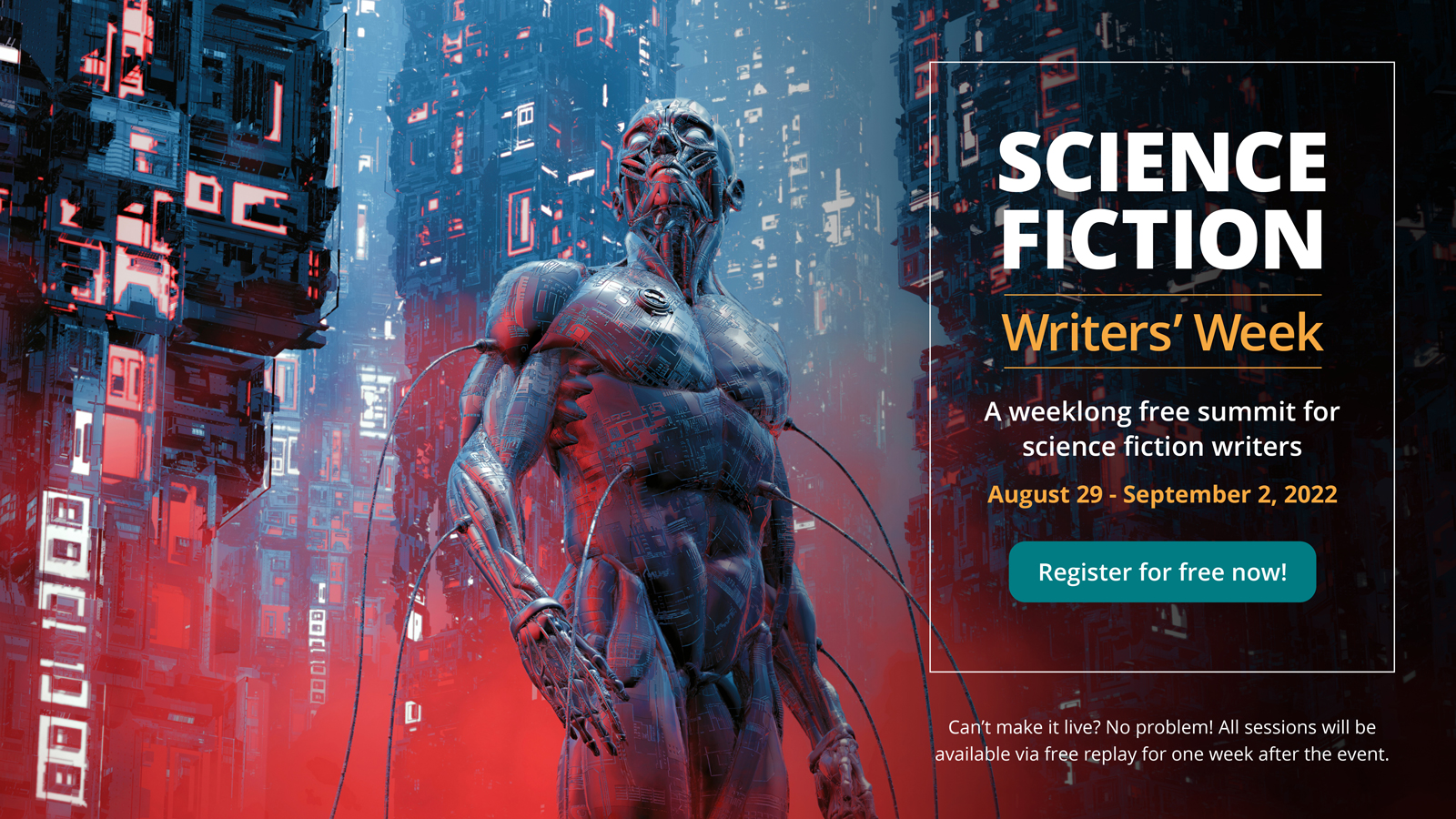 We have sessions from bestselling authors such as Andy Weir, Nghi Vo, Gareth Powell, and more.