Pice probably isn’t a word you’d use in your day to day life—not intentionally at least. You may have used it mistakenly when trying to use the word piece.

But pice is an actual word and not just a common typo. Pice were types of coin used in British-ruled India equal to one-fourth of an anna.

In this article, we’ll look a bit more into meaning of pice, how it’s used in a sentence, and commonly confused words.

What Does Pice Mean?

Pice is the plural form of the currency pie, which was an aluminium or bronze coin and monetary unit. It is a discontinued small copper coin of the East Indies, worth less than a cent, the lowest denomination of the Indian rupee.

Pice is also commonly called paisa, which is the Hindi word. Both terms can be used interchangeably. 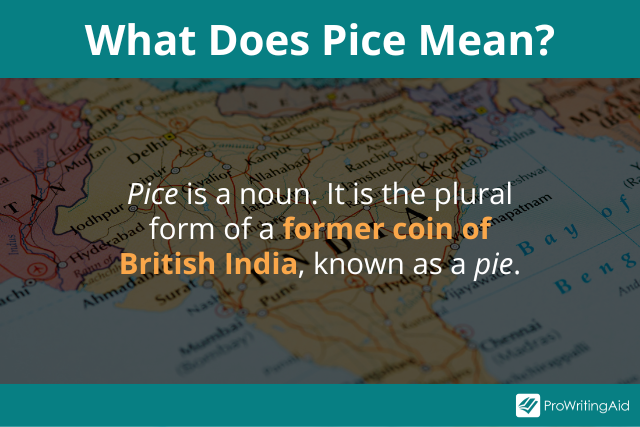 As a note to the fact that pice represents a low monetary value, there are small low-budget hotels located in India that largely cater to poor immigrant workers.

These are called Pice hotels, and they derive their name from the Hindi word paisa. They are a source of affordable and homey nourishment consisting of traditional Indian meals.

Pice vs Piece: What’s the Difference?

The words pice and piece are often confused because of their similar spelling. We’ll explain the difference.

Piece is a noun that means a part of a larger whole, usually one that is able to be separated from other parts. It can also be used as a verb to mean to mend, complete, or put together.

A good way to remember the difference is a PIEce of the PIE.

Another way to remember the difference is to note that you’re less likely to use the word pice than you are the word piece.

Pice is so uncommon that ProWritingAid will flag it as a potentially confused word. Use our free grammar checker to find other accidental typos and confused words.

Should I use piece of cake or pice of cake?

The correct phrase is piece of cake. These phrases are often confused because they appear similar.

Example Sentences with Pice and Piece

Let’s look at some example sentences of each word so you can better understand the difference.

Pice is a noun. It is the plural form of a former coin of British India, known as a pie. It is considered a low monetary unit, valuing less than one cent.