Oxymoron vs Paradox: What's the Difference? 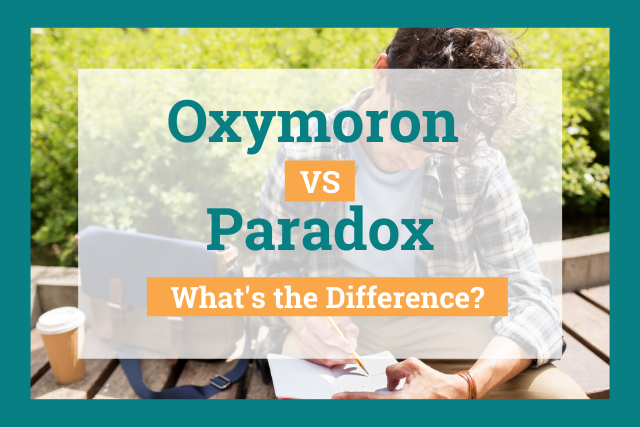 A lot of writers confuse the terms paradox and oxymoron. Both words are used to describe things that contradict themselves, however, they're not entirely interchangeable.

So, what exactly is the difference between an oxymoron and a paradox? 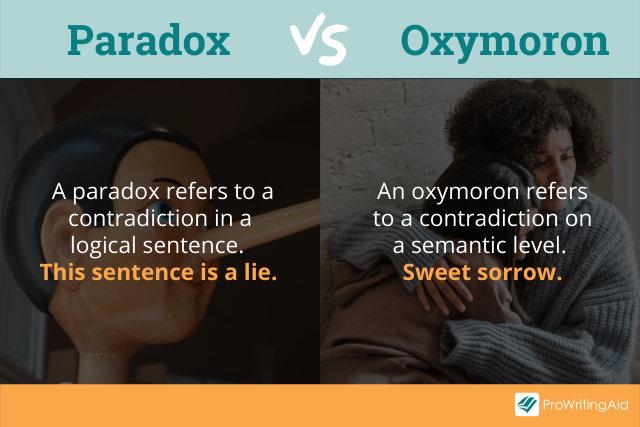 This article will explain the difference between a paradox and an oxymoron in more detail and help you use these two terms correctly in your writing.

Quick Summary of a Paradox

A paradox is a statement or group of statements that contradicts itself.

The idiom “You need to spend money to make money” is a paradox, because it seems to contradict itself.

After all, you’d expect to lose money when you spend money, but investing your money in the right ways can actually help you grow your wealth.

Often, paradoxical statements like this one reveal a deeper meaning. Contrasting two opposite ideas can lead to an unexpected truth.

A famous example of a literary paradox is the quote “All animals are equal, but some are more equal than others” from George Orwell’s Animal Farm.

It shows that equality is meaningless if it applies differently to different animals.

There are also visual paradoxes, such as M.C. Escher's famous painting “Relativity,” in which a series of staircases cross each other in an intricate pattern.

Quick Summary of an Oxymoron

An oxymoron is a figure of speech that consists of two contradictory words.

You can create an oxymoron by combining opposite words in the same phrase. This creates a fun, memorable figure of speech, such as “alone together.”

The words alone and together are apparently contradictory terms, so they combine to create an interesting new meaning.

Oxymorons are a useful literary device because they surprise the reader, making them think.

Oxymorons can also add an element of cleverness or humor to your story or essay, because it's often funny to see such a stark contrast between two words.

Here are some common examples of oxymorons: 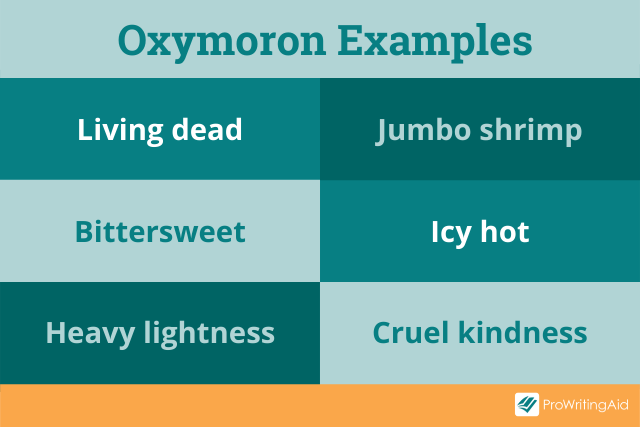 What’s the Difference Between a Paradox and an Oxymoron?

Both paradoxes and oxymorons refer to things that contradict themselves, so when you encounter a self-contradictory statement or phrase, you might be wondering if it is a paradox or an oxymoron.

The key difference is that these two terms describe different levels of self-contradiction.

Another key difference between the literary devices is the number of words. Usually, an oxymoron is a short phrase that consists of two or three words.

If it's an entire sentence, or multiple sentences, it would be more accurate to describe it as a paradox.

When you see a logically puzzling situation or statement, you should call that a paradox.

When you see two words that have opposite meanings, you should call that an oxymoron.

Let's take a look at some examples of how these terms can be used in everyday situations.

Here are some examples of the word paradox used in English publications and news sources:

"Having spent decades trying to detect the use of performance-enhancing drugs, officials may soon be confronted with the paradoxical problem of detecting their non-use. The reason for this paradox is the placebo effect: believing a treatment to be effective is sometimes enough to make it so."—The Economist

"The paradox is that at a time when one in seven people around the world are migrants, we are seeing an extraordinarily harsh response to migration in the developed world," said IOM director general Swing."—The Guardian

"College admission is ripe with choice, and applicants have a lot more control than they are led to believe. Therefore, students are wise to ignore the false narrative of impossible selectivity and instead focus on the greater conundrum—the paradox of having too many options."—Forbes

"That’s thanks to the great paradox of cryptocurrency: Its transactions are anonymous, but since every single one is public, stored on a blockchain that (by design) anyone can look at, they are like the broken stalks left by a thief fleeing through a wheat field—a bounty of data for experts in digital forensics, who can piece together identifying patterns."—Wired

Here are some examples of the word oxymoron used in English publications and news sources:

"In Maori the country's full name, Aotearoa, is a lovely kind of oxymoron: it translates as "the land of the long white cloud," as if clouds were properties of the earth, or served in some strange way to invoke it."—The Guardian

"Darek Urbaniak, the energy policy officer for WWF Europe, said: "Clean coal is an oxymoron the industry likes to use but it doesn't actually exist."—The Guardian

"Somewhere along the way to these times when nothing seems to work, “customer service” became an oxymoron. How many times have you listened to scratchy “hold” music, or have been asked to download an app instead of talking to a person, or have been warned that “your wait time is 35 minutes”—and then contemplated screaming?"—Washington Post

Conclusion on Paradox vs Oxymoron

Now you know the difference between an oxymoron and a paradox. Here's a quick recap: