Organisation vs. Organization: What’s the Difference? 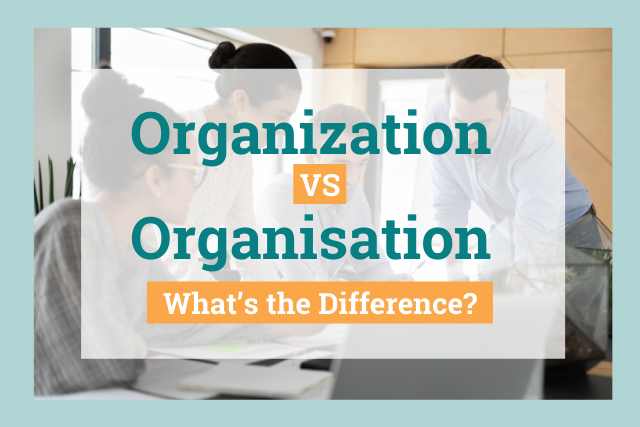 Many people don’t know whether they should write organisation and organization, since these are two commonly accepted spellings of the same word.

So when should you use each spelling?

The short answer is that it depends on whether you’re writing for a British audience or an American audience.

Organization is the only correct spelling of this word in American English, whilst both spellings are acceptable in British English.

In this article, we’ll teach you the difference between organization and organisation, and show you how to use each word correctly.

Organisation vs. Organization: Which Is Correct?

Organization and organisation are two forms of the same noun, which means “a group of people with a common purpose” or “a systematic arrangement or approach.” 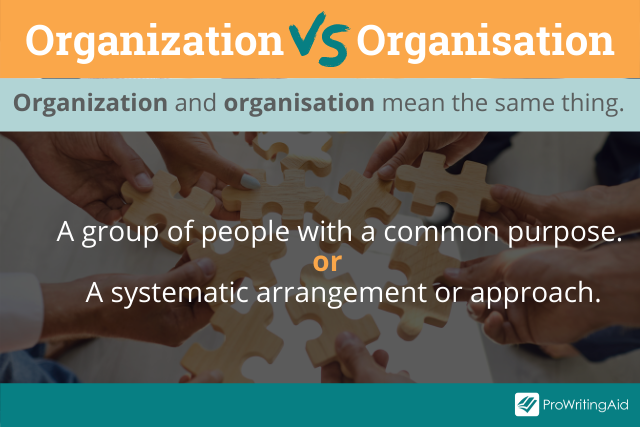 Changing the spelling doesn’t change the meaning of the word. The only difference between the two spellings is the geographical audience you’re writing for. 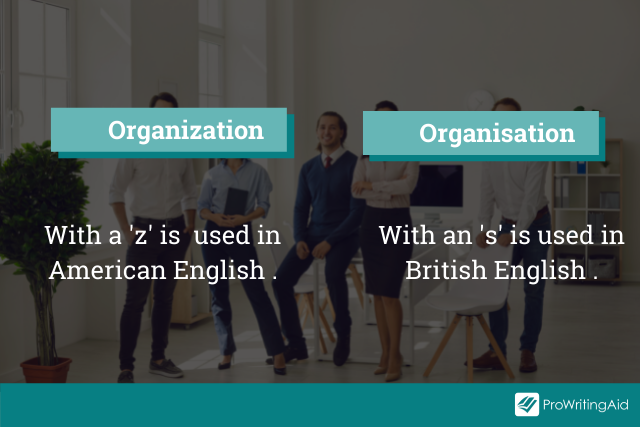 This tip is broadly applicable to British and American English because there are several other words that follow this pattern. Below are some other examples of words that are spelled with an s in British English and a z in American English.

Organization is the correct spelling in the United States. Whenever you’re writing for an American audience, you should spell this word with a z, not an s.

In American English, organization can mean either “a systematic arrangement or approach” or “a group of people with a common purpose.”

For example, you could say, “I’m joining a volunteer organization to tutor children who need help with math and physics.” In this case, organization means a group of people who have joined together to achieve the goal of educating children.

You could also say, “My mother was appalled at the organization of my desk, or rather, the lack thereof.” In this case, organization refers to the arrangement of the speaker’s desk.

Both organization and organisation are correct in the United Kingdom, as well as other parts of the world that speak British English, such as Australia and India. The word means the same thing regardless of how it’s spelled.

Whenever you’re in doubt about whether to use an s or a z in the word organisation, go with the z. This spelling is considered correct by every English-speaking audience.

Examples of Organization and Organisation (in American and British English)

Let’s look at some examples of organization and organisation from English literature around the world.

Here are some examples of the word organisation from British authors.

“We pigs are brainworkers. The whole management and organisation of this farm depend on us. Day and night we are watching over your welfare.”—Animal Farm by George Orwell

“Was it the happiest day of our lives? Probably not, if only because the truly happy days tend not to involve so much organisation, are rarely so public or so expensive. The happy ones sneak up, unexpected.”— Us by David Nicholls

“The Metropolitan Police Service is still, despite what people think, a working-class organisation and as such rejects totally the notion of an officer class. That is why every newly minted constable, regardless of their educational background, has to spend a two-year probationary period as an ordinary plod on the streets.”— Midnight Riot by Ben Aaronovitch

“Perhaps one day, all these conflicts will end, and it won’t be because of great statesmen or churches or organisations like this one. It’ll be because people have changed.”— When We Were Orphans by Kazuo Ishiguro

“She was adamant that any organisation that labelled one group of people as evil would eventually do the same to others. That to treat any one person as less than human was to cheapen the very substance of humanity.”— The Song Rising by Samantha Shannon

Here are some examples of the word organization used by authors around the world.

“NASA is an American non-military organization, and it owns the Hab. So while I’m in the Hab, American law applies. As soon as I step outside, I’m in international waters. Then when I get in the rover, I’m back to American law.”— The Martian by Andy Weir

“If chaos is a necessary step in the organization of one’s universe, then I was well on my way.”— Flipped by Wendelin Van Draanen

“There is no reason why good cannot triumph as often as evil. The triumph of anything is a matter of organization. If there are such things as angels, I hope that they are organized along the lines of the Mafia.”— The Sirens of Titan by Kurt Vonnegut

As a rule of thumb, remember that organization is used in American English, while both organization and organisation can be used in British English.