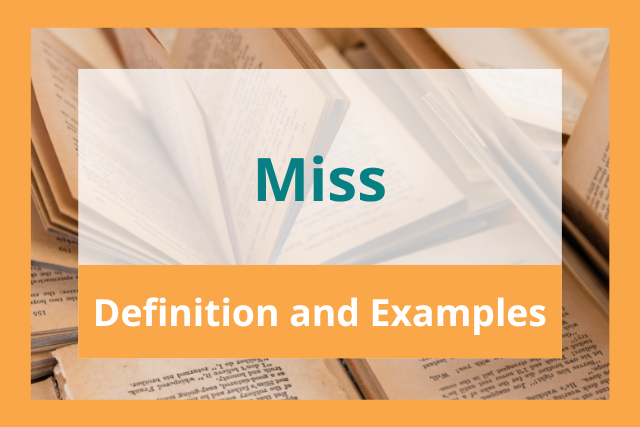 The English language is full of homonyms, which are words with different meanings that are pronounced and spelt the same. One of the most common homonyms is miss.

Miss belongs to different parts of speech, so it has many definitions.

In this article, we’ll explain the various functions and meanings of miss, and show you plenty of examples to illustrate the difference.

What Does Miss Mean?

Miss can be used as a verb and a noun. It has multiple meanings depending on its grammatical function. Let’s explore the different definitions. 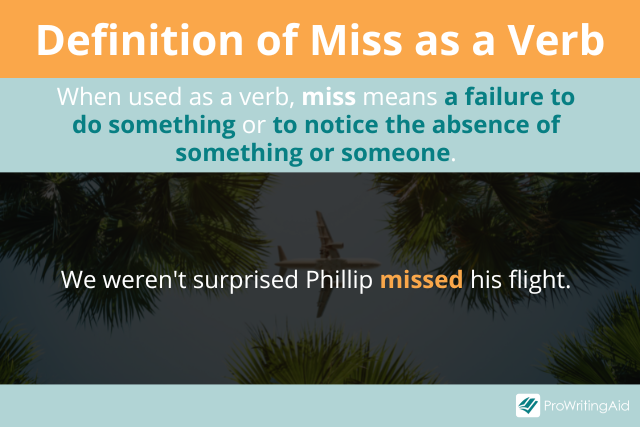 If you’re struggling to find the right verb form of miss to use in your writing, ProWritingAid can flag errors in your work and suggest the correct usage. Try it for free today!

When used as a common noun, miss refers to a failure. Let’s take a look at the specific meanings and how you can use them in a sentence. 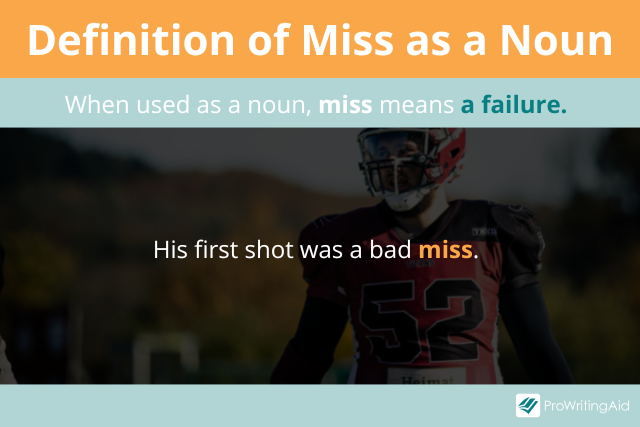 Miss is also a title used to refer to a young woman or an unmarried woman. Always capitalize Miss when it’s used as a prefix for a name or surname. As it’s not a shortened form, there’s no need to follow it with a period.

If you’re unsure of a young girl’s name, miss is a polite way to address her. You might have heard older people use miss, because it’s an old-fashioned term. We don’t usually capitalize miss when it’s used as a term of address.

Young children often use miss when addressing a female teacher too, whether she is married or not. This usage is common in the UK.

Have you ever watched Miss Congeniality? Miss is a title given to a woman who wins a beauty contest.

It’s usually combined with the name of the place she’s representing, but it can also preface a competition name, like Miss Universe or Miss America. 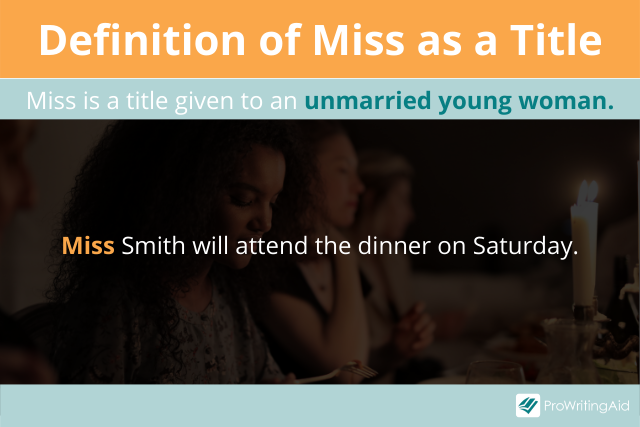 What Is a Miss?

A miss is a part of a British phrase that’s typically used in informal conversations. To give something a miss means to choose not to do something or to go somewhere.

What Is the Meaning of Misses?

Now that we’ve covered all the meanings of miss, what about misses?

Misses is the third-person singular form of miss. Normally, third person singular verbs end with an -S, however, miss follows a different rule. Instead, add -ES to the end to make the correct form.

Misses is also the plural of the noun miss. We use this if we’re referencing multiple failures.

As a plural noun, misses has an additional meaning. It refers to a range of standardized women’s clothing sizes, for example 6–20. You can also use misses to indicate the department where these garments are sold. This is a somewhat old-fashioned usage.

How to Use the Word Miss

How you use miss and its forms depends on the function you want it to carry out. You can use miss as a noun or a verb, as long as it makes sense within the sentence structure.

You should look at the context of a sentence to decide whether miss is the appropriate word choice.

You’ll have frequently used miss in your own conversations—it appears in many well-known idioms. Here are some of the most common:

When you miss a beat, you have hesitated. Alternatively, to not miss a beat means doing something without fault.

If you miss out on something, it means you’ve lost an opportunity.

To miss the boat means you’ve failed to take advantage of a good opportunity.

Examples of Miss in Sentences

Now that you know all the different miss meanings, here are some examples of it being used in a sentence.

How Do You Define Miss?

As we’ve discovered, miss is a word with lots of different meanings.

As a verb, it means to fail to hit something, to avoid something, to feel the absence of someone or something, and even to arrive late. As a noun, miss means a failure, and it’s also used as a title and term of address for young women, female teachers, and beauty queens.