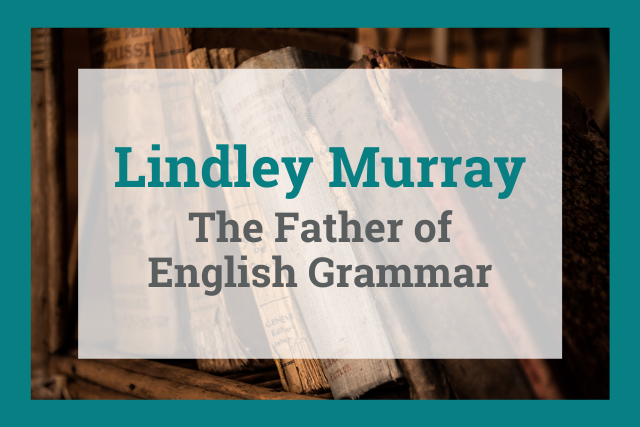 Who Was Lindley Murray?

Lindley Murray was a best-selling author during the first half of the 19th century.

In fact, Bryan Garner’s article “Remembering Lindley Murray, an inspirational lawyer-grammarian” quotes the Murray family’s biographer, Charles Monaghan, as saying Murray was “the largest selling author in the world” during that time!

He wrote English Grammar. From about 1800–1840, a grammar book was one of the most popular reads around. 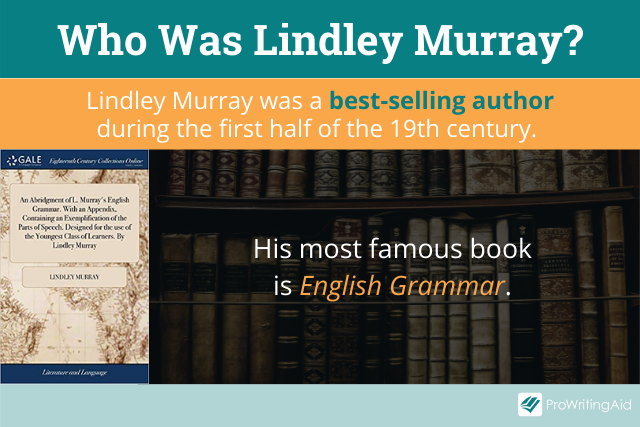 A Brief History of Lindley Murray

Lindley Murray was born in 1745 in Pennsylvania to Robert Murray (an Irish immigrant) and Mary Lindley (a Quaker). He was the oldest of twelve children.

The family moved to New York in 1753, where Robert was a successful merchant meaning that the family held significant social status.

In 1763, Lindley Murray started an apprenticeship with Benjamin Kissam, a New York lawyer.

Murray was joined some time later by another apprentice, John Jay, who he ended up mentoring. Jay would later become one author of The Federalist Papers and the first Chief Justice of the United States.

Murray married Hannah Dobson in 1767, and after a brief move to England, the two returned to New York where Murray established a successful, lucrative law practice.

Murray was a royalist sympathizer opposed to the American Revolution. He also experienced failing health.

As a result, in 1784 Murray and his wife left the United States for England and a climate more conducive to his health. They settled in a Quaker Community in York where Murray’s role as a grammarian began.

How Did Murray Become the Father of English Grammar?

In the 1790s, teachers from a new school for Quaker girls asked Murray to create a “grammar”—a grammar book—for their students. Murray obliged and published English Grammar in 1795, followed by an abridged version and then a set of exercises.

He published a second book, English Reader, in 1799, which included excerpts of prose and poetry from popular literature.

English Reader provided limited instruction on pronunciation and grammar, but its main purpose was to strengthen vocabulary and present stories of virtue.

By 1810, Murray’s collected works were used together as a curriculum.

Murray’s books weren’t just used in the classroom of the Quaker girls’ school. English Grammar had a far-reaching influence. According to Garner’s article: 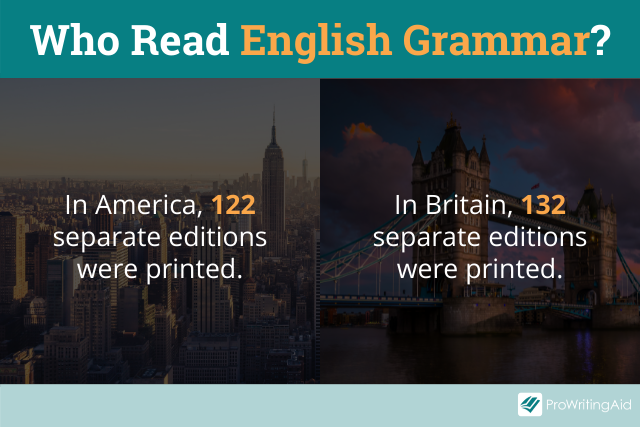 Garner writes that in “1800 to 1840, some 15.5 million copies of his literacy books sold in the United States and Great Britain… the most popular was his English Grammar.”

The popularity of this work earned him his title as "the father of English grammar."

The Influence of Lindley Murray’s Grammar

In her article “The Huge Presence of Lindley Murray,” Lyda Fens–De Zeeuw notes several 19th and 20th century authors who mention Murray in their work.

In Uncle Tom’s Cabin, Harriet Beecher Stowe describes a character’s manner of speaking as being in “free and easy defiance of Murray's Grammar.”

Edgar Allan Poe, Oscar Wilde, and James Joyce are others who referenced or showed the influence of Murray in their works.

Garner even states that “Young Abraham Lincoln is said to have read Murray by firelight.”

Not Everyone Loved Lindley Murray

Murray didn’t see himself as the author of his grammar book, but as a compiler–an important distinction.

On page five of the introduction to English Grammar he writes,

“In a work which professes itself to be a compilation, and which, from the nature and design of it, must consist chiefly of materials selected from the writings of others, it is scarcely necessary to apologize for the use which the Compiler has made of his predecessors’ labours; or for omitting to insert their names.”

In other words, Murray acknowledges that his work does not represent original concepts, but a collection of the efforts of many. This acknowledgment, at least to Murray, protected him from accusations of plagiarism.

Murray began naming sources in the fourth edition of English Grammar. That effort did not appease all predecessors though, especially Noah Webster who was never mentioned in the introduction.

This Noah Webster is the same Webster of dictionary fame. As a grammarian, Webster was surpassed by Murray’s popularity and therefore shifted his focus to dictionaries.

However, at the time that English Grammar was written, Webster accused Murray of plagiarism. He argued that Murray had used extensive portions of his (Webster’s) grammar work without giving him sufficient credit.

In the article “Grammar Nerd Heaven” in the New Yorker, Mary Norris quotes from one of Noah Webster’s letters. He, too, had been accused of plagiarism but claimed, “‘the materials of all English grammars are the same.’”

Though he likely didn’t do this on purpose, in accusing Murray, Webster created an an example of irony to include in his dictionary definition of the word!

His concern wasn’t just a surface-level preoccupation with rule-following.

“Words,” Murray says in his introduction, “are the signs of our ideas, and the medium by which we perceive the the sentiments of others, and communicate our own.”

Without knowing how to use words with propriety, we are in “hazard of misunderstanding others, and of being misunderstood ourselves.”

He suggested that the misuse of words, and the resulting misunderstandings were a cause of many conflicts existing among people.

Though his audience grew exponentially from the students in the girls’ Quaker school, Murray created the grammar for that young audience working to develop language proficiency.

Murray knew that grammar, with its specific rules and exceptions, requires detailed explanations. As too much detail could overwhelm and confuse young learners, he aimed for simplicity in his book’s instruction.

Each part is broken down into a series of subsections covering parts of speech, logic, idioms, figures of speech, and punctuation.

English Grammar is thorough and informative, but there is an easier way to edit your work: use ProWritingAid’s grammar checker!

You don’t have to page through it to check the rules; it knows the rules for you and will make sure you are using English “with propriety.”

Lindley Murray died in February 1826. For the last 16 years of his life, he was an invalid, unable to leave his house.

While he was known best for his contributions to the study of the English language during his lifetime, his legacy includes more than out-of-print grammar books.

According to Garner, Murray left a significant amount of money for an American fund.

As stated on the NYYM website, the money was to be used for liberating and educating slaves and their descendants; to “promote the civilization and instruction of the Indians of North America”; to buy and distribute books promoting Christianity; to assist the poor. The fund remains active.

Lindley Murray is also the name of a road and a restored one-room schoolhouse in Lebanon, Pennsylvania, and a now-closed public elementary school. 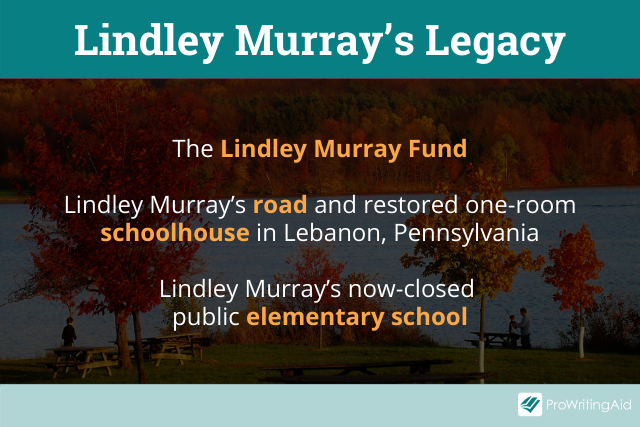 Lindley was not the only Murray to leave a legacy. The Murray Hill section of Manhattan was named after the Murray family.

Robert Murray, a successful merchant, and his family moved to the area in the mid-1700s, building and living on a large estate and farm called Inclenberg, which was destroyed by fire in 1835.

The Mary Lindley Murray School on 33rd Street in Manhattan is named after Murray’s mother.

Mary Murray and her daughters are honored in a plaque on Park Avenue and E. 37th Street for their efforts to thwart the Redcoats. In his article, “Meet the Murrays of Murray Hill,” Terry Golway writes,

“According to the legend the plaque celebrates, the formidable Mary Lindley Murray and her two daughters used whatever charms of personality they possessed to detain the redcoat high command while the remains of the American rebel army hightailed it out of New York in 1776, never to return until the Revolution was over.”

Do We Still Use Murray’s Grammar Rules?

Centuries have passed since “Murray’s English” was spoken and his English Grammar sat on the shelves of classrooms and in the hands of writers.

The English language, along with some of its rules (even those compiled by Murray) and conventions, has evolved.

However, if you look at the table of contents of English Grammar, you’ll recognize familiar terms and concepts.

Despite the evolution of the English language, you’ll see that Lindley Murray’s work still serves as a foundation for our modern-day grammar books.