John and I vs John and Me: Which Is Correct? 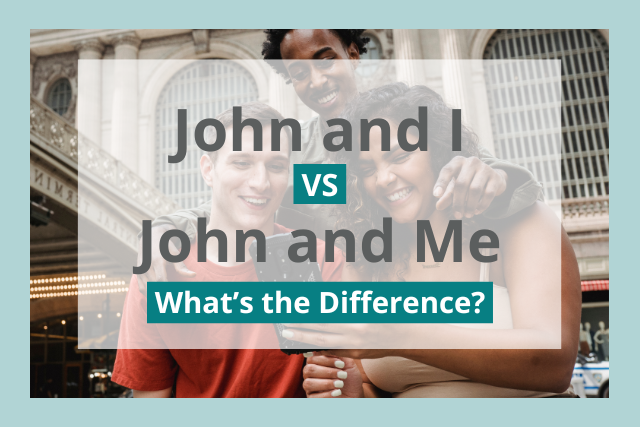 The English language is full of grammar rules that even native speakers forget.

One aspect that even English speakers find tricky is choosing the right pronouns, especially when to use “me” vs “I.”

We see this in the commonly misused phrases John and I vs John and me. But, which of these phrases is correct?

In this article, we’ll look at how to use the phrases John and I vs John and me correctly every time.

Is It John and I or John and Me?

Both phrases—John and I and John and me—are correct, but it depends on how you use them.

The subject in a sentence is the person or thing doing the verb. Let’s look at the following example:

Samira is the person doing the verb (enjoying), so she’s the subject of the sentence.

The object in a sentence receives the action of a verb. You can identify the object by finding the verb and then asking “what” or “whom.” In the above sentence, that's the birthday party.

Let’s look at the following sentence:

The object of the sentence is dancing, because that is “what” Samira loves (verb).

So, whether you use John and me vs John and I depends on whether the two of you are the subject or the object of the sentence.

When to Use John and I

You should use John and I when the two of you are the subject of the sentence or phrase. The phrase John and I will appear before the verb.

Let’s look at a few sentences to see how this looks in practice.

In all the sentences above, John and I are the subjects carrying out the action.

Now, let’s look at an example with the wrong pronoun:

This sentence is incorrect because “me” is an object pronoun, and it is incorrectly being used as a subject. 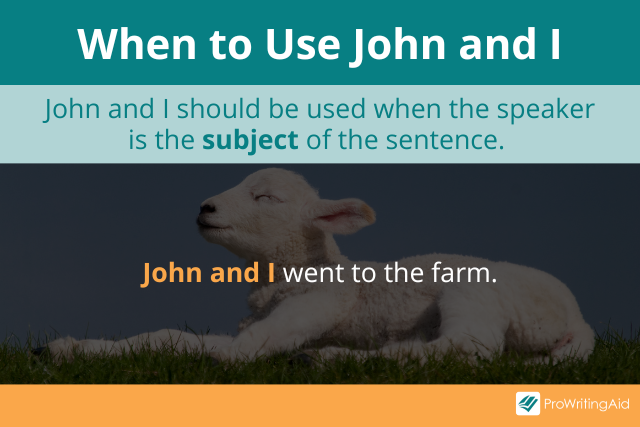 When to Use John and Me

You should use John and me when the two of you are the object in a phrase receiving the action. The phrase John and me usually comes at the end of a sentence.

Here are some sentences to show how John and me should be used:

In all the sentences above, John and me are the object of the sentence—they are receiving the action.

John and me and John and I are both grammatically correct, however, they should not be used interchangeably.

To decide which phrase is correct, remove “John and” from the sentence to see if the sentence still makes sense. For example:

If we remove “John and” the sentence becomes, “I went to the theme park.” That sentence makes sense, so you know John and I is the correct phrase.

Let’s look at how to decide if John and Me is being used correctly. 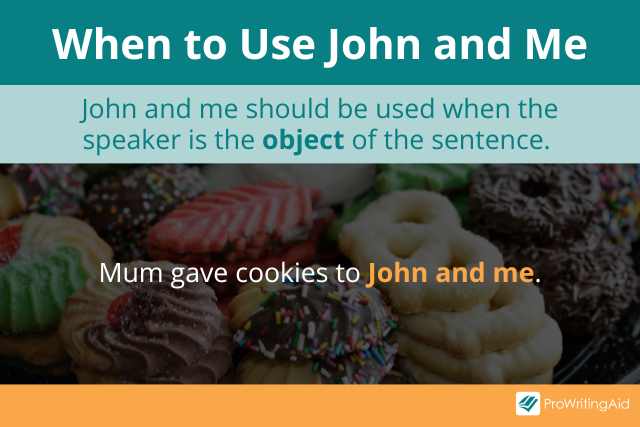 Is It Myself and John or John and I?

The phrase myself and John is incorrect and should not be used. Myself is a reflexive pronoun and should only be used when you’ve already referred to yourself in a sentence, as shown in the following sentence:

A rule of thumb to determine if we can use myself and John is to remove “and John.”

Let’s look at the following sentence:

If we remove “John and” from the sentence above, it becomes, “Myself drove to the mountains,” which is grammatically incorrect.

When to Use Myself and John

You should never use myself and John or John and myself. Both phrases are grammatically incorrect.

Conclusion: John and I vs John and Me

Even native English speakers struggle with pronouns. You might use the wrong pronoun or you might use too many, which will make your writing appear dull.

Use ProWritingAid’s grammar checker to show you where you might have used a wrong pronoun. It will also offer suggestions for the correct one. Then, use the Pronoun Checker to show you if you’re being too repetitive with your pronoun usage.