In Which vs Where: What’s the Difference (With Examples) 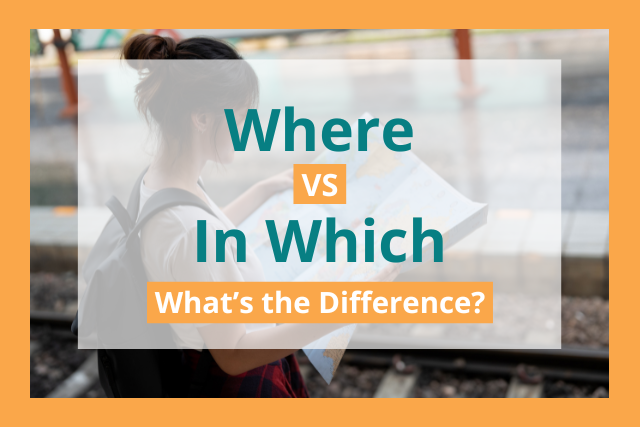 In which and where are often used interchangeably, but they are not synonymous.

Where is used to refer to a location or position, but it doesn’t offer any details about the place. In which also refers to a location but does it in a more precise manner by adding details.

In this article, we’ll look at the difference between in which and where and when to use each.

When to Use In Which

In which is a combination of the preposition “in” and the relative pronoun “which.”

When we use “which” to introduce a dependent clause (also called a relative clause), it becomes a relative pronoun. Other relative pronouns are “who,” “what,” and “when.” The use of “in” with “which” adds precision to the phrase.

Therefore, you can use in which to introduce a clause that provides precise information about the place or location that has been mentioned earlier in the sentence. For example:

As we can see above, in which is used to make the information that precedes the comma more precise.

Therefore, if you want to be more detailed with your descriptions, you should use in which. Furthermore, while in which refers to a location or place, it’s normally more applicable in formal writing.

In which can also be used when you want to avoid ending a sentence with a preposition. For example, instead of saying this:

Examples of In Which in Sentences

Here are some more examples of in which in sentences.

When to Use Where

Where is used to refer to a place or location. It's often used to ask a question about a specific place or to indicate the location of something. For example:

In these examples, the word where is used to refer directly to the place or location being discussed.

Unlike in which, where is normally used in informal settings or casual conversations. This is because the level of formality depends on the level of accuracy when referring to a physical location.

However, many grammar followers and writers consider this rule to be outdated and use where both in formal and informal situations.

Examples of Where in Sentences

Here are some more examples of where in a sentence.

What’s the Difference Between In Which vs Wherein?

In which and wherein mean the same thing; however, wherein is an archaic term.

If you used wherein in a sentence, it would look like this:

You can swap wherein with in which in the above sentence without changing the meaning.

From the examples above, we can see that the sentence with wherein comes off as more unnatural. This is because wherein is such an old-fashioned term. You won’t be penalized for using wherein as a substitute for in which, however, we recommend sticking to in which for a more natural flow.

Where vs In Which Conclusion

Where and in which are both used to refer to a location or position. In which is more precise and adds more details, while where does not. It is also more acceptable to use in which in formal writing and to use where in casual conversations.

Always be aware of which words are more suitable for formal use vs informal use so you can make the best decision in your writing.

Use ProWritingAid to give you suggestions based on formality level. It will highlight words and phrases that are either too formal or informal based on your settings.