In vs On: What’s the Difference? 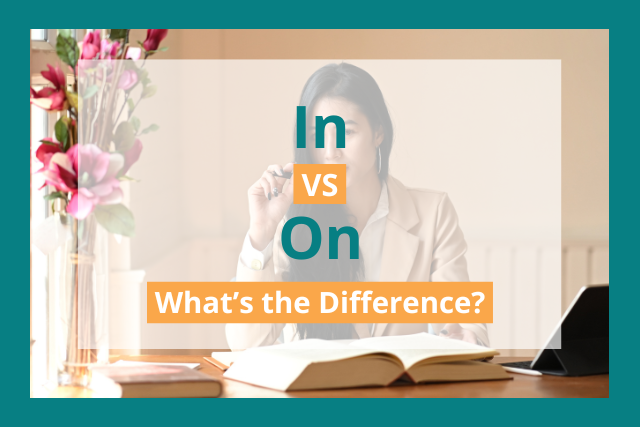 In and on are both prepositions of time and place, but they have slightly different definitions.

This article will cover the differences between in and on and provide examples of how to use each word in a sentence.

When to Use In vs On

In order to understand when to use the words in and on, we must first look at their definitions and which parts of speech they function as.

In Definition and Meaning

In can be a preposition, noun, adjective, or adverb.

When used as a noun, in refers to a position of power.

When used as an adjective, in refers to something that is in fashion.

When used as an adverb, it references something that is located indoors or is moving into a defined space. 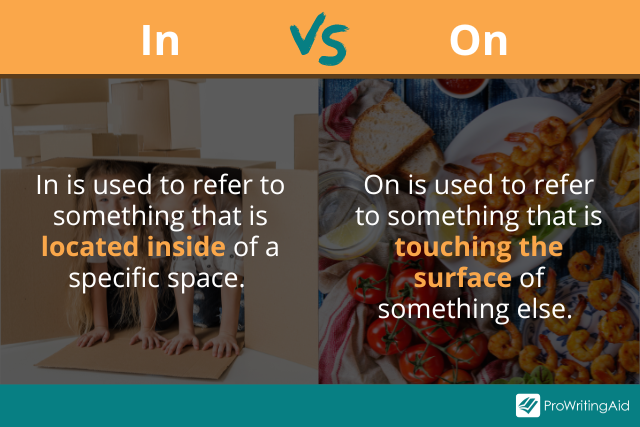 On Definition and Meaning

On can be a preposition, adjective, or adverb.

As with in, the most common usage of on is as a preposition. It is used to refer to something that is touching something else, either physically or metaphorically.

As an adjective, on means that something is active or operating.

As an adverb, on refers to a continuing action.

In vs On Examples in Sentences

The best way to learn the definition of a word is to see it used in context. Here are some more examples of the word in used in sentences.

Now, let’s look at how we can use the word on in sentences.

In vs On Exceptions to the Rule

The English language is full of exceptions to the rule, and in and on are no different. Even native speakers struggle with some of the following rules, so don’t worry if you don’t get it right the first time!

In vs On with Transportation

The prepositions in and on are both used in relation to transportation, but they are not synonymous.

You should use the preposition in when referring to personal transport like a car. For example:

But you should use the preposition on when referring to public transport. For example:

In vs On with Dates

In can reference a month, year, or unspecified date, while on should only refer to a specific date or day. Let’s look at the difference between these two prepositions using some examples.

In vs On Conclusion

If you’re still worried about mixing up the words in and on, then why not let a grammar checker do the hard work for you?

ProWritingAid will detect when you use the wrong word and provide the correct suggestion right on your screen. In one click, you can correct your writing.