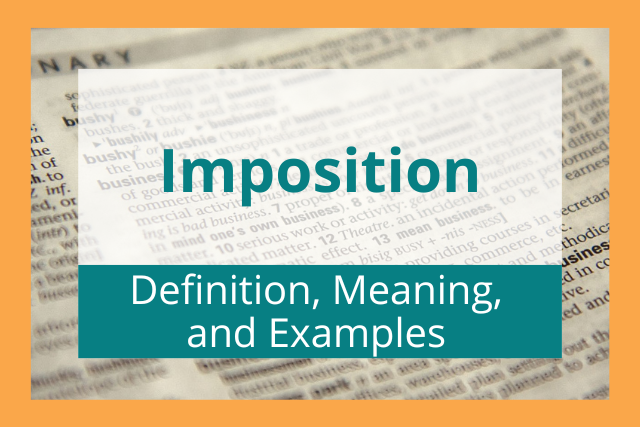 So, what does this word mean, and how do you use it in a sentence?

Imposition is a noun that describes an unwanted burden.

This article will explain the meaning of imposition in more detail and show you examples of how to use this word in writing.

Imposition (noun) means “an unwanted burden that is forced on someone.”

The verb form of imposition is to impose, which means “to force an unwanted burden onto someone.” You can think of imposition as another word for the act of imposing. 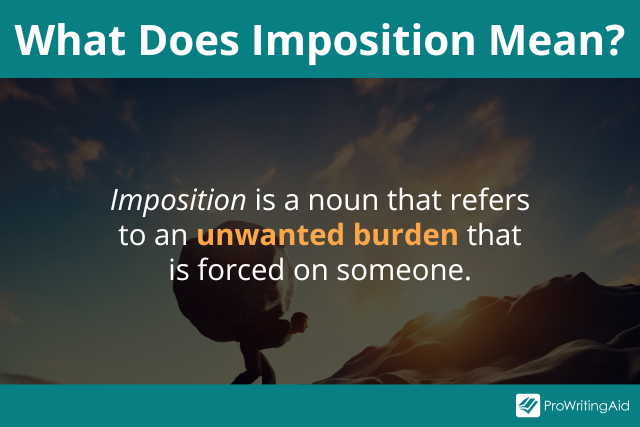 Common synonyms for imposition include burden, duty, and encumbrance.

We use the word imposition to describe an inconvenience or encumbrance.

Here are some example sentences that include imposition:

In some cases, imposition can refer to the setting of a new law by the government, such as a tax or levy. For example, if the president signs a law requiring everyone to pay a new tax, that process is referred to as the imposition of the new tax.

Here are some example sentences that use the governmental meaning of imposition:

How to Use Imposition in a Sentence

Once you know what imposition means, you can use it in a sentence with the same grammar rules you would apply to any other noun.

It’s common to say that something is an imposition, or that multiple things are impositions.

In the singular form, imposition requires a determiner, which is usually an. For example, you would say, “My roommate’s loudness is an imposition because I need to study.”

In the plural form, impositions with an -s can be used to describe multiple burdens or encumbrances. For example, you would say, “My houseguests are impositions on the health of my marriage.” 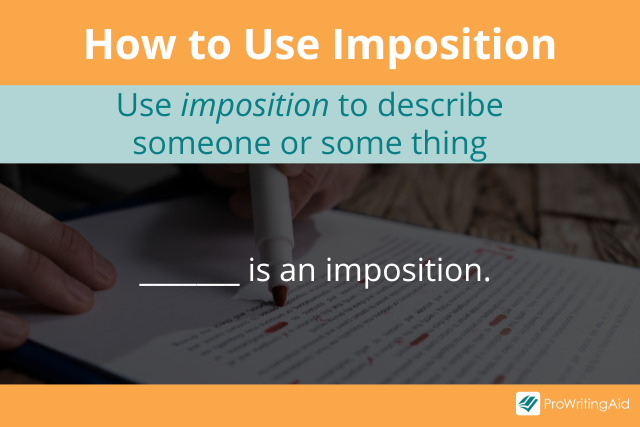 If you’re not sure you’re using imposition correctly, you can always run your work through ProWritingAid, which will highlight incorrect word usage and help you fix it with a single click.

Examples of Imposition in Sentences

The best way to learn a word is by seeing it in action. Let’s look at some examples of imposition in sentences from English literature.

“He had the courage to admit that a terrible wrong had been done to our country and people through the imposition of the system of apartheid.”—Nelson Mandela, Long Walk to Freedom

“‘Of course,’ Bailey says, relieved that he is not an imposition.”—Erin Morgenstern, The Night Circus

“Reputation is an idle and most false imposition; oft got without merit, and lost without deserving.”—William Shakespeare, Othello

“Good deeds are impositions; that’s why I categorically abhor them.”—Fernando Pessoa, The Book of Disquiet

“The very thought of such people’s intolerant worldview, their inflated sense of their own superiority, and their callous imposition of their own beliefs on others was enough to fill her with rage.”—Haruki Murakami, 1Q84

“They disregard the quality of immediate experience, and base their motivation instead on the strongly rooted cultural stereotype of what work is supposed to be like. They think of it as an imposition, a constraint, an infringement of their freedom, and therefore something to be avoided as much as possible.”—Mihaly Csikszentmihalyi, Flow: The Psychology of Optimal Experience

There you have it—a complete guide to the definition and meaning of the word imposition! Just remember that it’s the noun form of the verb impose, and you’ll be good to go.