ProWritingAid
ProWritingAid
Blog The Writing Process How to Create Fictional, Fantasy and Sci-Fi Cultures (with Ideas and Examples)

How to Create Fictional, Fantasy and Sci-Fi Cultures (with Ideas and Examples) 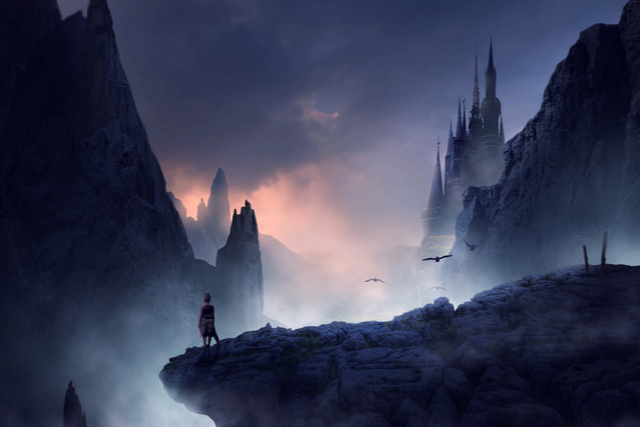 The Problem with Science Fiction

There’s a problem in science fiction and fantasy that people aren’t talking about. It has to do with fantasy cultures. Let me paint you a picture that might sound familiar.

These humans worship different gods but are still polytheistic. They are heteronormative, patriarchal, and monogamous.

The Dwarves hate both the Elves and the Humans. They are short and bearded. They fight with swords and maybe some axes. They have a completely different pantheon of gods, but they are still heteronormative, patriarchal, and monogamous.

There is an alien race that has blue skin and tentacles. They fight with laser guns, and they fly spaceships. They worship an asteroid god, have ancient sacred texts, and nuclear families. They are at war with another alien race.

This race is green and has three eyes but no tentacles. They also fly spaceships that are nearly identical and fight with laser guns. They worship goddesses instead of gods. They marry in their early adult years and procreate normally.

These cultures are mostly homogeneous, or consist of elements that are very much alike. But when many plots involve an element of cultural clash and these cultures aren’t all that different, the story is no longer believable.

It’s also insulting to the diversity of cultures that exist in our real world. Art mimics life, but too many fantasy and sci-fi cultures sound like a place only some of us could easily fit in. There is so much more variety in life that we can mimic in our world-building.

It starts with a basic understanding of culture.

Every social science has a slightly different definition of culture, but I find the anthropology definition to be the most comprehensive.

The most widely accepted definition of culture within the field of anthropology comes from Bates and Plogg in 1990. It reads as follows (emphasis is my own):

The system of shared beliefs, values, customs, behaviours, and artifacts that the members of society use to cope with their world and with one another, and that are transmitted from generation to generation through learning.

That’s a mouthful. Let’s break it down.

The other important element of culture is that these values and customs are passed onto new generations. They are either taught explicitly or learned just by existing within that culture.

There are also sub-cultures, or cultures within cultures. For example, the culture I most identify with is American South, specifically white southerners. But I am part of many sub-cultures such as the queer community and the writing community.

Each of these sub-cultures have their own elements, their own values, their own faux-pas that you learn through being a part of the community.

The Cultural Iceberg and the Problem with Fictional Cultures

In 1976, American anthropologist Edward T. Hall published a book called Beyond Culture. In it, he proposed the Iceberg Model for thinking about culture and understanding it on a deeper level.

He proposed that culture consists of conscious, or surface, elements and unconscious, or deep, elements. The deep, unseen elements are what dictate everything we can see about a culture.

The surface elements consist of things like language, dress, family structure, art, cuisine, religious rituals, holidays, and various artifacts. But at the heart of each culture are unseen values. These can be divided into a few basic categories:

This leads to elements like manners and acceptable behaviors, family values, concepts of justice, beliefs about the supernatural, gender roles, concepts of beauty and humor, and even things like personal space and body language.

What are the core values of a culture? How do they view authority? How do they treat children and the elderly? What biases do they hold?

These beliefs and values create everything that we can see as an outsider looking in. The examples listed above and in the picture below are by no means exhaustive. You can find many Cultural Icebergs online that use different wording or examples for each part of the iceberg. 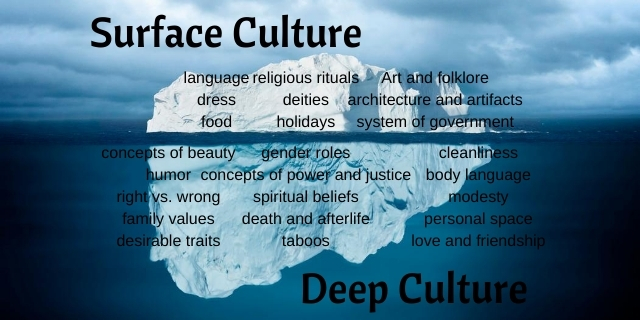 The problem with many fictional cultures is the world-building focuses on just the tip of the iceberg, literally! And without dissecting the deep culture, this leads to homogeneous fictional populations.

Where Do I Start?

Now that you are convinced that your fictional cultures need more nuance, where do you start? The answer is one word: geography!

Humans are at the mercy of our environment. We learn to exact some measure of control over our environment, but those measures depend on where we are and what resources are available.

Where does your fictional culture live? What food and resources are available? How do they get their food? What natural phenomena will they witness? What is the climate?

Let’s take a look at the Sami of northern Scandinavia and Russia. Their environment is very cold and snowy. They have access to ice fishing and big furry animals. Most importantly, they are surrounded by reindeer.

Reindeer are vital to the Sami culture. They adapted to their environment by domesticating and breeding reindeer. They eat reindeer, make clothes from their fur, breed them, and use them for transportation.

This aspect of their environment led to the development of around 1,000 different words for reindeer! There is a festival that celebrates the migration of reindeer.

The traditional religious beliefs of the Sami relate to their environment, too. They live in some of the harshest environments in the world. There are interesting landforms that became sacred spaces. They believe in animal spirits and certain deities that relate to the world around them.

So, take a detailed look at the environment and geography of your fictional culture. What cultural elements make sense? I’m not going to value water in a rainforest the same way I do in a desert. I’m not going to worship a volcano goddess if I’ve never seen a volcano.

How to Dig Deep

Once you’ve nailed down the elements based on geography, you can start looking at the deep culture elements. Here are some of my favorite cultural elements to play with when I create fictional cultures:

Look at the government of your cultures. Are they all monarchies or chiefdoms where power is inherited? Change it up. Leaders can compete for power through brute strength like in Black Panther. Rulers might be the most intelligent or wisest person living. Perhaps there is a council of equals that rule. How is power transferred? 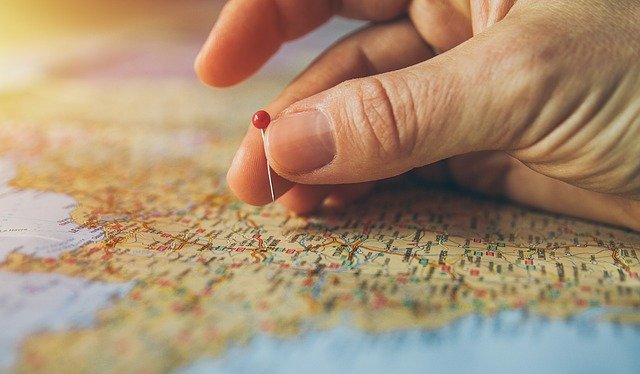 You should also look at the economy. Do you have a currency or is there bartering? What are the commodities in your culture versus what is plentiful? The Ancient Maya valued jade over gold. The Romans valued salt.

How do individuals react to one another? Among the Sambia of Papua New Guinea, genders were so divided that males and females walked on different paths in the village. Among the Vikings, women were considered better at money and more level-headed.

What is taboo? How are people who don’t “fit in” dealt with? Consider how different groups within a culture view things differently: women, men, young, old, single, married.

Stories without conflict are boring. And cultural clashes are a great way to spice up your novel. There are obvious conflicts, such as war over resources or opposing beliefs. But there is so much more you can do.

A culture loses its home and assimilates into another culture. How do they find belonging while maintaining the important aspects of their culture? How do they influence the new culture?

A character is stuck in a new culture, whether by choice, accident, or force. So much character growth can happen by learning that your own cultural values are not the “one right way.”

Don’t just use the few cultures you learned about in grade school as a basis of all of your fictional populations. Sure, you know the Romans, but what do you really know about the Celts and the Picts that they fought?

Find an obscure tribe in the Pacific, the Amazon, or Africa and pull interesting elements. For example, the men in the Bodi tribe of Ethiopia compete every year to become the fattest. The winner is lauded as a hero for the rest of his life.

Play with concepts of gender. Third genders have existed in a myriad of cultures throughout history. Or have a binary where the women are the authority figures and the breadwinners and men do all the domestic work. Instead of a king with a harem, have a queen with her own harem.

Creating diverse, unique fictional cultures requires us to check our own cultural biases. Not only do our stories become more interesting and inclusive, but we learn to interact with the world around us with more compassion and kindness. And hopefully, our books will encourage our readers to do the same.

Do you have a favorite fictional culture? Drop a comment and tell us all about it.

Want our best tips on creating new cultures, species and gods for your world, all in one place? Download this free ebook now: