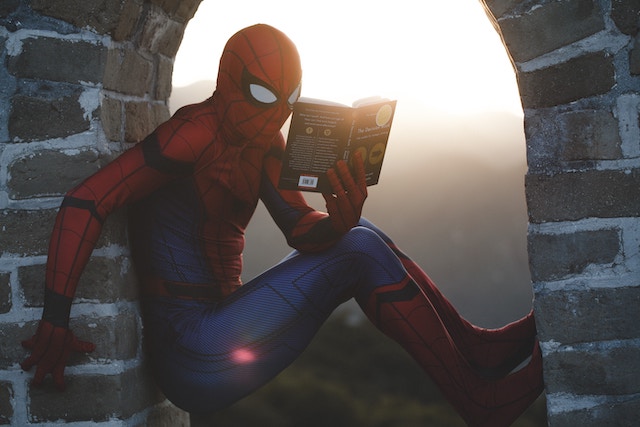 So. Before starting, we need to get one thing out of the way…

This post will not involve any spoilers for Avengers Endgame. I promise.

Avengers: Endgame has finally arrived in theaters, marking the culmination of over a decade of work on behalf of Marvel Studios. Bravo, Marvel. It was another great one!

Whether you're a screenwriter or a prose writer, building a fictional universe is a desirable skill. So the question is, how does one do it?

Today, let's learn from the masters at Marvel Studios. Love them or hate them, the MCU (Marvel Cinematic Universe) is one of the most popular fictional universes of all time. In this post, we'll analyze four ways Marvel made it happen.

There's a reason foreshadowing is one of the most commonly used literary devices around. When big events happen in a book or movie, audiences expect a feeling of inevitability (without spilling into predictability). That requires intricate planning.

For an example from the MCU, consider the previous Avengers film, Infinity War. It was the culmination of a decade of planning and forethought.

Almost every major character from the studio's past appeared in the film, if not played a pivotal role in the proceedings. Furthermore, each Infinity Stone that Thanos pursued appeared in at least one Marvel film before appearing in this one.

But planning ahead in the MCU goes beyond this step. For example, consider how characters are introduced within this fictional universe: They often appear in supporting roles before taking the lead.

For example, Nick Fury, director of S.H.I.E.L.D. and architect of the Avengers Initiative, first appeared in an after-credit sequence in 2008's Iron Man.

Or consider King T'Challa, a.k.a. Black Panther, who appeared in Captain America: Civil War before leading his own film. Appearances like these, whether major or minor, give fictional universes a sense of sprawling scale. The borders of each siloed story overlap with others, forming the fabric of the fictional universe.

For writers, here's the takeaway: look ahead. Have a plan not just for what happens now, but what happens 10 stories from now. Doing so creates a thriving fictional universe.

2. Be Willing to Experiment

When Marvel Studios announced a Guardians of the Galaxy film, people were skeptical. Even enfranchised Marvel Comics fans thought it an odd choice.

And for those who hadn't heard of the comics before, a racoon voiced by Bradley Cooper, a tree voiced by Vin Diesel, and a crew led by Andy from Parks and Recreation sounded…odd.

To be fair, the movie is pretty odd. But that quirkiness, humor, and cast chemistry led to an unlikely hit. The Guardians have been a huge part of the MCU ever since.

This anecdote shows the importance of experimentation. Imagine if Marvel chose to play it safe and instead adapted a more famous character, such as The Punisher, for their next big project. It probably would've been solid. But would it have the surprise and freshness of Guardians? I don't think so.

And it's not just experimentation in subject matter. Marvel Studios has done a fantastic job experimenting with structure, too. Consider Infinity War, for example.

Yet Thanos is the protagonist of Infinity War and the Avengers themselves are the antagonists. Thanos pushes the action of the story forward by seeking the Infinity Stones. The Avengers try to stop him from doing it.

Such risks and experimentation don't always work. For example, Antman is another lesser-known Marvel character who, likely due to the success of Guardians of the Galaxy, got his own film franchise. Though perfectly fine, his first two films haven't been among Marvel's best.

Not every experiment succeeds. But experimentation is an essential step toward keeping your fictional universe fresh.

3. Borrow from Other Genres

Some of the best stories present a familiar formula but then deviate in new and interesting ways. Marvel Studios has gotten really good at that, especially in regard to genre.

Each Marvel film, at its core, is a superhero movie. That's obvious. Yet as they've grown and developed, Marvel films have often crossed into other genres.

Spider-Man: Homecoming is a teenage coming-of-age story. Guardians of the Galaxy is a 70s sci-fi pastiche crossed with a comedy. Ant-Man is a heist film. Black Panther is a political thriller.

Add genre tropes to your fictional universe and see how they form something new.

With a sprawling fictional world, it's sometimes tempting to focus too much on the big picture. But, as Marvel Studios has shown, it's important to keep the focus on characters.

Follow the arc of Tony Stark, for example. Each film he appears in advances his character from the one previous. Check out my basic timeline:

As you can see, each film builds on events from the previous ones while setting up the events of the future. And they're all based on character!

Summing It All Up

So, in closing, remember to do the following with your fictional universe: plan ahead, experiment, borrow from other genres, and focus on character. Now get writing!