Home In vs Hone In: Which Is Correct? 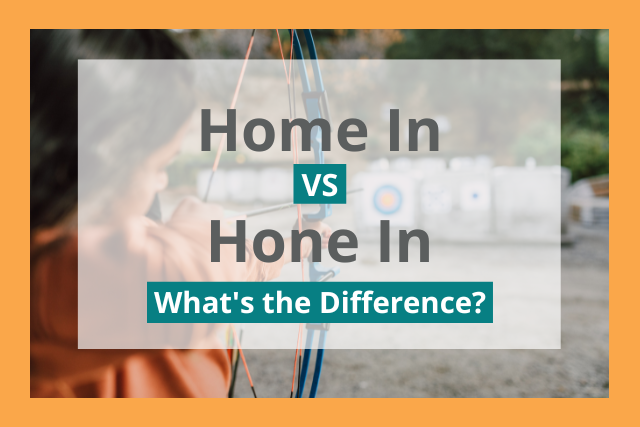 Do missiles home in or hone in on a target? Home in and hone in are commonly confused phrases which both refer to narrowing in on a particular topic.

In this article, we’ll discuss the differences between both phrases, their meanings, and their correct usage.

Difference Between Home In vs Hone In

Home was originally used as a noun. However, over time the verb home was used in a more technological context to refer to the act of moving or being aimed toward a destination with great accuracy.

For example, an arrow moving towards its target homes in to its destination.

Examples of sentences using home in include:

So what about hone in? Well, hone is a verb that means to sharpen a knife or improve a skill. However, it’s the usage and move from home as a noun to a verb that gave rise to the phrase hone in.

Hone in means to advance toward a goal and is also often used alongside on, resulting in hone in on. The phrase also means to focus attention. However, many people think this phrase is a mistake, and a case of simply using the wrong verb, since hone means “to sharpen.”

According to Merriam Webster’s dictionary, hone in or home can be used, but home in does a better job of conveying your idea. 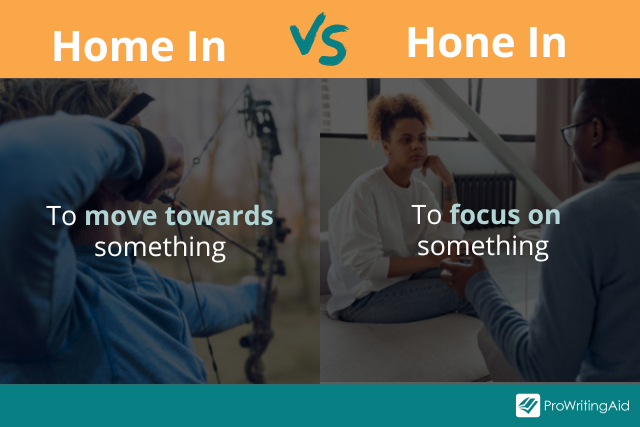 Hone In Definition and Meaning

The verb hone means “to sharpen or smooth with a whetstone” and “to make more accurate, intense, or effective.”

Hone in is now seen as an alternative to home in, although language enthusiasts are not so quick to accept it. So, if you are around any English Language lovers, you may want to refrain from using it.

Hone in is less commonly used in professional writing, so we recommend you defer to your company’s style guide on whether or not to use it.

Hone In or Hone In On?

Both hone in and hone in on are as phrasal verbs that are used figuratively to mean to target something or someone.

However, while some people use these phrases as an alternative to home in and home in on, it’s not considered as standard usage.

If you’re not sure whether to use hone in versus home in, you can avoid them all together by writing zero in.

To zero in means to direct all of your attention on something, or to aim something directly at something else. For example, “He raised the binoculars and zeroed in on an eleventh-floor room.”

You can also use ProWritingAid if you’re uncertain which word or phrase to use. It will highlight possible misused expressions and suggest alternatives for you to choose from.

Examples of Hone In Used in Sentences

Honing In or Homing In?

Conclusion on Home In vs Hone In

Home in and hone in are two variants of a phrasal verb that means to narrow one’s focus or to grow nearer to a conclusion.

However, although hone in on is a common phrase, many people think is an error for home in on.

Both phrases are proof of how fluid language can be and that meanings and usage can change.