His: Definition and Meaning (with Examples) 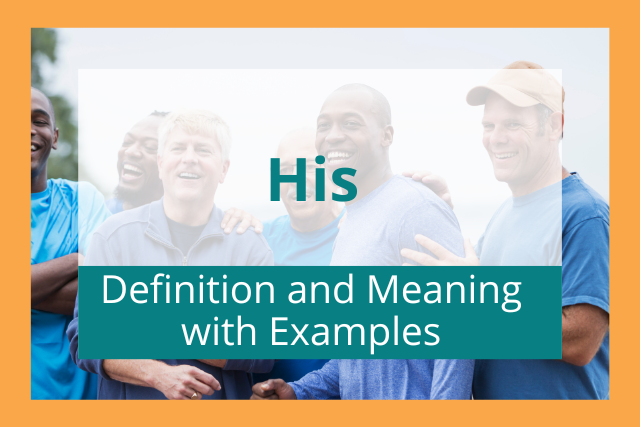 English has quite a few pronouns, so it’s important to understand how to use them correctly.

His is a unique pronoun because it functions as both the possessive pronoun and possessive adjective form of “he.”

Let’s take a closer look at the definitions and meaning of his, and how to use this word in sentences.

The word his has two closely related definitions, one for each part of speech. First, it means, “relating to him as a possessor.” In other words, it’s the possessive form of he and him and shows that something belongs to a male.

This part of speech is a determiner, which is a word that references a noun. Determiners that relate to a specific number and/or gender are called possessive adjectives.

But his can also be a possessive pronoun, which means it can stand in for a noun without another noun following it. It means “something that belongs to him.”

Here’s what his looks like as a possessive pronoun: 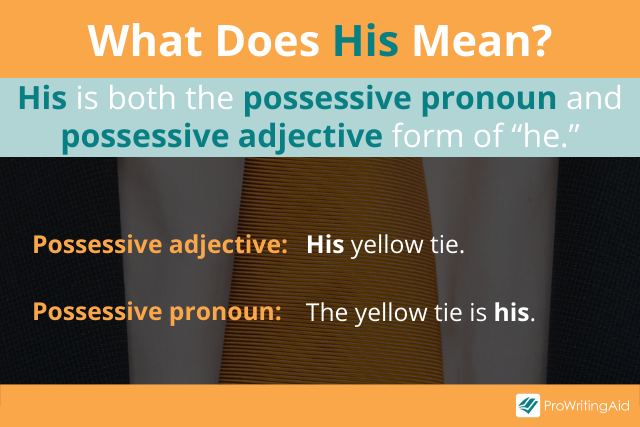 The word origin of his dates back to Middle English, before the twelfth century. It comes from the word hē, which later became “he” without the pronunciation line—called a macron—above the E.

His is an interesting possessive form because it’s the only one that functions as both a possessive pronoun and possessive adjective.

For example, in the first-person, there are “my” and “mine.” The third-person singular female forms are “her” and “hers.”

But the word his is the same in both uses. We can say “his dog” or “the dog is his.”

His doesn’t have to refer to just a human male, either. It can also refer to a male animal, if you prefer not to use “it/its” for a creature.

For example, we could say, “That is his dog bed.” Or we could leave off the following noun and switch to the possessive pronoun: “The dog bed is his.”

Examples of His in Sentences

The best way to understand how to use a word is to read examples. Let’s take a look at some more examples of the word his, this time from famous books.

First, here are some examples of his as a possessive adjective.

“I wanted you to see what real courage is, instead of getting the idea that courage is a man with a gun in his hand. It’s when you know you’re licked before you begin but you begin anyway and you see it through no matter what. You rarely win, but sometimes you do.”—Harper Lee, To Kill a Mockingbird

“As Gregor Samsa awoke one morning from uneasy dreams he found himself transformed in his bed into an enormous insect.”—Franz Kafka, The Metamorphosis

“A man, after he has brushed off the dust and chips of his life, will have left only the hard, clean questions: Was it good or was it evil? Have I done well—or ill?”—John Steinbeck, East of Eden

Now, we can look at a couple of examples of his as a possessive pronoun.

“He’s more myself than I am. Whatever our souls are made of, his and mine are the same.”—Emily Brontë, Wuthering Heights

“Phaedra keeps saying she’s being selfish. That she hates herself for it, but she does it anyway. She can’t deny herself what she wants, even if it brings about her downfall and his.”—Cora Cormack, Losing It 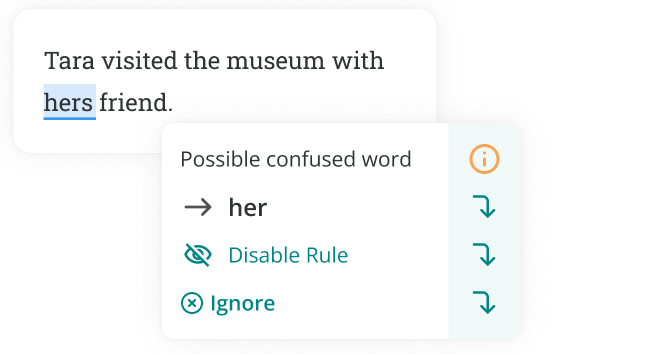 Now you’ve learned everything there is to know about his. If you still struggle with pronouns, run your writing through our free grammar checker. We’ll check your pronoun usage so whatever you write is error-free.