The Grammar Guide Spelling What is the difference between 'simular' and 'similar'?

What is the difference between 'simular' and 'similar'? 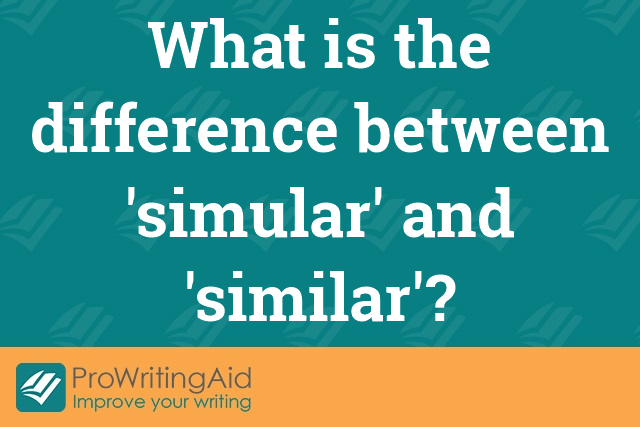 The words simular and similar are often confused because of their similar spelling. We'll help you to understand the difference.

Similar means having traits or characteristics in common; alike, comparable when used as an adjective.

Simular means false; specious; counterfeit when used as an adjective.

A good way to remember the difference is SimUlar is something that is simUlated.

Out of the two words, 'similar' is the most common. It appears about 11355 times more frequently than 'simular'.

When using ProWritingAid, if you use 'simular' instead of 'similar', you'll see a suggestion pop-up, like this: 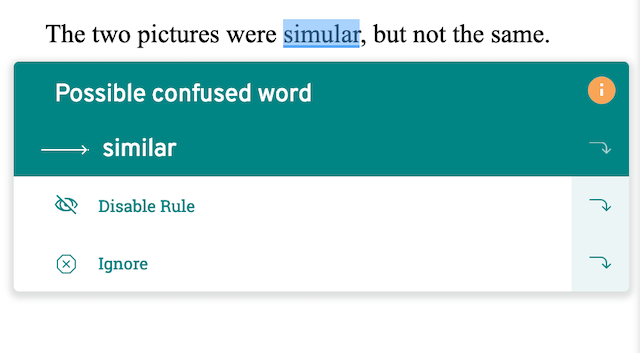 If you need a refresher on how the two are different, you can click on the orange 'i' symbol to read more about the suggestion: 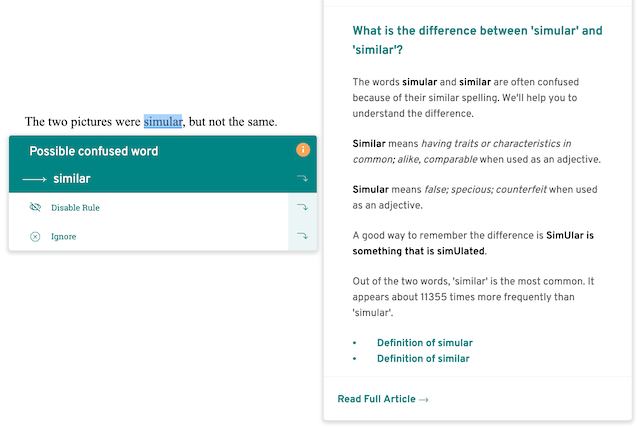 It's easy to confuse words with similar spellings, like similar and simular. But these words have very different meanings.

Similar is an adjective that means "alike, having traits in common."

**Simular can be an adjective that means "fake, simulated, or counterfeit." It can also be a noun that means "a person or thing that simulates, pretender."

The correct expression is 'similar to those of'. These phrases are often confused because they are easy to mistype.

The correct expression is 'similar to that of'. These phrases are often confused because they appear similar.

The right phrase is 'are similar to those'. These phrases are often confused because they look similar.

The correct phrase is 'very similar to those'. These phrases are often confused because they are easy to mistype.

Is the phrase 'is similar to the' or 'is simular to the'?

The correct phrase is 'is similar to the'. These phrases are often confused because they are easy to mistype.

Some synonyms of similar are: synonymous , same, replaceable , twin, like.

Some synonyms of simular are: pretender, simulated, fake, counterfeit, false.

Examples of similar in a sentence

As soon as he had done so, he remembered dumping a couple of similar e-mails two days earlier.
- In the night room: a novel by Peter Straub

The names were too similar for there to be any mistake.
- Secret Weapon Spouse by B. J. Daniels

The two girls beside her had on similar boots.
- Villain by Shūichi Yoshida; Philip Gabriel

Well, this is similar to when he taps your knee with a rubber mallet.
- The Hound of Rowan by Henry H. Neff

A. They were similar cuts, rectangular in shape.
- The Singing of the Dead by Dana Stabenow

Spelling
It's vs Its: When Should You Use Them

Spelling
What is the difference between 'pray' and 'prey'?