What is the difference between 'later' and 'latter'? 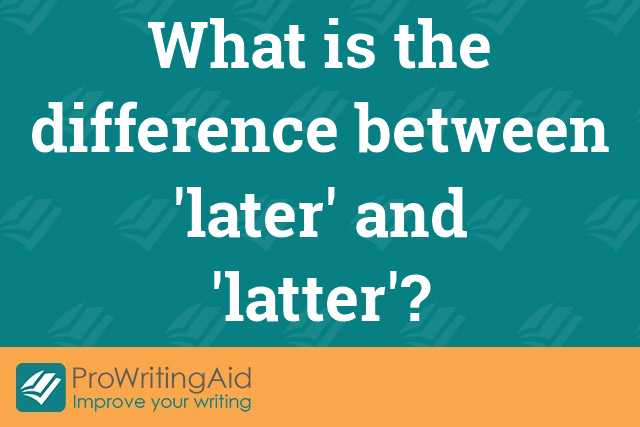 The words later and latter are often confused because they are easy to mistype. Do you know the difference?

Later means at a time subsequent to the current time when used as an adverb.

Latter means relating to the end or most recent when used as an adjective.

A good way to remember the difference is The rhyme: see you LATER, alligator.

Out of the two words, 'later' is the most common. It appears about two times more frequently than 'latter'.

Later and latter are easy to confuse because they have similar spellings and even similar meanings. However, they are different parts of speech with subtle differences in their meanings. This article will cover the differences.

Later is usually an adverb. It means at a time subsequent to the current time, subsequently, afterward. Occasionally, it can be used as an adjective to mean the opposite of early (the later movie).

Latter is an adjective. It means belonging to a subsequent or later time, more recent. It is the opposite of former.

The phrase is 'see you later.' These words are often confused because of similar spellings and meanings.

The expression is 'former or latter.' These words are easily confused because they are spelled similarly.

Do we say 'the later days' or 'the latter days'?

We say 'the latter days.' These words are easy to confuse because they have similar spellings and meanings.

Definitions were adapted from Merriam-Webster.

Examples of later in a sentence

A click later, and the yellowish glow from a battery lantern pushed away the black.
- Touch of Darkness by C. T. Adams; Cathy Clamp

Dr. Nelson later said he was sorry, calling it another experiment.
- Beyond belief by Roy Johansen

Anything that you suppose or deduce can wait until later.
- Weighed in the balance by Anne Perry

Later, when I was the Troll-Scorcher, it was different.
- The Rise and Fall of a Dragonking by Lynn Abbey

I saw him again a few days later, and he was even worse.
- Grand Junction by Maurice G. Dantec

Examples of latter in a sentence

I couldn't understand the latter, so I pretended to more of the former than I felt.
- A Darkness in My Soul by Dean Koontz

The latter will hardly be difficult.”
- Weighed in the balance by Anne Perry

Henry preferred the latter.
- Beatrice and Virgil by Yann Martel

The latter smiled and entrusted his apprentices with the task of valuing the works.
- Once on a Moonless Night by Dai Sijie

Jack had banked on the latter.
- The Haunted Air by F. Paul Wilson