What is the difference between "bellow" and "below"? 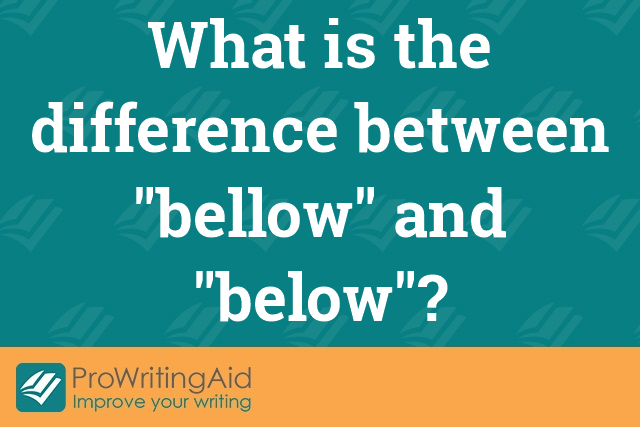 The words bellow and below are often confused because they are easy to mistype. We'll help you to understand the difference.

Below means lower in spatial position than when used as a preposition.

A bellow means the deep roar of a large animal, or any similar loud noise when used as a noun.

Bellow is also used as a verb. It means to make a loud, deep, hollow noise like the roar of an angry bull.

Below is like be-low. Below quite literately means to be low.

Out of the two words, 'below' is the most common. It appears about 294 times more frequently than 'bellow'.

Here are some common expressions with bellow and below that people often confuse.

You should use 'let out a bellow'. These phrases are often confused because they look similar.

You should use 'a bellow of rage'. These phrases are often confused because of their similar spelling.

The correct expression is 'bellow like a bull'. These phrases are often confused because they have a similar spelling.

Some synonyms of bellow are: yowl, call, emit, shout, holler.

Some synonyms of below are: beneath, on a lower floor, infra, under, at a lower place.

Think you've got it sussed? Test your knowledge in our quiz!

Examples of bellow in a sentence

The queen rose up on her claws, venting a clacking bellow.
- Blood of the Fold by Terry Goodkind

The globe ruptured, and a bellow of pain like Romulus had never heard split the air.
- The Forgotten Legion by Ben Kane

He stepped to the door, opened it and leaned out to bellow, “GANTRY!” for the mate.
- Ship of magic by Robin Hobb

The blade cut through flesh and bone in one smooth movement, and his bellow turned to a scream.
- The Faceless Ones (Skulduggery Pleasant - Book 3) by Landy Derek

Behind him Hrun screamed, but it sounded more like a bellow of rage than a cry of pain.
- The Colour of Magic by Terry Pratchett

Examples of below in a sentence

The young grass below the man's open mouth stirred.
- From Russia with love: a James Bond novel by Ian Fleming

The gorge was 650 feet below the bridge and there was no path down.
- The Replacement Child by Christine Barber

Far below me the hologram grabbed the nearby leg of the divan to steady herself.
- Some Girls: My Life in a Harem by Jillian Lauren

Any light could be seen from down below.
- Secret Weapon Spouse by B. J. Daniels