Goodnight or Good Night: Which Is Correct? 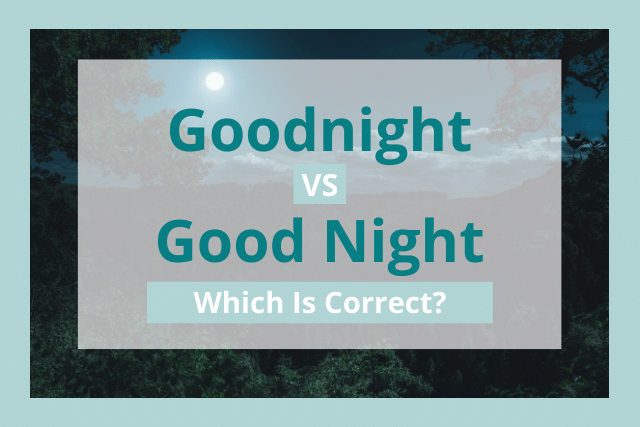 Is good night one word or two?

The short answer is that both forms are acceptable spellings. You can use either goodnight or good night when you’re saying farewell to someone at the end of the evening.

However, good night, with two separate words‌, is considered the more correct way to spell this word in formal writing.

This article will explain how to remember the difference between goodnight and good night and help you use this word correctly in your writing.

Is Goodnight One Word or Two?

Goodnight can be spelled as one word or two words. Let’s take a closer look at the nuances between these two spellings.

In the past, good night was the only correct way to spell this word. It’s an open compound word, meaning it includes a space in the middle, just like good afternoon and good morning. 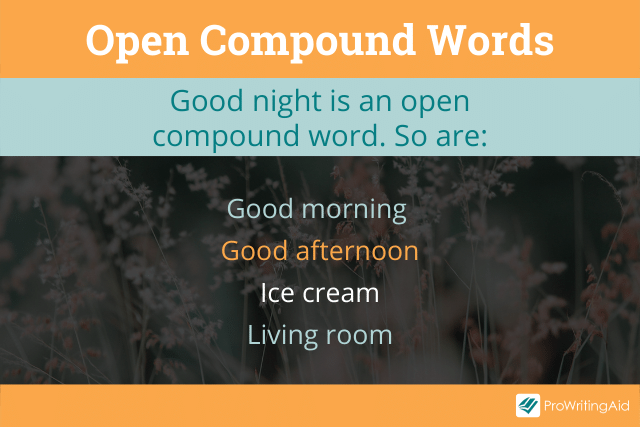 In recent decades, however, goodnight became a popular alternative spelling.

Another difference is that the spelling goodnight is better suited for informal settings, such as when you’re texting your friends at the end of the evening.

On the other hand, if you’re composing a professional email or writing a book, it’s better to use the older spelling, good night. 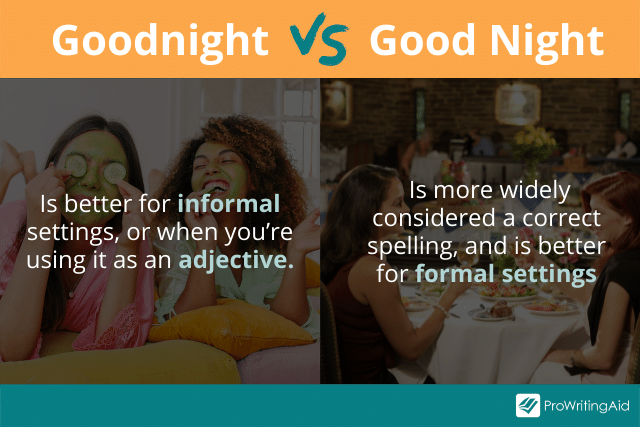 The most common usage of good night is as an interjection. It’s a common farewell phrase that you might use late in the day. One way to think of it is as a shorter form of the sentence “I hope you have a good night.”

For example, if you’re leaving a party at the end of the evening, you might say “good night” to the other guests on your way out.

Similarly, if you’re texting late in the evening, you might text the other person “good night” to let them know that you’re about to go to sleep.

Goodnight can also function as an adjective, if you’re using it to describe a noun. For example, a kiss might be a “goodnight kiss” if it’s given right before bed.

Some English experts prefer to use good night with a space as a farewell phrase, and goodnight or good-night as an adjective.

It makes sense to combine the two words in this scenario, because that way the reader won’t get confused about how the phrase splits apart.

Combining good and night prevents the reader from accidentally reading “good night kiss” as the opposite of a “bad night kiss.”

Finally, another meaning of good night is simply to describe a night as good. For example, you could say “I had a good night at the party.”

In this case, it’s not a compound word—it’s just the words good and night used separately. You should always spell good night with a space in this scenario. 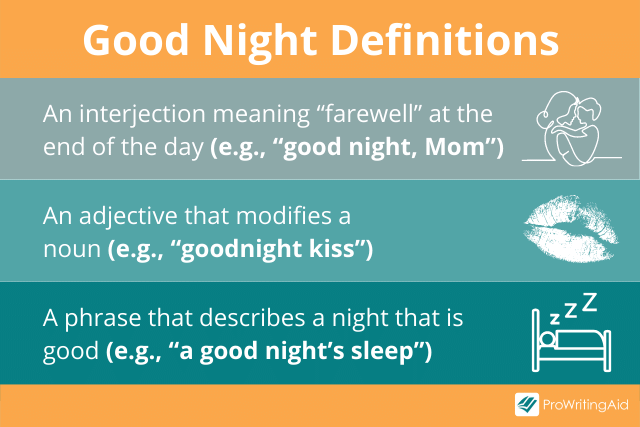 Let’s look at some examples of good night and goodnight in English literature.

“Do not go gentle into that good night. Rage, rage against the dying of the light.”—Dylan Thomas, In Country Sleep and Other Poems

“Good night, good night! parting is such sweet sorrow, that I shall say good night till it be morrow.”—William Shakespeare, Romeo and Juliet

“They go home, get into bed, toss and turn, wondering how it was done. It takes them a good night’s sleep to forget all about it.”—Leigh Bardugo, Six of Crows

“Keep twiddling those dials: the next password will be ‘Mad-Eye.’ Keep each other safe. Keep faith. Good night.”—J.K. Rowling, Harry Potter and the Deathly Hallows

“One by one families broke off with a good night and a squeeze of the hands, suddenly grateful for the company of neighbors. Doors closed to warm houses. Candles were lit in windows.”— Nicole Krauss, The History of Love

“Life is full of stories. Or maybe life is only stories. Good night, my dear Nao.”—Ruth Ozeki, A Tale for the Time Being

“I want to call you every five minutes. I want to text you good night every night. I want to make you laugh.”—Jenn Bennett, The Anatomical Shape of a Heart

“The cure for a broken heart is simple, my lady. A hot bath and a good night’s sleep.”—Margaret George, Mary Queen of Scotland and The Isles

“The woman who picked up the other end of the phone was named Michelle. And I told Michelle that I was a kid and did not need an exercise machine, but I hoped she was having a good night. That’s when Michelle hung up on me.”—Stephen Chbosky, The Perks of Being a Wallflower

“The Librarian looked at his charges approvingly, made his last rounds of the slumbering shelves, and then dragged his blanket underneath his desk, ate a goodnight banana, and fell asleep.”—Terry Pratchett, Sourcery

“Goodnight you princes of Maine, you kings of New England.”— John Irving, The Cider House Rules

“This is what it’s like to say goodnight and mean goodbye.”—Neil Hilborn, Our Numbered Days

“That goodnight in the garden was for all time. Anne never saw Ruby in life again.”—Lucy Maud Montgomery, Anne of the Island

“In the Glade, Chuck had become a symbol for him—a beacon that somehow they could make everything right again in the world. Sleep in beds. Get kissed goodnight.”—James Dashner, The Maze Runner

“He can ask you out and take you to dinner and try to steal a goodnight kiss.”—Linda Kage, Price of a Kiss

“It’s when I’m sitting alone with the phone in my hand dialing your number and hanging up that I would trade a thousand tomorrows for just one yesterday. Then I could just call you to tell you goodnight.”—James Frey, A Million Little Pieces

“I would have told him I loved him. But I didn’t. I didn’t because I didn’t know. I didn’t even say goodnight. Or goodbye.”—T.J. Klune, Into This River I Drown

How to Remember the Difference Between Goodnight or Good Night

A good rule of thumb is to use good night rather than goodnight when you’re using it as an interjection. The two-word spelling is generally the safer choice, since it’s an older spelling and accepted in all English dictionaries.

One way to remember that you need to use a space is to think about the opposite interjection, good morning, which is the phrase you say at the beginning of the day, rather than at the end of the day. You should always spell good morning with a space. Therefore, it’s safe to spell good night the same way.

When you’re using goodnight as an adjective, it’s all right to omit the space. You can remember this by substituting the word for a different adjective, like “gentle kiss” or “friendly kiss.” These adjectives have one word. Therefore, it’s fine for the adjective goodnight to have one word too.

If you’re not sure you’re spelling good night correctly, you can always run your work through ProWritingAid, which will help you solve the error in one click.