Flys or Flies: What’s the Difference? 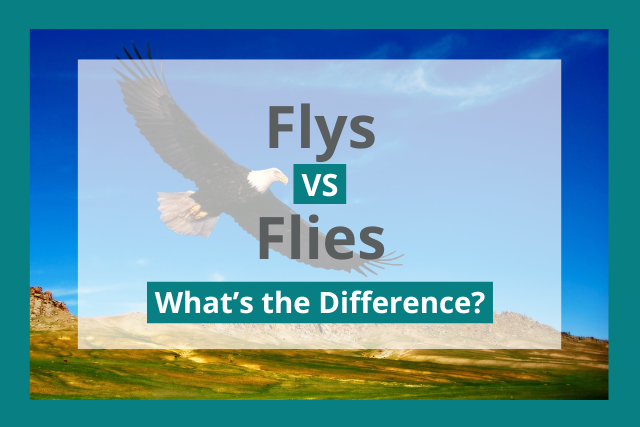 Usually, when you want to make a noun plural, you simply have to add an S to the end of the word.

So is the plural form of fly supposed to be flys?

This article will explain the difference between flies and flys and give you examples of how to use this word correctly.

Which Is Correct: Flies or Flys?

Is flys a real word? The answer is no—it’s just a common misspelling.

The verb fly means “to move through the air.” Many things can fly, from a fly ball in a baseball game to a bird in the sky.

The third-person singular present tense conjugation of the verb fly, which is used with pronouns like he, she, and it, is always flies, with the letters I-E-S. 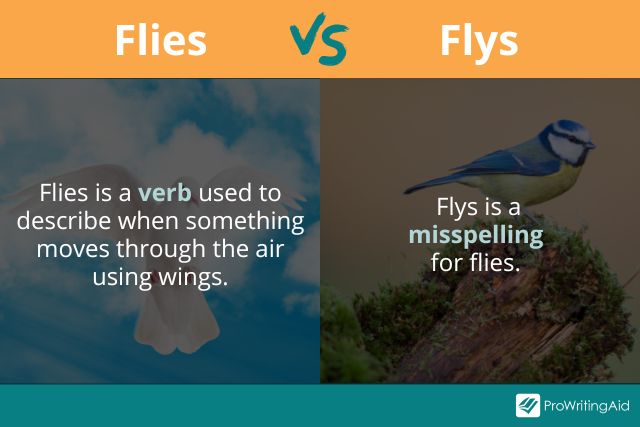 Here are some examples of how to use the verb flies in a sentence:

The same conjugation rule holds true with many other verbs that end with the letter Y. Here are some other examples that follow this pattern:

If you can remember this general rule for verbs ending in Y, then you’ll be able to remember the correct spelling of flies easily.

What Is the Plural of Fly?

We’ve talked about the verb to fly. What about the noun fly, which means “a small flying insect?” Should the plural be flies or flys?

The answer is also flies with an I-E-S, not flys with a Y-S. It’s easy to remember, because it’s spelled the same way as the verb.

Here are some examples of how to use the plural flies in a sentence:

It’s worth noting that there was once a time when flys was actually a real word. Back in 19th-century England, fly referred to “a type of four-wheeled vehicle operated by the strength of human legs.” The correct plural form of this noun was flys.

Since this mode of transportation is no longer used, you’re unlikely to ever use the word flys in modern English, unless you’re writing about 19th-century England.

Examples of Flies Used in Sentences

The best way to learn spelling is to see examples in sentences. Here are some examples of flies from successful English books.

“A man that flies from his fear may find that he has only taken a shortcut to meet it.”—J.R.R. Tolkien, The Children of Húrin

“I keep thinking about a tale my nurse used to read to me about a bird whose wings are pinned to the ground. In the end, when he finally frees himself, he flies so high he becomes a star.”—Shannon Hale, Princess Academy

“And even if he forever flies within the gorge, that gorge is in the mountains; so that even in his lowest swoop the mountain eagle is still higher than other birds upon the plain, even though they soar.”—Herman Melville, Moby Dick

“Disgusted at the guilt or absurdity of Mankind, the Misanthrope flies from it: He resolves to become a Hermit, and buries himself in the Cavern of some gloomy Rock.”—Matthew Gregory Lewis, The Monk

“‘I was trained to be an evil mastermind from a young age. Pulling the wings off flies, poisoning the earth’s water supply—I was covering that stuff in kindergarten.’”—Cassandra Clare, City of Ashes

“Look, see the child’s swollen, swollen belly and the flies that crawl at the corners of his eyes, his skeletal limbs: will it make it easier for you to know his name, his age, his dreams, his fears? To see him from the inside?”—Neil Gaiman, American Gods

“A spider’s life can’t help being something of a mess, with all this trapping and eating flies.”—E.B. White, Charlotte’s Web

Conclusion: Flys Isn’t a Real Word, But Flies Is

There you have it—a complete guide to flys vs flies. Whether you’re using fly as a noun or a verb, you should always spell it flies when you add an S to the end.

If you still need a little help, ProWritingAid will highlight any misspelled words in your writing and help you fix them with one click. Try out our free grammar checker today.