Exclude in a Sentence: Correct Usage and Examples 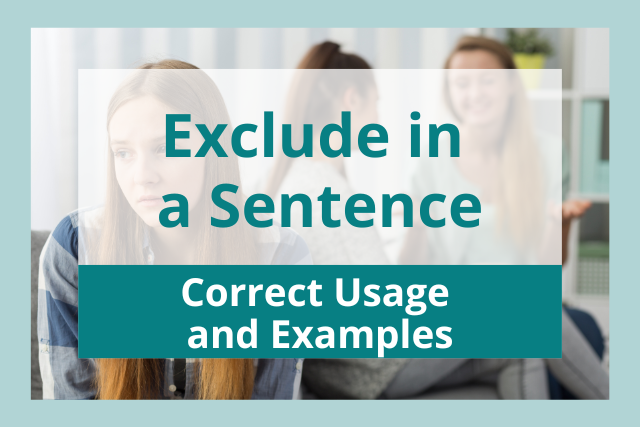 The verb exclude means to leave out. There are many ways to use it in a sentence, for example, “Ben wanted to exclude his little sister from his club.”

Today, we will take a closer look at the correct way to use exclude in a sentence, along with many examples.

What Does Exclude Mean?

Before we learn how to use exclude in a sentence, we need to understand what it means. A short definition is to “leave out.” Typically, it means to leave something out on purpose.

Exclude can refer to purposefully excluding a group of people from an institution or organization. Some synonyms for this definition include ban, shut out, and prohibit.

Exclude can also refer to keeping something, instead of people, out of somewhere, and sometimes it means “to leave out of consideration or rule out.” Synonyms for this definition include eliminate, factor out, and preclude.

We can use the past tense excluded as an adjective or even to describe an emotion. A person who feels left out can feel excluded. We can also use it as a descriptor of someone who has been excluded, e.g. “the excluded women.”

How to Use Exclude in a Sentence

Let’s take a closer look at how to use exclude in a sentence with each of its definitions.

First, let’s see how we might use exclude to refer to a person or group of people.

Next, here are some example sentences of how exclude is used to mean leaving a thing out or ruling something out.

Finally, let’s look at how excluded might be used as a descriptor. 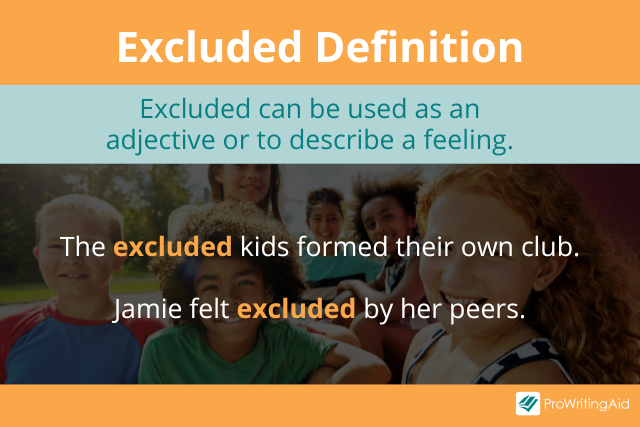 Examples of Exclude in a Sentence

The best way to learn how to use a word like exclude in a sentence is to read many examples of its various uses. Below are some real examples of exclude in literature, media, and the news.

“In recent years, researchers who study autism have made an effort to include more women and girls in their studies. However, despite these efforts, most studies of autism consistently enroll small numbers of female subjects or exclude them altogether, according to a new study from MIT.”—Anne Trafton, “Studies of autism tend to exclude women, researchers find,” MIT News, September 8, 2022

“Feminism is, of course, part of human rights in general—but to choose to use the vague expression human rights is to deny the specific and particular problem of gender. It would be a way of pretending that it was not women who have, for centuries, been excluded. It would be a way of denying that the problem of gender targets women.”—Chimamanda Ngozi Adichie, We Should All Be Feminists

“To be great, be whole; \ Exclude nothing, exaggerate nothing that is not you. \ Be whole in everything. Put all you are \ Into the smallest thing you do. \ So, in each lake, the moon shines with splendor \ Because it blooms up above.”―Fernando Pessoa, Poems of Fernando Pessoa

“I exclude them from my perception.”—N. K. Jemisin, The Hundred Thousand Kingdoms

“Zuwara is popular because it is close to Sicily, 300 miles north, and because it is populated by ethnic Amazigh (Berbers), who exclude outside security forces, giving smugglers a freer hand, according to Tripoli police.”—“Migrants’ tales: I feel for those who were with me. They got asylum in the sea,” The Guardian, October 20, 2014

Now you know how to use exclude and all its related forms in sentences. 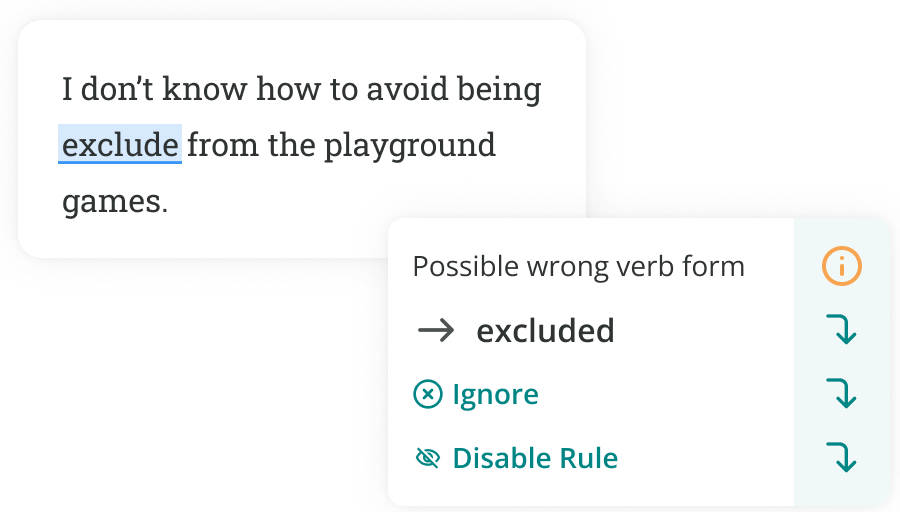 Don’t let words like exclude trip you up. If you struggle with the correct usage of certain words, ProWritingAid can help. Use our free grammar checker to find misspellings, confused words, and tense mistakes.