ProWritingAid
ProWritingAid
Blog Grammar Rules Comma Before or After But: When and How to Use Commas Correctly

Comma Before or After But: When and How to Use Commas Correctly 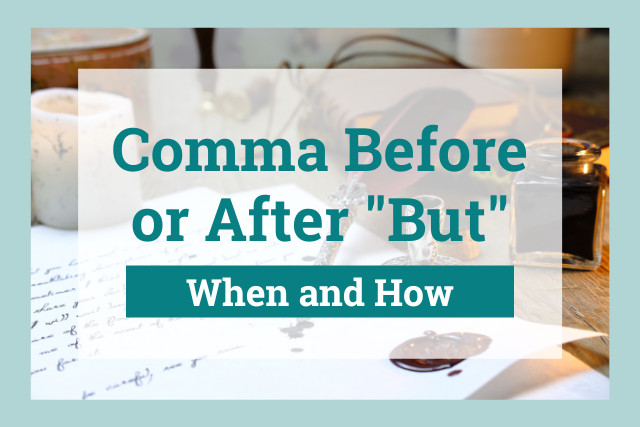 Should you use a comma before but or after but?

You should use a comma before but whenever you’re connecting two independent clauses. It’s much rarer to use a comma after but.

In this article, we explain this comma rule and give you examples of sentences that use commas before and after but.

Do You Put the Comma Before or After But?

There are three possible situations you might encounter when it comes to using a comma with the word but.

Let’s look at each of these punctuation rules in more detail.

You should use a comma before but if you’re using the word but to connect two independent clauses.

An independent clause is a string of words that can stand on its own as a complete sentence, with a subject and an object.

For example, “I love food” and “I hate cooking” are both independent clauses.

For example, you would use a comma in this sentence: “I love food, but I hate cooking.”

Here are a few more examples of cases when you need to include a comma before but:

Notice that all of the above examples use the word but to connect two independent clauses, both of which could stand alone as complete sentences.

No Comma Before or After But 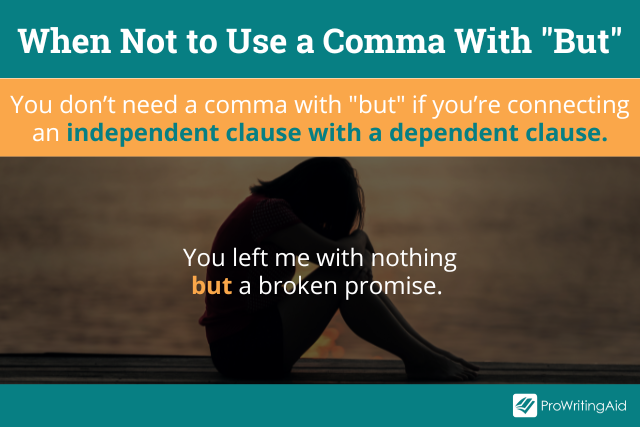 Here are some other examples of cases when you don’t need a comma:

Notice that in each of the above examples, the clause that follows the word but is dependent, meaning it isn’t a grammatically complete sentence on its own.

You should only do this when you’re interrupting the sentence flow with another word or clause immediately after the word but, to create emphasis. 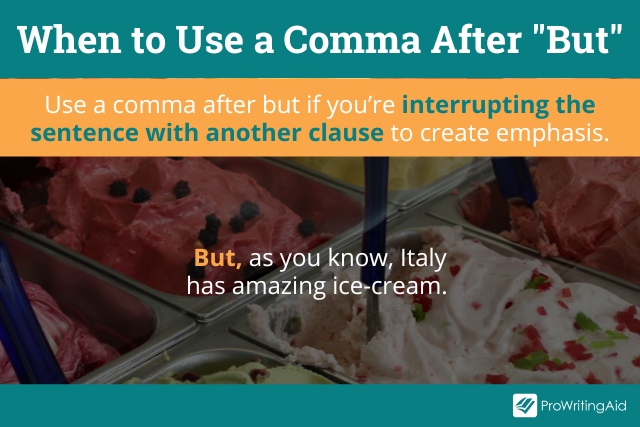 For example, you might write, “But, my dear, you didn’t tell me the whole story.” In this case, the phrase “my dear” is an interrupter that adds dramatic literary effect.

Here are some other examples of cases when you might include a comma after but:

Notice that all of the above examples include an interrupter immediately after the word but.

Remember that this is a rare situation, so most of the time, you should avoid using a comma after but.

If you’re unsure whether to use a comma before or after but, you can run your writing through ProWritingAid to see if you’re placing all your commas correctly.

When to Use a Comma Before But

The best way to learn grammar rules is by studying examples. Let’s take a closer look at some examples of comma usage from English literature.

Examples of Times to Use a Comma Before But

“Family is a story that is told to you, but the story that matters most you must tell yourself.”—Ken Liu, The Hidden Girl and Other Stories

“She’d always been a great liar. The only difference between lying and acting was whether your audience was in on it, but it was all a performance just the same.”—Brit Bennett, The Vanishing Half

“The rules aren’t written down anywhere, but the important rules rarely are.”—Alix E. Harrow, The Once and Future Witches

Examples of Times to Use No Comma Before or After But

“There was nothing else to do but continue, no matter how frightened she might be.”—Shelley Parker-Chan, She Who Became the Sun

“She was going to elaborate but lost courage when she saw Martha’s expression darken.”—Clare Chambers, Small Pleasures

“They left her in Merilance with nothing but a book.”—V.E. Schwab, Gallant

Examples of Times to Use a Comma After But

“But, of course, Billy felt like it was just people attacking him. When you have everything, someone else getting a little something feels like they’re stealing from you.”—Taylor Jenkins Reid, Daisy Jones & The Six

“I school my face to blankness, but, inside, my emotions are raging like a creek after a spring storm.”—Justina Ireland, Dread Nation

“Nobody’s perfect, she liked to say. But, man, we all fall short so beautifully.”—Richard Powers, Bewilderment

Commas Can Be Complicated, But Here’s One Simple Rule