Can You Start a Sentence With Although? 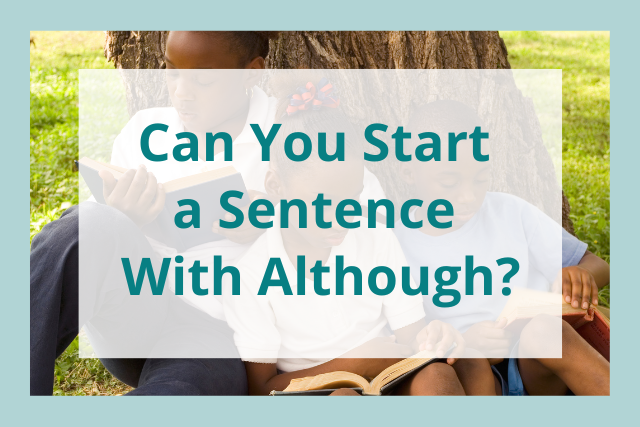 You might have learned in school that you shouldn’t start a sentence with a subordinating conjunction, such as although, before, or after.

So, is it grammatically correct to start a sentence with although?

The answer is yes! It’s perfectly okay to start a sentence with although, as long as you use it correctly.

Read on to learn more about how you can use although at the beginning of a sentence. 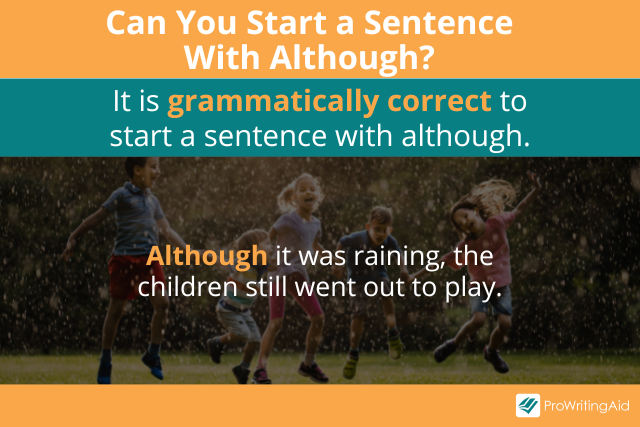 How to Use Although in a Sentence

Although is a subordinating conjunction that means “in spite of the fact that” or “even though.”

When Can You Start a Sentence With Although?

The English language has many tricky grammar rules, but it has no rule against starting a sentence with although.

A phrase that begins with although is called a dependent clause, meaning that it isn’t a full sentence on its own. Instead, it has to be connected to an independent clause, which forms the main clause of the sentence.

For example, consider the following sentence: “Although the road was long, she never gave up.”

You can put the dependent clause at the end of the independent clause instead, which would turn this sentence into “She never gave up, although the road was long.” It’s grammatically correct regardless of the order of the two clauses.

One of the most common mistakes related to starting a sentence with although is when you fail to attach it to a complete thought.

Consider this example: “She never gave up. Although she definitely considered it.”

In this case, these two sentences are not grammatically correct together. “She never gave up” is a complete sentence, but “although she definitely considered it” is a sentence fragment.

Some writers use sentence fragments as a stylistic choice or for dramatic effect, but it’s best to do so sparingly and deliberately. Unless you have a good reason to use this device, always attach although to a complete sentence. 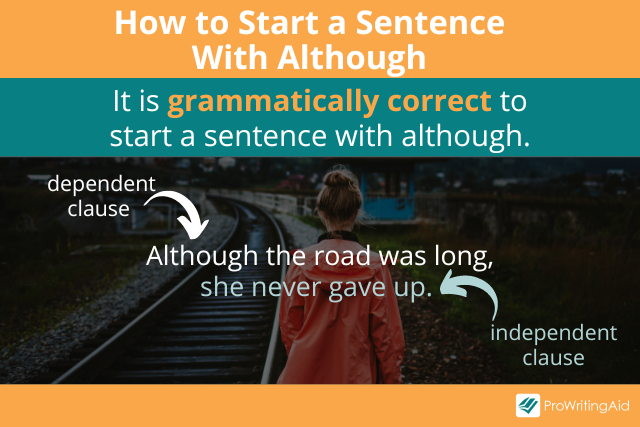 Can You Start a Paragraph With Although?

Examples of How to Use Although

The best way to learn grammar is by reading plenty of examples. Let’s look at some more examples of although from English literature.

Although in the Middle of a Sentence

Let’s start with some examples of sentences that include although, but don’t begin with although.

“I have to say that although it broke my heart, I was, and still am, glad I was there.”—Markus Zusak, The Book Thief

“Life, although it may only be an accumulation of anguish, is dear to me, and I will defend it.”—Mary Shelley, Frankenstein

“Heart always wins out over the mind. The heart, although reckless and suicidal and a masochist all on its own, always gets its way.”—J.A. Redmerski, The Edge of Never

“For several years, I had been bored. Not a whining, restless child’s boredom (although I was not above that) but a dense, blanketing malaise.”—Gillian Flynn, Gone Girl

“Would you rather I didn’t talk? If you say so I’ll stop. I can stop when I make up my mind to it, although it’s difficult.”—Lucy Maud Montgomery, Anne of Green Gables

“He knew one of the women well, and had shared his universe with her. They had seen the same mountains, and the same trees, although each of them had seem them differently.”—Paulo Coelho, The Valkyries

“Instead of possibilities, I have realities in my past, not only the reality of work done and of love loved, but of sufferings bravely suffered. These sufferings are even the things of which I am most proud, although these are things which cannot inspire envy.”—Viktor E. Frankl, Man’s Search for Meaning

Although at the Start of a Sentence

Now let’s look at some examples of sentences that begin with although. In the last example by Neil Gaiman, although is used in a sentence fragment, rather than in a complete sentence.

“Although it’s good to try new things and to keep an open mind, it’s also extremely important to stay true to who you really are.”—Gail Honeyman, Eleanor Oliphant Is Completely Fine

“Although Cecily was unlike Jem in every other conceivable possible way, she did share one quality with him. Stubbornness. When Cecily said she wanted something, it did not express an idle desire, but an iron determination.”—Cassandra Clare, Clockwork Princess

“Wilbur never forgot Charlotte. Although he loved her children and grandchildren dearly, none of the new spiders ever quite took her place in his heart.”—E.B. White, Charlotte’s Web

“Although no one will ever accuse me of being much of a science student, one thing I learned from science classes is that energy is never created and never destroyed.”—John Green, Looking for Alaska

“First of all, the beauty that he sees is available to other people and to me too, I believe. Although I may not be quite as refined aesthetically as he is… I can appreciate the beauty of a flower.”—Richard P. Feynman, The Pleasure of Finding Things Out

“Although I’m only fourteen, I know quite well what I want, I know who is right and who is wrong.”—Anne Frank, The Diary of Anne Frank

“He had heard about talking to plants in the early seventies, on Radio Four, and thought it was an excellent idea. Although talking is perhaps the wrong word for what Crowley did. What he did was put the fear of God into them.”—Neil Gaiman, Good Omens

How to Punctuate Although

In general, you often need to use a comma before although if you’re attaching it to the rest of a sentence. For example:

When you start a sentence with although, you should include a comma after the full clause that contains it. For example:

The comma goes after the full subordinate clause rather than directly after although.

Conclusion on Can You Start a Sentence With Although?

Starting a sentence with although is grammatically correct. Just make sure you’re creating a complete sentence. 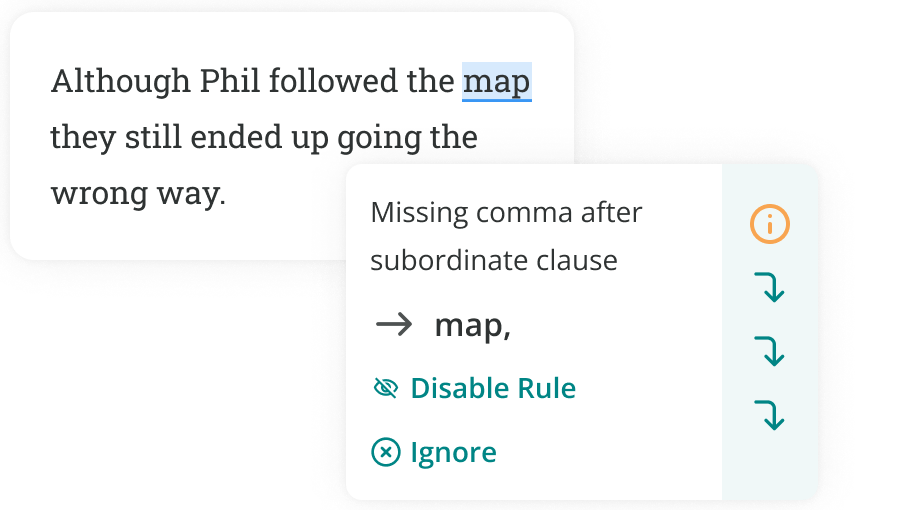 Although it takes practice to create clear and effective writing, using ProWritingAid will certainly help! You can run your writing through the grammar checker to make sure you’re writing strong, grammatically correct sentences.