The Dos and Don'ts of Co-Writing a Novel 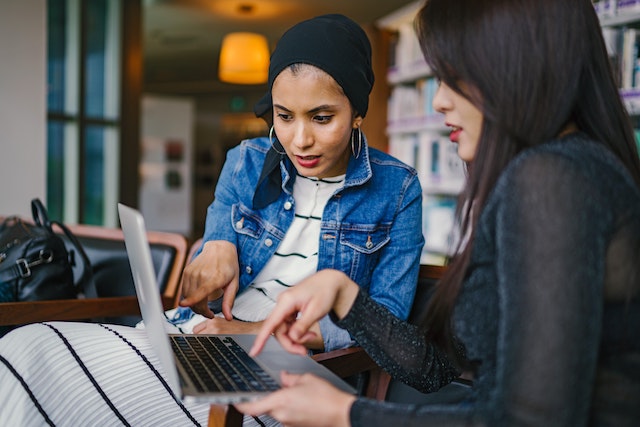 I’m interested in the idea of collaboration because I’ve just finished a comic novel with two writer pals. It’s called Kitten on a Fatberg. It’s a story in emails about an eccentric writers’ group and it took us about two-and-a-half years to finish. Expect feuds, romance, and pathos—but also a cosplay stalker, an alien mothership invasion, and a deeply symbolic bowl of olives. It’s got it all, frankly.

Working with my two pals Martin and Alex was a pleasure from start to finish. We lucked into a process and a partnership that seemed to work for all of us, and we’re already starting our next book, the story of a harmless, ageing UFO cult that’s down to its last handful of members.

It’s all got me thinking about collaboration. We’re familiar with co-writers in film, copywriting, and academia, but why not novels? What’s the history of the practice? What are the pros and cons? And what are our top tips for anyone thinking about writing a book together?

A Brief History of Co-Writing Fiction

The idea of the writer working alone, a tormented soul removed from the world who must slay his or her demons in order to harvest artistic gold, is entrenched in our culture. Think of our obsession with literary recluses likes J.D. Salinger and Cormac McCarthy. Think of writers in film and fiction, like James Caan in Misery or Roth’s Nathan Zuckerman, hidden away on his New England mountain.

But actually, the idea of the isolated writer is probably quite a new one. Works like The Iliad and The Aeneid would have been polished around the fireside by several hands, for example, and embellished and honed further as they were passed on from one generation to the next. Shakespeare and his ilk were doubtless merry collaborators too, members of a working troupe who frequently wrote together and probably tweaked their plays in the light of audience reception.

Alexandre Dumas was another serial collaborator, reportedly using over 70 different scribes to help him fill out scenes and sketch in historical detail. One co-writer in particular, Auguste Maquet, is thought to have been instrumental in the planning and execution of The Three Musketeers and The Count of Monte Cristo, though he struggled all his life to get the credit he believed he deserved.

In later literary history, the surrealists and the Beats were both frequent collaborators. C.S. Lewis and J.R.R. Tolkien consulted endlessly by letter on each other’s works, though neither credited the other. F. Scott Fitzgerald worked words from his wife Zelda’s letters into his stories, possibly not always with her consent.

Genre fiction attracts lots of collaborators, perhaps because there are handy tropes and templates to fall back on. Stephen King has written with his son Owen King, among others. Michael Moorcock has been a serial collaborator, while Neil Gaiman and Terry Pratchett co-created Good Omens. In crime fiction, there are several writing partnerships that are also relationships, including Nicci French (a.k.a. Sean French and Nicci Gerrard), and Per Wahlöö and Maj Sjöwall, creators of the Martin Beck novels and pioneers of Nordic Noir.

Collaboration, when it works, offers many advantages but also poses a few potential challenges. On the possible downside, managing the writing process can be cumbersome. Then you have two or more egos to fall out about ideas, edits, taking credit, and the rest. And of course if things go wrong, you have twice as much doubt and negativity and writers’ block to manage.

On the plus side, you get two or more heads instead of one. That means more ideas, a richer source of characters and plots, and double the life experience to draw on. With the right mindset and motivation, you have people working as a team to get a lengthy project complete. Where one has a dip in energy or motivation another can pick up the baton.

Here, then, are our tips for co-writing a novel.

Choose a process that works for everyone.

With a collaboration, the How is almost as important as the What. You have to find a process that works for all your schedules and writing habits.

Our book is written as a series of emails by seven different characters. We each ran a couple of characters and fired in messages from them to a cloud-based email account we had set up specially. We communicated separately about the shape and development of the story too, of course, but this basic email set-up enabled each of us to write when able, without having to get bogged down in following a strict order or have to wait for someone else to finish a section before we could do our next bit.

Collaboration is a working relationship, and what matters is writing with people whose work you respect. You must have a team mindset and a desire to get things finished.

In some ways not being too close to your co-writers can be an advantage, as it may be easier to discuss things dispassionately if there’s a creative disagreement or practical issue.

Work as a team.

When you’re co-writing, you can’t afford to be too precious about who wrote what or whose edits trump whose. You’re in it together, and you stand or fall together.

A few basic principles agreed at the outset can help embed the team ethos and pre-empt disagreements later. For example, co-writers often agree not to put words back in that a collaborator has taken out at the editing stage. They may have a pact that no co-writer can undo a plot point that another co-writer introduced in a previous section. And they may agree not to reveal to others exactly who wrote what.

As you start writing any novel, the material that emerges inevitably diverges in all sorts of ways from your original plan. So, beyond the day-to-day business of drafting the story, collaborators need to meet (or at least communicate) regularly about how the story is taking shape and to make sure everything is on track.

We would meet in our local pub every few weeks, where we would sit in a nook and discuss our characters like old absent friends who can’t help their endearingly wayward behaviour. We would think about arcs and structure, share our plans for our characters, and come away refreshed and ready for the next bout of drafting. And, as the manuscript took shape, I would always think: this is a fun way to make a book.

If co-writing sounds fun to you, too, try it out!

As a reader of this blog, you can pre-order Kitten on a Fatberg for a 10% discount – just quote promo code KITTEN10.

blake.alpi
Interesting article. Egos can always cause problems when working with people. I like the idea you have about making an agreement upfront on how things go to help stop conflicts before they start. Email sounds like a very cumbersome way to collaborate. There are several tools out that easy working together. Google Doc being one that is free and people can even work on the same page at the same time. Perhaps you could do a post on the different tools writers can use to collaborate with.