How to Use Allusion Effectively

TAGS:
writing fiction
how to write a novel
literary devices

Reading that sentence, you immediately know John thinks the person he’s referring to is not a principled individual. In fact, using Mother Teresa as a reference point, you learn a lot about both John and how he views this woman. You infer his opinion instantly, and depending on what comes before and after this comment, you learn more about John and how he thinks.

And you get all of this information from a simple allusion.

An allusion is a literary device that adds meaning to your work by alluding or referring to a person, place, or thing that’s considered common knowledge. This could be a reference to a work of art or literature, a famous person, a popular location, a historic event, a cultural norm, etc., that readers use to understand your implication.

Instead of saying, "She was loving, kind, giving, and unselfish and spent her life helping those less fortunate," you could write, "She rivaled Mother Teresa." It’s a succinct way to give your readers an instant understanding. Many writers allude to mythology, Shakespeare, and other literature to prompt readers to flesh out their meaning.

An allusion requires a few features: it must be brief, indirect, and reference something else. Usually, an allusion references something historical or in another art form. You can also reference pop culture or current events.

Allusions must be brief. If your allusion requires a more detailed explanation, you move into the territory of extended metaphors or comparisons. Similarly, an allusion should be indirect. Imagine if John in the above example went on to say that Mother Teresa was highly regarded for her acts of service to the poor, but the person he's talking about has no empathy and is very selfish. This is no longer an allusion. In John’s over-explanation, he weakens his comparison.

Allusion is a powerful tool—but only if you’ve got your spellings right. Making a reference but misspelling the name of the person or object you are alluding to distracts your reader at best and completely derails your meaning at worst.

ProWritingAid has thousands of entity names programmed in, so you can check that you’ve got the correct spelling, every time. 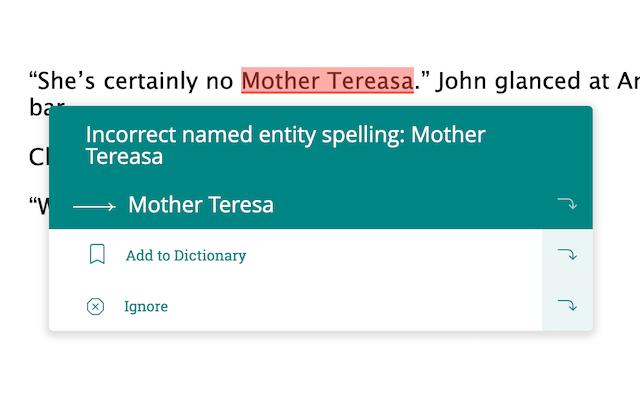 There are several literary devices that involve comparison. Metaphor is one of the most common devices. In a metaphor, you compare two unlike things. Here are a couple of examples.

A metaphor can include an allusion. For example, you could say, "Susan is the Da Vinci of pastry chefs." It’s a metaphor because you are comparing Susan, a pastry chef, to an artist and inventor. It’s also an allusion to a historical artist. There’s no need to elaborate to explain that Susan makes beautiful, elaborate pastries.

An extended metaphor is another rhetorical device. We could elaborate on Susan’s skills by adding more references to beautiful art.

Similes are similar to metaphors, but they use "like" or "as" for comparison. A famous example is from the movie Forrest Gump: "Life is like a box of chocolates." Like metaphors, similes can include an allusion. We could say, "Susan, the pastry chef, is like Da Vinci when she bakes."

Another common literary device that involves comparison is analogy. It can be easy to confuse allusion and analogy, so let's discuss the differences. An analogy is similar to a metaphor because it compares two things. These things may be alike or unlike. The difference is in the intent. A metaphor is a device to show a difference. An analogy's goal is to explain the difference.

An analogy can include allusion. Remember, an allusion is just a comparison to some person, event, book, art form, etc. - "The game was as terrible of a defeat as Waterloo." - "She’s as beautiful as Helen of Troy." 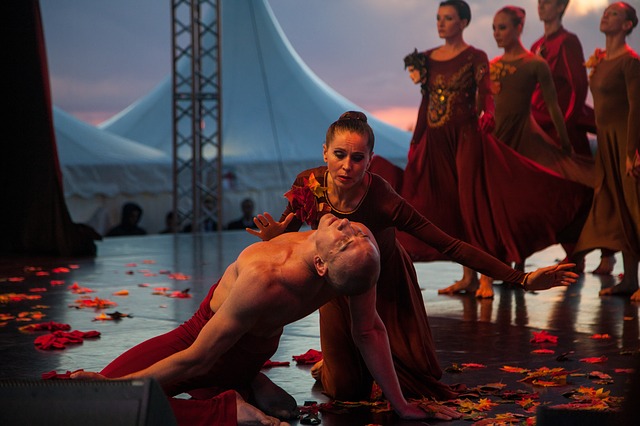 We use allusion in our everyday speech when we use phrases like, "Don’t open Pandora’s Box," "This is her 15 minutes of fame," or "I’m stuck in a Catch-22." When an allusion crops up in common speech, you know exactly what the person is referring to with no need for them to explain their meaning.

Examples of literary allusions include:

An allusion can also be subtle, sometimes used to foreshadow. This example uses historical context to foreshadow defeat:

You can easily simplify more complex thoughts and emotions by alluding to common references. When writers allude to mythology, they’re bringing the mystical and magical to their work. And when they refer to the Bible, such as calling someone a "Good Samaritan," they’re bringing in religious undertones.

You may refer to someone as a "Scrooge" or "Romeo" to identify their characters to your readers. And quixotic, which means extravagant or unrealistic, is a direct allusion to Cervantes’ character Don Quixote. Allusions can enhance your writing by offering further meaning, or you can use them ironically to compare two dissimilar things. It’s a great tool to reveal unspoken assumptions and biases.

One thing to note when using allusion is you shift the responsibility for understanding your meaning to your readers. Carefully choose your allusions so you don’t make your readers work too hard to figure out what you’re trying to say.

Sometimes allusion eludes us. For example, James Joyce was deliberately obscure, which is why his work is so hard to get through for some people.

When Joseph Conrad wrote the following passage in Heart of Darkness, he was referring to Greek mythology:

"Two knitting women" alludes to the Fates in Greek mythology and how they knit human life. This foreshadows the upcoming terrifying and horrific journey.

There’s a lesson to learn from Conrad here: make sure your allusions match your tone and your audience. I used to teach history, and I have a degree in anthropology. My readers don’t. Just because I understand an allusion doesn’t make it accessible to my audience. Obscure Russian literature and advanced scientific allusions will sail right over my head.

If you’re writing high fantasy, don’t allude to something in the real world. In my first book, I need to describe a character in a certain way. All I could think of was "Casanova." But Casanova doesn’t exist in my fantasy world, so I had to search out another term. Likewise, if your story takes place in a different historical time or culture, make sure your allusions make sense. Don’t say "All’s quiet on the Western front" if your book takes place in 1600s India.

Think about your target audience. Non-fiction writers can often make more specific allusions because their target audience is similar to them. If you’re writing Young Adult or Middle Grade fiction, your allusions should make sense to that age group.

Now that you understand allusion, you’ll spot it everywhere, not just in literature. Think of a person’s "Achilles’ heel" or someone who’s "an Einstein." Someone's greatest accomplishment could be their "ninth symphony."

What’s your favorite allusion? Let us know in the comments below how you use allusion in your everyday speech and your writing.

elliespetals
In my soon to be published book, my MFC mutters this line to herself: "Welcome to the party Daisy Buchanan." In reference to a glamorous party setting. Something Daisy might have been at in The Great Gatsby. I think most people know who Daisy Buchanan is.

88-123
I live with a woman whose writing has a magical palimpsest quality with one meaning dancing with another through implication, allusion, and partially hidden reference, that works by making me think, "I just read one thing, but of course it's this whole other thing related in a way I hadn't previously imagined." The effect is like a trestle crossing for two trains on different levels simultaneously. Your explication of allusion, you've made clear, is one of her tools. Thank you.

marleen
Can you compare and contrast allusions to clichés? At what point is the reference too common or not original?

davidmbutcher
Hi Marleen, I think that the often used or overused is the key to that. It is only my opinion but I would say that if you think to yourself 'I hear that a lot' or your gut tells you it sounds trite, you 're looking at a cliche. An allusion is to something outside of the immediate subject but hopefully follows with the reader understanding what is being conveyed as the article said. I tried this: I had to explain who's who in Game of Thrones to my uncle. He stopped listening after an hour. He said it was like 'Counting the teeth in the tigers mouth while it bites through your rib-cage'. Does that work?

lorijoanmorgan
I use them when I write so I don't lose what I am wanting to say. I may not leave it in but it gives me a reference when I go back.

flynn_mel
I agree with Marlene and wonder the same thing about cliches. Also curious about illusion as idioms. And for that matter cliches as idioms. That would make for an interesting article. I teach kids, and often use these articles in my classroom for discussions while in literature circles.

Feycha12
Hangs over my head like the Sword of Damocles. In general most use it incorrectly and I use as it is understood.