Passive voice can be dangerous, especially when it comes to how society views responsibility within a crime. It re-frames the question away from who perpetrated a heinous act and puts the public’s focus solely on the victim. How many times have you read:

When you read those examples above, who are you thinking about? Your focus is on the victim and their actions in each scenario. Put another way: when you read each sentence, who’s to blame?

Well, obviously the unarmed black man was running, so he’s to blame. And the young woman was out walking around after midnight? What did she expect?

Do you see how dangerous passive voice is? It sets victims up to catch the blame instead of placing it squarely on the perpetrators’ shoulders. Let’s look at each of the above examples rewritten in active voice.

Active voice places the focus on those who deserve blame. When you read these examples, you automatically want to know: Why did police shoot an unarmed black man? They must’ve shot him in the back if he was running from them. What good reason could they have to do that?

Too often women are blamed for being attacked because they were out late or in the wrong part of town. Often this kind of crime is reported in the passive voice without even mentioning the attackers: “A woman was attacked and gang-raped shortly after midnight.” But that’s wrong. Five men attacked a woman. Reporters and media need to use the active voice and put the actions on the subjects (the men) of the action, not the object (the woman). The men who attacked her are 100% to blame for the attack.

And that husband is a murderer. Hopefully, he gets life in prison without parole.

Donald Trump’s rally cry during the 2016 presidential election was "The system is rigged." How many tweets did the public read with those words? It made voters think Trump was being treated poorly just like they were during the election process. He portrayed himself as a victim despite his obvious wealth and privilege.

And Hillary Clinton tweeted in 2016, "Another unarmed Black man was shot in a police incident. This should be intolerable." This one doesn’t even have someone to blame because "a police incident" leads one to believe no individual officers pulled the trigger; it’s just something that happened, an incident.

Perhaps the moral of those two examples is politicians shouldn’t tweet. But that’s another article. Instead let’s talk about George W. Bush’s "mistakes were made" when the US armed forces tortured detainees at an Iraqi prison. And don’t forget Bill Clinton’s "mistakes were made" in response to a fundraising scandal in which he was embroiled.

We could write a book about the "mistakes were made" blame shifter. Previous presidents Ronald Reagan and Jimmy Carter and former British Prime Minister David Cameron all used this passive voice entreaty to shift blame away from themselves for their mistakes.

The problem in politics is the lack of accountability. Passive voice in politics allows politicians to act as if these mistakes were things that happened outside of their control. But that’s not true. Taking the Iraqi prison example, there was a whole hierarchy in place and a problem in the system that resulted in those detainees being tortured. We need to know who made the mistakes, what consequences are they facing, and how to ensure that this never happens again.

Wouldn’t it have been nice to hear from these elected officials we’re expected to trust and respect: "I made a mistake. Here’s what happened. And here are the changes that we are enforcing to prevent it in the future." We hold our children to higher standards than we hold our politicians.

Wouldn’t it be nice if all politicians had to run their speeches through ProWritingAid before they gave them?

What Does this all mean?

Passive voice is dangerous. It’s harmful to victims who get blamed for the crimes committed against them, and it happens in disproportionate amounts to women and minorities when crimes are committed. Trust me, now that you are looking for it, you will be amazed how often passive voice is used in a way that puts blame on the wrong shoulders.

How to Protect Yourself from Passive Voice

Using an editing tool like ProWritingAid can help you spot passive voice before it's too late. The Style report highlights when you've used passive voice and tells you how to fix it. 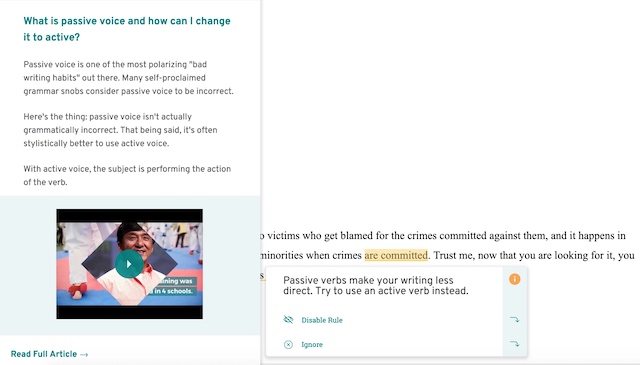 Did you spot the passive voice in the last paragraph of this article? Like before, the crimes are being committed by an unknown entity. Let's fix that. 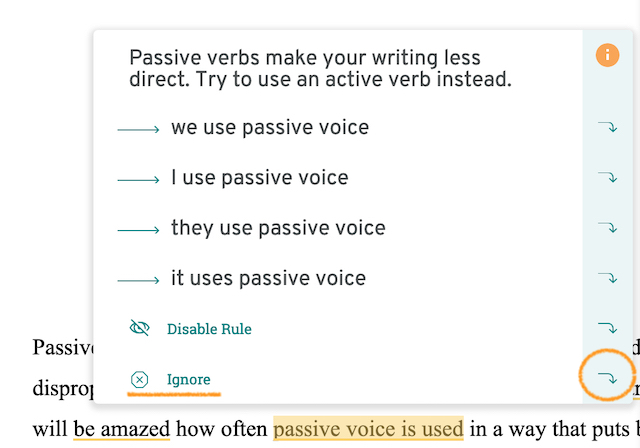 Using ProWritingAid, I can quickly change "passive voice is used" to "we use passive voice". Now we know who is committing this writing style crime! That said - if you've used passive voice intentionally, you can always ignore the suggestion and move on.

You can find out more about passive voice and ProWritingAid in this handy video:

We need to take a stand against passive voice once and for all. Let’s encourage all writers out there, not just fiction writers, to use active voice in every piece of writing. Let’s shine the spotlight where it should be.

Take politicians to task when they use passive voice. The next time a politician tries to use the "mistakes were made" utterance, call them on it. Ask, "Specifically who made mistakes?" Let’s see them worm their way out of a room full of reporters and writers asking for clarification on whom to blame.

Here’s to active voice all the way.