Starting Your Novel at the Midpoint 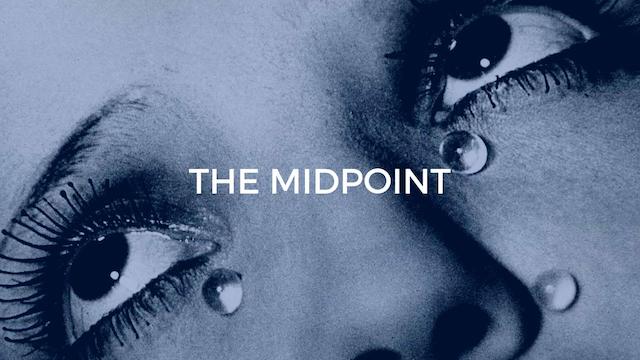 If you're about to write a novel, start with the midpoint. That's the place to build your world around.

The midpoint is the point of no return in a story. It's when the main character undergoes a crisis, and finds within themselves (or not) the necessary qualities to reverse the action or fortune of the book. Often this is the point at which the character is most challenged and therefore at their lowest.

The idea is developed in John Yorke's book Into The Woods as a convention or precept axiomatic to the development of screenplays. 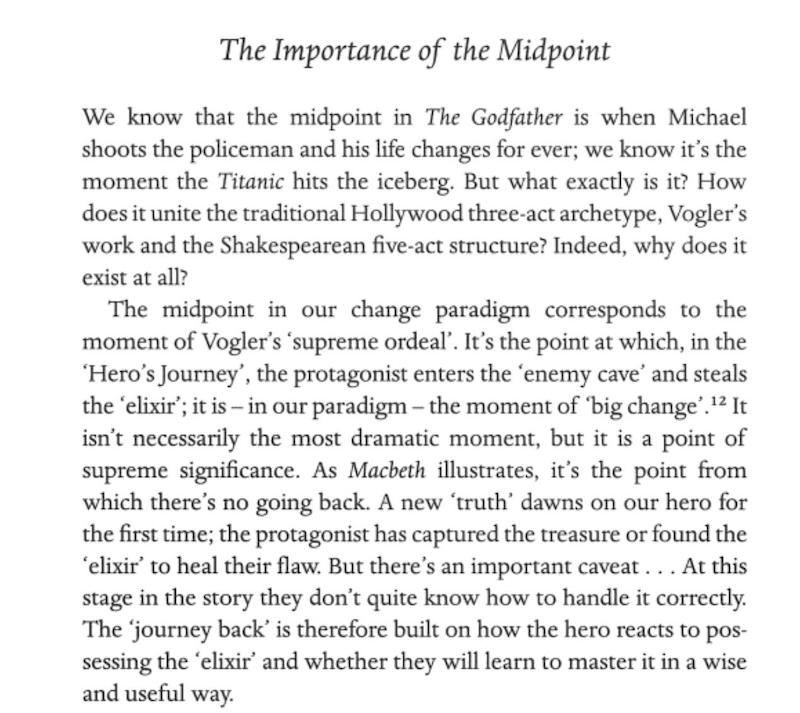 Think about the film Darkest Hour with Gary Oldman. The midpoint shows Churchill at his lowest confidence when Roosevelt informs him the Americans cannot substantially help the British in 1941. We get the sense that Western Europe is on its knees capitulating nation by nation daily, leaving Britain quite alone. Churchill's voice breaks during the call.

Next up, Road to Perdition starring Tom Hanks. It's a perfectly executed story. It's thrilling for a writer to watch the way everything is set up with such economy and resolved with such aplomb. Mike Sullivan is a good father and husband, but also has a job that requires him to be a violent killer. The film explores this ruthlessly.

Hanks, who must surely have a connoisseur's nose for story, said of the script, "At the moment we're dropped into the story, it is literally the last day of that false perspective."

At the midpoint of the movie, we find Mike Sullivan sitting in the hallway of his house, stunned to find his wife and child murdered. A perfect midpoint. Nothing can ever be the same and he is at an all-time low.

If you reverse engineer this, I think you may have a clue as to how to find a story. Find the major, life-changing setback, and build around it using the five-part structure.

What is the thing which truly severs your main character's relationship with who she was? What compels her to find the strength to undergo a spiritual metamorphosis? Where does she cry?

I think you're probably not going to have your character crying more than once in a book, so this simple rule—The Kleenex Test, we shall dub it—should help you locate the midpoint.

In Pride and Prejudice

I scrolled through Jane Austen's classic to the mathematical middle. Here we have Pride meet Prejudice and the pledge of the book's premise is fulfilled: Elizabeth refuses Darcy with harsh words.

"The tumult of her mind was now painfully great." 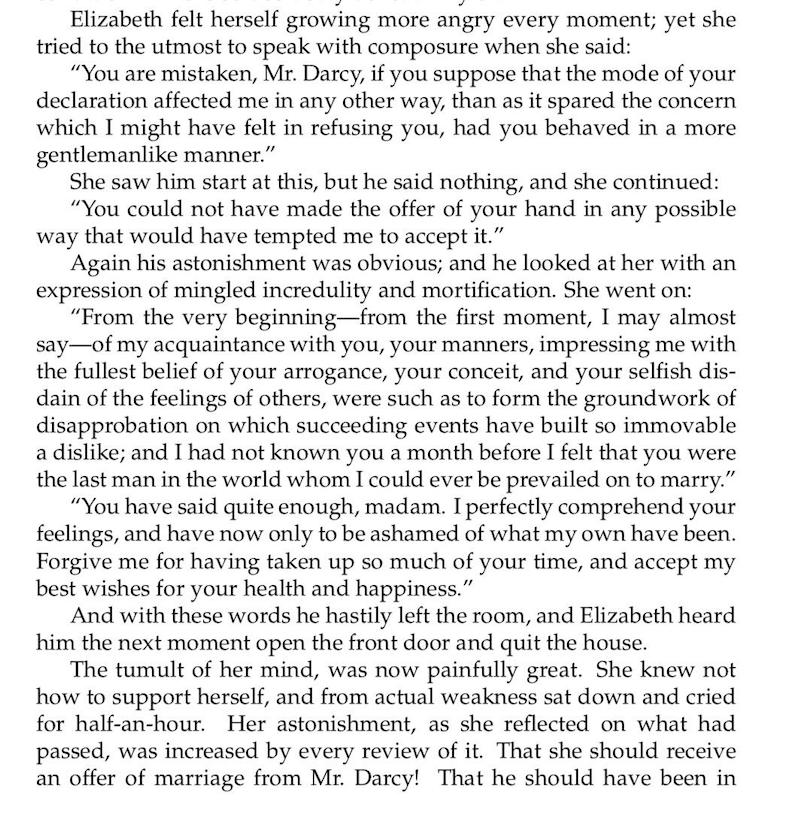 The book continues from there, but the takeaway should be clear. Things will never be the same after this moment.

I teach from this J. M. Coetzee novel in my Ninety Day Novel course. Does it meet the Kleenex Test at its midpoint?

At precisely halfway through the 66,019-word novel, Lucy says this of Petrus:

"I can't order Petrus about. He is his own master."

Given the post-apartheid setting, this is a cataclysmic change in social politics.

In The Great Gatsby

F. Scott Fitzgerald's masterpiece runs to 48,761 words. At 24,668, we discover Gatsby's crisis, as he is unable to make his dream a reality with regard to Daisy:

"He had passed visibly through two states and was entering upon a third. After his embarrassment and his unreasoning joy he was consumed with wonder at her presence. He had been full of the idea so long, dreamed it right through to the end, waited with his teeth set, so to speak, at an inconceivable pitch of intensity. Now, in the reaction, he was running down like an overwound clock."

At precisely halfway in the text, the quotation above is preceded by this:

"I could have sworn I heard the owl-eyed man break into ghostly laughter."

What interests me with the rendering of the midpoint in novels is this: The theme of the book is at this locus, halfway, and pinned to its belly button. Almost immediately after that, its devastating effect on the main character is served.

Applying to Your Writing

If you're writing a first draft, write to know the story. Then, before the second draft, use the Novelry's Editing Course to get your big theme and storyline down to a sentence-by-sentence style.

"The Editing Course is a safe homecoming for writers who've been sailing the choppy seas of the first draft. It's both pragmatic and inspiring - from how to lay out a manuscript for submission, to interrogating structure, dialogue, characters, sentences, words, hook...I know that, once I've completed it, my manuscript will be as professionally executed as it can be. And here's a weird thing - I shall be using the Editing Course when I construct my next novel. It's the only 'reversible' course I've ever encountered! Thank you, Louise." Susan Nott-Bower.

If you're on your second draft, have a think about the theme and the effect of the theme at the midpoint.

If you're about to write a novel, start with the midpoint and the action which devastates. That's the place to build your world around. So much that is great in fiction is built on the site of an old wound.

At The Novelry we offer writers tools, not rules. If using the midpoint works for you, great. But writers are an unruly lot...so choose what you use. The best position for innovation is one of education. Know why you're breaking a convention before you break it.

Louise Dean is the founder of the online creative writing school The Novelry. She is the author of four novels and has been published globally by Penguin and Simon & Schuster amongst others. Louise Dean has won the Society of Authors Betty Trask Prize and Le Prince Maurice Prize, and been nominated for The Guardian First Book Prize, and longlisted for the Man Booker Prize and the Dublin IMPAC Literary Award. She is the author of novels ranging from literary fiction to historical and her books have been reviewed worldwide and featured on Oprah’s Book Club. From high-brow to low brow, Louise is known for her ‘dark and fearless’ comedic prose style and her warm encouragement of her writers as a teacher. She was formerly a tutor at the Arvon Foundation, was winner of 2016 IDPE best newcomer for independent development professionals in education.

wendygoerl
This is an interesting observation--and in a way, how I write--but not all stories are so mathematically convenient. I call myself a "mushroom farmer"--mushrooms of story pop up, and then I connect them together into a book. Another way of looking at it is like classical celluloid animation: the most important cels are done by a "key animator," then "inbetween animators" use those key cels as a guide to draw and paint in the rest. The midpoint would count as a "key scene." So would the first and last scenes. The novel I'm currently working on started with the opening scene, a rough idea of where I want the book to end (the story promises to be a multi-volume saga), and 3-4 key scenes--which may or may not land anywhere near the midpoint of the book. (So far, the first key scene is tied into the story, I've got the novel almost up to the point of incorporating the second, the third is a few paragraphs waiting for the book to get to it, and the fourth is a fuzzy notion that may or may not become part of the book, depending on what the book looks like when it gets that far.)

heidi14
This is sooo good. I have missed this point entirely in past writing -- stuck on the ending or the opening as home base, and left floundering in the midpoint. Many of my bigger ideas spontaneously clarified themselves while reading the examples & your commentary on them. There's a message in here for life as well as fiction. Thanks!

kylemassa
Glad to hear it helped. Thanks for commenting!

dmelliott1
The Kleenex test - "I think you're probably not going to have your character crying more than once in a book," I would say unless your character is immersed in traumatic grief . a parent who has lost a child for instance. I remember Joe Biden saying he couldn't run for President because in his new state of grief he never knew when he would be overcome by tears. Usually there is a trigger. While some don't cry out of shock and numbness most cry all the time.