Turn Your First Draft Into a Story Readers Love

TAGS:
how to write a novel
story arc
narrative

“Tell me a story!” your reader demands. “I want to feel happy, sad, frightened. Take me to a new world and make me care about what happens next.”

Not so much. Any aspiring writer knows how difficult it is to draw in and captivate your readers. So how do you go from a first draft of your manuscript to a story that works and captures readers?

To help answer that question, think about some of the best novels you’ve read. What do you remember?

Like me, you probably recall a compelling character such as Jason Bourne, the intriguing plot told in Gone Girl, or the fantastic settings depicted in The Game of Thrones.

But more than that, you remember the story.

The Key to Storytelling

A story edit focuses on key story elements for:

During your edit, you'll take a hard look at your characters. How often do they appear? What are their goals? What gets in the way of their goals? Characters will drive the tension and emotion in your story and keep your readers engaged. You may end up changing a character's actions or motivations.

You’ll evaluate your plot for consistency and clarity. You’ll ensure your story arc is strong. You’ll look for plot holes, and you’ll end up rewriting scenes to improve structure.

Finally, you'll examine your settings. How often do you use the same setting? Do your settings help with the tone of your scenes? Settings are key to building depth in your story, so you'll want to make the most of them.

The effort you spend on a story edit will ensure your story works and is ready to polish.

A story edit may seem like a lot to think about. To make it easier, here are three key elements to begin.

Where To Start Your Story Edit

To perform an in-depth story edit, you’ll evaluate your manuscript on a scene-by-scene basis. For each scene, ask yourself:

Let’s take a deeper look at each story element.

Who Has The Point of View?

The POV you choose determines whose thoughts, emotions, and senses the reader will experience within your story. You want your reader to hear, feel, and see things from that character's point of view.

As the author, you are in control of how the reader experiences your story, so think carefully about who is telling it. The generally accepted method is to have one POV character per scene. Switching mid-scene is known as head hopping and can jar the reader from the story.

You can tell your story from several different points of view:

Whatever method you choose, handle it carefully. One reader may find the book hard to follow but not know why. Another reader might say they couldn't connect with the characters. Both opinions could be because the author changed the point of view too often, or without having a good reason to do so.

The genre you write in may influence how you balance point of view scenes. For example, in a romance, you might give the female and male protagonists (read: love interests) alternating scenes. It's helpful to know your genre's standards for POV.

What POV type will you choose?

When you choose a single point of view to write from, consider what it will mean to be consistent in that choice for an entire story (or several stories, if you’re writing a series). If you choose first person, for instance, you'll be describing that one character's thoughts and reactions the entire time. If you choose multiple points of view, you'll need to commit to displaying more than one set of internal emotions and motivations.

Do you write from the POV you’ve chosen?

Do you reference anything the POV character can’t possibly know? Remember, you want your reader to hear, feel, and see things from that character's point of view. If your POV character can’t sense something but you’ve written that they do, it’s time to start rewriting.

Do you plan to switch POV characters?

If you’re going to have multiple POVs in your story, it’s important to let your reader know this early on. It could be jarring for a reader to get halfway through a story and have a new character suddenly assume the main viewpoint. Changing POVs in the first few chapters will show the reader that this is your book's style and get them used to such change. They’ll expect different characters to have their say, drive the story, and provide surprises. They won’t get so attached to one POV character that they can’t bear the change and toss the story aside.

What Is The Purpose Of The Scene?

Every scene you include in your story must drive the plot forward. Every scene must have a purpose for inclusion, no mattter how small.

Defining the purpose of the scene allows you to address the elements of the scene (e.g. dialogue, setting, point of view) and see if they align with that identified purpose.

Here are some examples. You can choose one of these to define the purpose of an individual scene or come up with your own.

If the purpose of a scene is not driving the story forward, then ask yourself if it's worthwhile to include the scene at all. You may find it’s time to rewrite or even cut the scene.

Is The Setting The Best Place For Emotional Impact?

The setting is the place where a scene happens.

When you review each scene in your first draft, ask yourself if the setting is the best place for emotional impact. This one little question helps you:

When considering the proper setting for a particular scene in your story, think about the POV of the character or characters in the scene.

Let’s assume you have a character who is afraid of the dark and this character is about to have a confrontation with an employee. If you want the character to feel confident during the confrontation, you may place him or her in an office, where he/she feels strong and at comfortable.

If you want the character to feel vulnerable during the confrontation, place him or her outside at night, in an isolated parking lot. And make it very dark, with a broken streetlight and no moon. These traits will help set up a scene of dismay and hardship for your character.

If you’re ready to start your story edit, then Fictionary can help. Fictionary.co is an online editing tool that simplifies story editing.

Fictionary has created a better way to edit your manuscript with an automated approach that helps you evaluate your story against 38 key story elements for characters, plot, and settings.

Fictionary even draws the story arc and overlays characters for you. 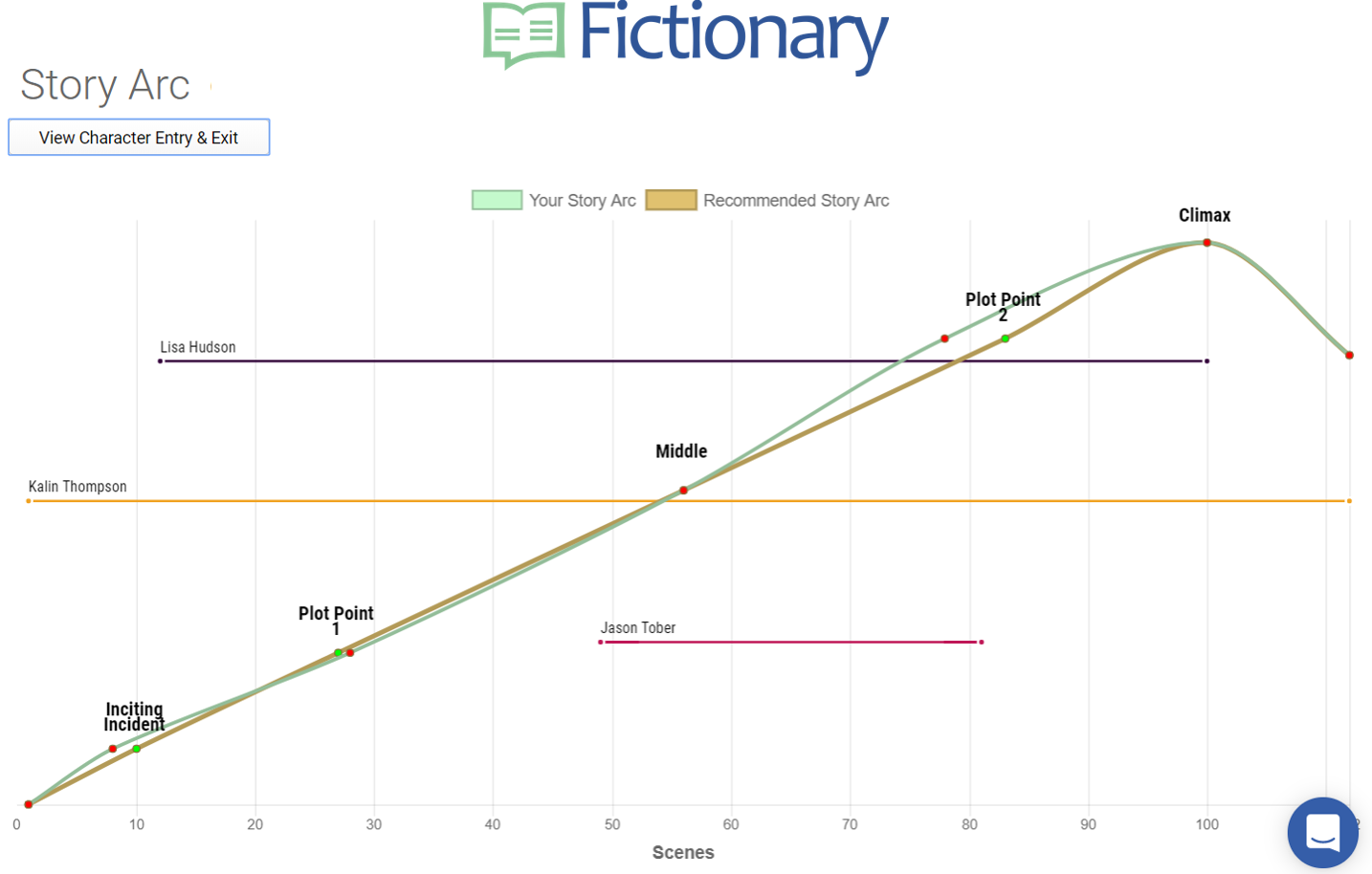 SPECIAL OFFER: Enter the coupon code "ProWritingAid"* when you start your trial and you'll receive 20% Off Fictionary. Offer valid until June 24th, 2018.

Kristina Stanley is the best-selling author of the Stone Mountain Mystery Series, the stand-alone mystery Look The Other Way, and The Author's Guide to Selling Books to Non-Bookstores. She is the CEO and founder of Fictionary, a company that helps writers tell better stories.

Kristina4
Hi Sionnach, Thanks for stopping by. I hope your story editing goes well. If you have any questions, let me know.

marria.ronner
This is very helpful, I am working on a book right now and am struggling a bit.

Kristina4
Hi Marria, Great to see you here. I'm glad the post helped. Let me know if you have any specific questions. I'm happy to answer them.