7 Things We Can Learn From Jerry Seinfeld About Writing

TAGS:
blogging
writing fiction
productivity
writing style
essay writing
where we write...
What we wish we had known 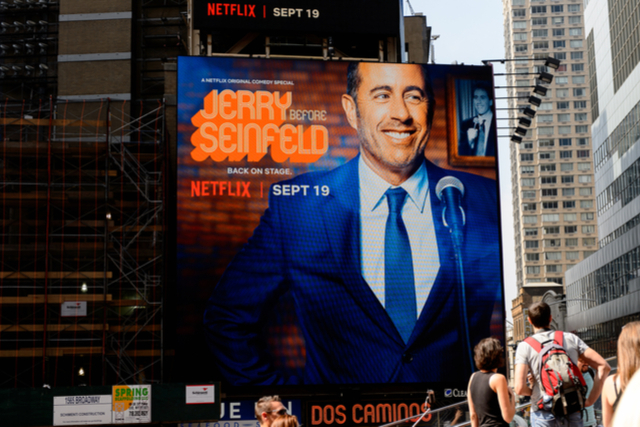 You can call me a Jerry Seinfeld fanboy. I grew up with Seinfeld, memorizing entire episodes thanks to syndicated reruns. As an adult, I enjoyed an opportunity to see Seinfeld perform live.

Earlier this year, Netflix purchased Comedians in Cars Getting Coffee, Seinfeld’s latest project. In each episode, Seinfeld interviews another comedian in a unique car and at a unique coffee shop. The show is a wonderful insight into the lives of Jerry Seinfeld and his comedian friends.

I consumed all 59 episodes of Comedians in Cars in three weeks. Throughout the show, a theme emerged: Comedians are writers at the core. Comedians make their money telling jokes on stage, but a significant amount of writing goes into developing each set.

Whether we focus on comedic writing, novels, personal essays, or poetry, we can learn a lot about writing from Jerry Seinfeld and the comedians he interviews.

Comedians are always writing. Their ideas are in perpetual progress, thoughts swirling in their head, jotting words into notebooks. In several interviews, either Seinfeld or his guest makes a joke then the other says, “That’s good. Write that down!”

Having multiple drafts in progress is a good thing. This allows ideas to marinate while perfecting details prior to publishing.

Seinfeld once worked on a single joke for two years before telling it to an audience. During those two years, he wrote and edited many additional jokes and bits, because comedians and writers cannot spend two years working on a single piece and nothing else. We need multiple drafts in progress and must always be writing.

Throughout Comedians in Cars Getting Coffee, Jerry Seinfeld turns observations about the world around him into new material. Like a well-trained spy, Seinfeld hears a waitress’ errant comment, sees a check set in a strange place, or overhears something happening at another table. He uses these observations as endless material to develop new jokes.

As writers, we need to train our brains to be receptive to the details of life. When we observe the world, inspiration will strike everywhere.

An overheard conversation might turn into a line of dialog. A stranger’s mannerisms might evolve a character’s traits. A Netflix show might inspire new writing advice. When writers keep their eyes open to the world, endless possibilities present themselves.

Instead of only noticing the world from a distance, scribbling notes into a book, writers must enjoy the little moments of life. Throughout Comedians in Cars Getting Coffee, Seinfeld is intently engaged with the person sharing the table.

“We’ve fallen into a trap of ever-widening orbits of contact, and there is a total disregard for the present moment.” — Jerry Seinfeld

I eat breakfast with a group of friends on Thursday mornings. The various diners we explore are treasure troves of inspiration, but the hour spent with friends is even more important.

Writers cannot only see the world, we must live full lives and enjoy every moment. Observations are one thing, but personal experience allows a writer to flourish.

4. Don’t Be Afraid to Get Real

Some of the best material comedians develop is self-deprecating. Sarah Silverman turned her cancer battle into a standup special. Chris Rock uses his ended marriage to set up punch lines. Like comedians, writers shouldn’t be afraid to get real with their audience.

“Comedians can take all of the bad things about themselves and use it to make people laugh.” — Chris Rock

While a comedian’s goal is to make people laugh, a writer strives for a variety of outcomes: laughter, knowledge, insight, emotion, etc. Whatever the goal, we must inject ourselves into our writing. Authentic and personal writing captures the reader’s attention and provides depth to stories and characters.

As writers, we can explore our personal experiences through words. If something difficult occurs, write about it. Work out the emotions. Something wonderful? Use that experience to inspire others. Whether the work is fiction or non-fiction, writers should strive to pour themselves into every body of work.

“All good comedy comes from a place of anger. Figure out what’s making you angry and work on it from there.” — Jerry Seinfeld

What bugs you? What drives you mad? Take that thing and run with it. Rant. Turn it into a piece of satire. Create a character who has that annoying trait to make the reader angry. Writers that get angry can use that emotion to develop their craft.

Throughout the 59 episodes of Comedians in Cars Getting Coffee, a similar path to comedic success emerges. When a comedian writes new material, they often workshop that set with a select group of friends. When the set feels polished, they perform in a club. For new comedians, it takes a lot of grinding and performing in clubs for free before they can earn money for their craft.

Writers should follow a similar path. While it would be nice to have your first published work become an overnight sensation, that isn’t the reality for the vast majority of writers. We must write and write and not be afraid to share our work with the people that care about us.

Writers must also avoid the trap of giving drafts to friends who will only provide affirmation. We must also share our work with friends who will be critical and offer relevant feedback. Our friends are a treasure trove of advice and criticism. When necessary, they can also provide a boost in confidence.

Jerry Seinfeld has been working as a comedian for decades. In the early days, Seinfeld wrote and worked in clubs. He broke into television and found success with Seinfeld before attempting movies and documentaries. While continuing to perform standup, Seinfeld attempted to tackle a new genre and created Comedians in Cars. Never one to settle down, Seinfeld is always looking for the next opportunity.

“Once you start doing only what you’ve already proven you can do, you’re on the road to death.” — Jerry Seinfeld

Writers need challenges. Growth comes from diversification, not from recycling the same content you wrote last week. No matter what genre you prefer, writers must seek opportunities to expand and find new challenges.

If you are a fiction writer, take a stab at non-fiction. Maybe try writing poetry. Or develop a character that is the furthest from anything you’ve ever written. As writers, we should strive to redefine and expand our skills. There is tremendous growth that occurs through challenge.

Jerry Seinfeld is famous for creating a show about nothing. Over 42 years in standup and 180 episodes of Seinfeld, Jerry Seinfeld has spent most of his life writing about situations that relate to everyone. No matter our background or preferred genre, writers of every station can learn from the legendary comedian.

The best writing advice we can learn from Jerry Seinfeld is to write often. About nothing, if necessary.

“Even nothing is something.” — Jerry Seinfeld in Seinfeld episode 49, ”The Pitch”

25d2dfcafbe9aa0ec435f01486746804@595343prowritingaid.com
Excellent advice. The bit about friends providing affirmation is relevant to me right now. I gave a draft to a friend recently, and he's almost finished reading it. He said, "Do you want me to be honest? I won't be nasty, but I'll tell it how I see it." I replied, "Yes, please. If I wanted insincere praise, I could write it myself."

martin20
People stress about topics, but actually, life is all around you. That's when you get creative!