Grammar Rules: Passed vs. Past 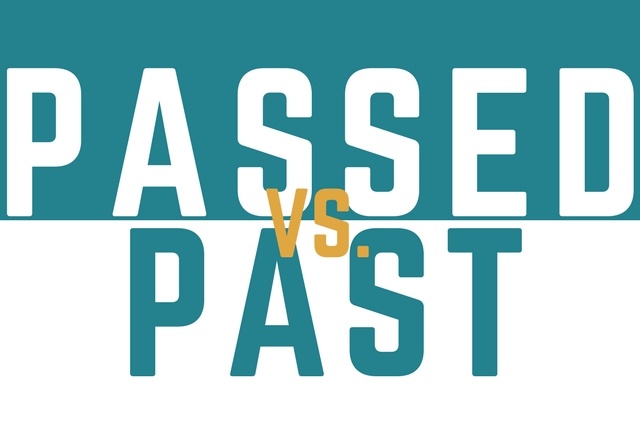 Homophones are fun, aren’t they? Unless they’re easily confused like "past" and "passed." What’s the difference? Let’s discuss these two homophones' difference and set the record straight.

The key is to understand how to use each word in sentences and learn what never happens.

Passed is the past tense verb of "to pass." Only ever use it as a verb in sentences.

Per the Oxford Dictionary, passed means:

Do you see how each of the above definitions uses action or movement? That’s because passed is only a verb.

Now let’s look at past.

Past is more flexible in a sentence than passed, but it is never a verb. Past can function as an adjective, an adverb, a noun, and even a preposition. Let’s look at the Oxford Dictionary’s definitions and examples taken straight from their blog:

The key? Passed is always a verb and past is never a verb. Now let’s see how you handle these difficult sentences:

The first two sentences have the contentious word as an adverb modifying the verbs "pushed" and "have gone." Since passed is only ever a verb, these sentences aren’t correct.

The last sentence puts past in the verb’s place, something past will never do, right?

So when you’re writing and you know you need a verb, used passed. When you want something other than a verb, use past.

Let us know in the comments below the most confusing homophones you grapple with when writing.

greyowl
Would you use the same argument for other homophones, like learned and learnt?

candyyork
This was brilliant for my 5th grader who just couldn’t figure these out, thank you!

romario.eich
Being a foreigner myself, it shocks me to know that Americans make mistakes such as this one, lol...

plumaetclepsydra
Very helpful, thanks! Maybe you can clarify correct uses of seated and sitted?