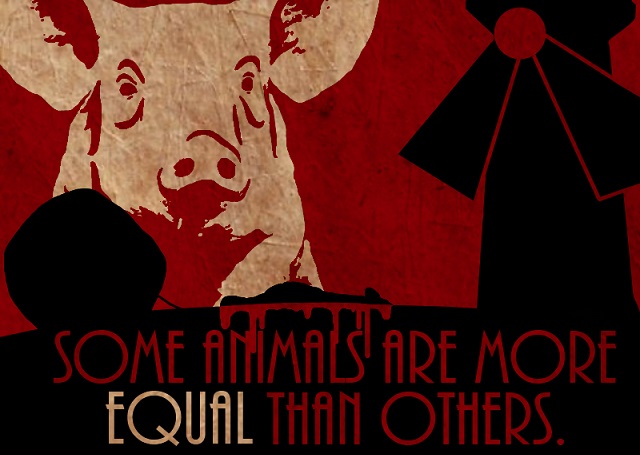 An allegory is a story that evokes two separate meanings. The first meaning is the story's surface, like characters and plot, the stuff that goes into every story. But at a much deeper level, an allegory has a symbolic, heavy meaning.

What allegories come to mind? Maybe The Lord of the Flies; The Lion, the Witch, and the Wardrobe; Moby Dick; or Pilgrim's Progress?

The most famous allegory, however, is Animal Farm by George Orwell. It's a flaming critique of the Russian Revolution. You have the rivalry between Snowball and Napoleon—aka the struggle between Leon Trotsky and Joseph Stalin. It's a stinging rebuke of how the one with more political power wins out over idealistic, but less powerful opponents. The pigs turn to violent government, becoming just like their original oppressors.

Let's turn to how you can write an allegory like George Orwell.

What kind of allegory do you want to write?

You can write something like Animal Farm that closely follows and cleverly mirrors an actual event. Or you can aim for a gentler human truth that becomes slightly surreal, like Shirley Jackson's The Lottery. (If you haven't read it, you can read it here.)

Either way you write your allegory, you must have something startling and important to say. Think about a moral lesson or deeper meaning you want to convey to your reader. For example, if you feel strongly about an issue in today's society, or even in history, you can represent it through fictional allegory.

How do you get started?

First, you plan your characters carefully.

Why, you ask? Because each character represents an element in your theme. Think of how each animal in Animal Farm represented someone involved in the Russian Revolution.

Since each character must represent a part of your theme, this affects how and why you introduce a character or figure. When reading an allegory, your audience expects to interpret the whole story and find meaning behind each character, action, and motive. You can't have an inconsequential, drop-in character who provides comedic relief. Each one represents something or someone else. Which introduces the next step…

Second, you need to carefully plan your story's arc.

The action in your story can't merely push your story forward; it must represent something. Make sure readers can interpret each action as representing an underlying element in your theme.

For example, in Animal Farm, each action the animals take underscores the story's theme: the corruption of socialist ideals in the Soviet Union. The animals overthrow their human oppressors, but just like in the Soviet Union, the pigs rise to power to replace the Czars/humans. Every action in the novella leads to the pigs eventually walking on two legs and imposing a violent government on the rest of the animals—perfectly representing Stalin's tyrannical rule and abandonment of the founding principles of the Russian Revolution.

Third, you must leave clues.

You'll dance a fine line between underestimating and overestimating your readers and what they can pick up as clues in your story. Think of it as a puzzle or riddle you're offering your reader. Keep one thing in mind as you write: all is not what it seems. So drop some visual and plot-related clues.

Let's consider an allegory about the Holocaust. You have rich visual images to choose from: railroad cars, tattoos or markers on clothing, barbed wire, smoke stacks, and more. Think of the stereotypical Nazi commandant or SS officer you can mine for pieces of the puzzle that in totality make a bold statement. Now consider how each element can be a clue leading your readers to an "aha" moment.

What's the "aha" moment in Animal Farm? Humans tend to maintain and establish class structures—even in societies purported to stand for total equality.

The key in your allegory is everything stands for something else, usually something dark. As such, you must have a clear idea where you're headed or your reader won't stand a chance.

Don't sacrifice your surface story trying to make your deeper one perfect. Your story must engage your reader and stand on its own, which can be quite challenging when it's a cover-up for a deeper understanding. Allegories are tricky to write, but they're incredibly satisfying when you've done it right. Especially if you have something you've been dying to say.

And with the current political climate around the world today, the time is ripe for a great allegory to blow everyone's socks off. Enough said.

Let us know in the comments below what your favorite allegory is and if you've ever considered writing one of your own.

viviennemendonca
Dear Kathy, Thanks so much for this post (I've just seen it, although you posted it a while ago). I want to write on the theme of imperialism and colonisation - justification and effects. Originally, I was planning to do a kind of futuristic (science) fiction but I was really struggling to get a realistic futuristic world (I'm not into sci-fi). Then I came up with idea of an allegorical story and found your post in a search.It may not be any easier, but I'll give it a go. Thanks for the advice and example from Animal Farm.

KathyEdens
Hi, Vivienne! So glad you liked the post. I think our world today is incredible fodder for an allegory. And I'm sure someone (maybe you?) will write it. Best of luck. --Kathy