Are You Ignoring Your Best Ideas? 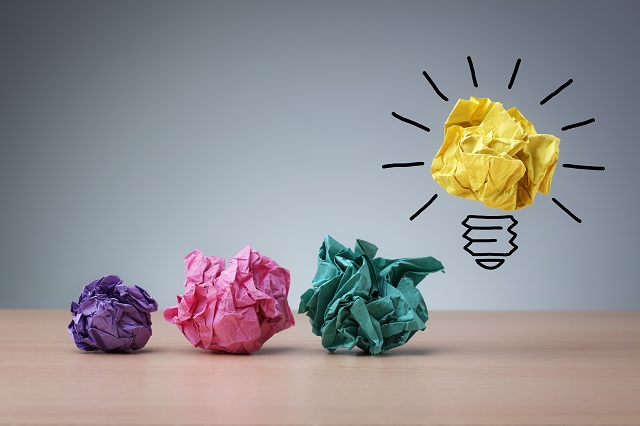 Feeling uninspired? Frustrated? Bored by your own writing? You could be suffering from the toll of ignoring your best ideas. ‘But why on earth would I ignore an idea if it’s good?’, you’re wondering. The answer is that you probably don’t even know you’re doing it.

Have you ever found yourself getting lost again and again in the same daydream about a fictional world or character or ‘what if’, only to shake your head and forget all about it? Is there a scribbled sentence or two in your notebook that you keep re-reading but never expanding on? Those are the ‘ignored ideas’ I’m talking about it – potential story-starters that never actually start anything. The little sparks of imagination that keep niggling at the back of your conscious mind. Well, in this article, I’ll delve into exactly why those great ideas get left by the wayside, and how you can go back and find them.

It’s important to point out early on that there’s a difference between a good idea and one that’s right for you. While it’s possible that your favorite daydream is a great idea you shouldn’t ignore, it’s also possible that, deep down, you know it isn’t right for your style of writing. Let me delve into an awkward adolescent memory to illustrate what I mean.

When I was fourteen, I fell in love with a dress in a magazine (you know, back when teenage girls still bought things they saw in magazines), and I mean head-over-heels. After weeks of gazing lovingly at my clothing-crush blu-tacked to the wall, I finally had enough money saved up to buy it. I hopped eagerly into the car with my mom to go to the store, grabbed one in my size, and rushed to the fitting room to meet my dress destiny. And you know what? It looked terrible on me. I was crushed. Here was the dress of my dreams, and here was me with totally the wrong body-shape to do it justice.

The point is that, even if your heart is set on a particular genre or idea, if you’re struggling to make it work for you, it might just be the wrong fit for you as a writer. On the other hand, there are plenty of reasons why great, suitable ideas don’t make it onto the page…

How your best ideas get ignored

No writer is in the business of ignoring great ideas, so how exactly do they so often get pushed to the side? In fact, there are two main reasons, and they both emerge from what an author thinks they ‘should’ be writing.

You’re thinking too much about a specific audience

It’s common advice to writers that they shouldn’t try to tailor their writing to an audience that’s too specific. Some even say you shouldn’t think of any audience at all when writing. The same advice is applicable when choosing which ideas to pursue or ignore.

You’ll probably find, as author Catherine Ryan Hyde did, that your ideas reach out to the appropriate audience, even if that’s not the audience you expected.

Sometime around 2006 I decided I had missed my true calling as a young adult author […] Yet after five novels with a Young Adult publisher, it became clear that the books weren’t quite finding their audience. A segment of mature teens enjoyed them, but they seemed most popular with adults. Maybe I really was writing Coming of Age fiction after all. […] When I first wrote my novel Chasing Windmills, it was intended for a YA audience. It was written from Sebastian’s point of view only. And Sebastian is seventeen. I submitted it (through my agent) to my YA editor. She said she liked it, but didn’t think it was YA. I revised and expanded it, adding Maria’s viewpoint. Maria is in her early twenties, has two children, and lives with an abusive boyfriend. That, of course, made it much more clearly adult. […] One of its first reviews was in School Library Journal, who labeled it “High school through adult.” In other words, it crossed over to YA. In other words, I don’t always know who I’m writing for.

– Catherine Ryan Hyde, from ‘How To Choose A Genre When Writing (Sometimes The Genre Chooses You)’

You’re thinking too much about a specific genre

Genre-fiction is sometimes looked down on, and while this sniffiness is totally misplaced, there can be such a thing as writing too in-genre. In fact, it might be better to let the genre find you, rather than the other way around. Otherwise, the constraints of fitting your ideas into a certain mold may squeeze out the best of the crop without you even realizing. Once you start off with an idea rather than a genre, you may even find that you don’t actually need a genre at all.

So, where are your best ideas?

You know how the stereotype goes. After years of long and arduous questing, physical and personal growth, and more battle-scars than fingers and toes, our hero finally reaches their journey’s end, only to discover that the answers were inside them all along. It’s frustrating, but similarly, your best ideas could have been lurking in your subconscious, hidden among your forgotten journal notes, or nestled as motifs, themes, or subjects that you’re constantly returning to in your writing this whole time.

How do you root them out? Don’t follow your head; follow your gut. Trust that tingling feeling you get when you hit on something you find interesting. Need proof? Read Romance-turned-children’s-author Allison Tait’s first-hand experience:

I never imagined I’d be an author of children’s books. […] I was working as a features writer at a major women’s magazine and I approached my fiction in much the same way as I would approach an article. I looked around to see where my “market” might be and I decided I would write to “target” them.

And so I began writing romance novels. I figured that they made sense for me – there were definite market segments, I had the right “voice,” I’d read shedloads of romance novels in my late teens… how hard could it be? As it turned out, it was a lot harder than I thought. […] I have two boys […] and they are both fans of the “head-hurting” question. We have long-and-involved conversations about where space ends, how high the stars are. […] Several of those conversations, close together, led to an idea that left me with a strange, tingling feeling. […] And so began the wildest ride of my writing career. Writing The Mapmaker Chronicles: Race To the End Of The World was the most fun I’ve ever had sitting at my desk. I LOVE writing for children, and I might never have discovered that had I continued to ignore that crazy idea just because I’d never done it before.

– Allison Tait, from ‘Are You Ignoring Your Best Ideas?’

As Allison’s experience proves, your best ideas can come from everywhere and anywhere. Keep your mind open, daydream as much as possible, and always have something with you to write notes on.

Your best ideas should flatter your writing

Your best ideas are almost certainly those that excite you most – those bound up in the ideas that you just can’t leave alone. Happily, your writing style is a similar expression of self. When the two mesh, each will improve the other, drawing as they do from the same pool of experience and passion.

It’s your job to make sure they meet, and all you have to do is shed your inhibitions. Focus less on genre, target audiences, trends or dead-end ideas, and follow those tingly feelings instead. You never know where they might lead you.

Have you ever realized you should be writing in a different genre or for a different audience? How do you filter your ideas to find the best ones? Let us know in the comments or, for more on getting the most out of your ideas, check out How And Why You Need To Recycle Writing Ideas and Understanding Cultural Trends Can Help You Write A Bestseller.

Hannah Collins is a contributor to the Standoutbooks blog. Since graduating from Lancaster University in England with a joint degree in Fine Art and Creative Writing, she currently splits her time between writing, drawing, designing, podcasting, and working across the libraries of South Wales, where she and her ever-growing comic book collection also live.